FuboTV announced that it signed a multiyear distribution deal with Disney to bring ESPN to its service, filling in the missing link that could make it one of the best over-the-top live TV streaming services available for sports fans. I just signed up for Fubo and was told at the end of the month, they would be adding some new channels (listed below) but when I added it to TVEverywhere, they were already there. [FuboTV’s $54.99 standard subscription plan] will now get ESPN, ESPN 2, ESPN 3, ABC, along with access to many other Disney Television Studios channels.

I have Fubo family plan and Fubo Extra which cost me 5.99 per month more, but gave me some channels the family said were must haves and allowed me to drop Philo since the channels we had for it were now included with these two plans. Just thought I'd share the news. I now get 155 channels with TVEverywhere and have included screenshots with this post. I'm not the best at taking screen caps but it will give you an idea of the channels I receive. 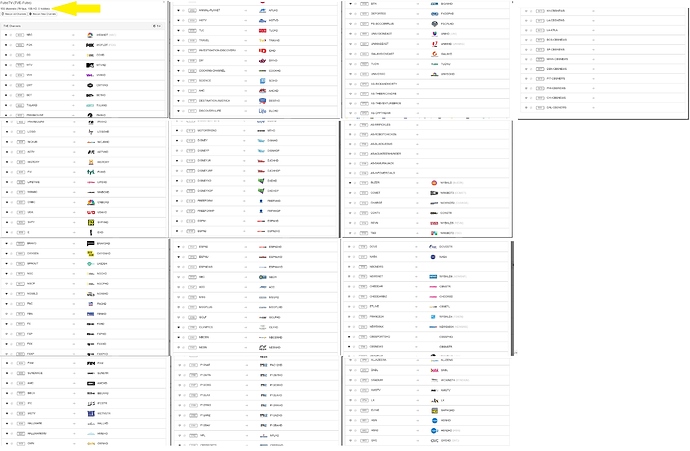 Did you miss the part of their announcement where they raised the lowest price to $64.99? I don't think they are going to keep offering anything cheaper.

Yeah, I read that but when I asked the operator, I had to call because for some reason it gave me the Latin Fubo channels instead of the Fubo, I specifically asked when the new pricing goes into effect and he said they have additional changes coming soon but wouldn't expand on what and it is then it will increase. He said it wasn't the addition of these new channels. Of course I was speaking with David, who sounded like he was from India, so I'm not sure he'd really know anyway as these call centers aren't always on top of new changes.

I am not seeing the ESPN channels added yet. I have rescanned multiple times and even removed and re-added fubo as a tve provider.

Maybe it's only allowing new subscribers to see them now. It isn't supposed to happen until the end of August is what the operator told me, so perhaps that's why. You can plainly see on my screen captures that they are there for me. Perhaps give them a call and tell them someone told you that ESPN was available now on Fubo and perhaps they'll flip the switch for your account too.

On the Fubo website, there is a blurb about the new channels starting today. The DIsney/FX/ESPN channels showed when I individually scanned the channels. Both east coast and west coast feeds are currently active on my account.

Yes. I see them in the Fubo app, on the Fubo website, and I can use my Fubo credentials in the ESPN app to connect. The only place where I'm having an issue is in TVE in the Channels DVR.

Is there something else I can do in the DVR to get it to try to log in differently?

I had an issue similar once with YouTube TV so I cleared my computer's cache, and the cache within Channels DVR and then added YouTube TV back and the channels came back. It's worth a try.

I see them in the Fubo app, on the Fubo website, and I can use my Fubo credentials in the ESPN app to connect

How about ESPN's site? Channels' TVE implementation will only work if you can access the network through their website, not their app. (Often, the apps connect differently and use different feeds than are used on the website.)

Also not a bad idea to update to the latest pre-release of the Channels DVR software by click and hold the Check for Updates button on its web UI.

Thanks chDVRuser- that did it. I was on a June release of the raspberry pi DVR and updating just now got me a July 30 build and all my missing channels.

Just checked back to see if you got it working and it seems like you did. This to me is a game changer since I love sports and now I have 55 channels of sports to pick from. The family is happy too so it's a win/win.

Glad to hear it. With TVE issues, always best to get the latest pre-release version before troubleshooting further.

and there was a macro in Keyboard Maestro I think.

Fubo looks like better alternative for directv than YTTV now.
Pity there is no AXSTVlive stream and no BBC World News. I wouldn’t mind if Channels took their domestic feed from iPlayer website - its free and 90% programming is the same anyways.

This is probably the only one service that has now sports and A&E. However they drop Turner.

How about ESPN's site? Channels' TVE implementation will only work if you can access the network through their website, not their app. (Often, the apps connect differently and use different feeds than are used on the website.)

Not necessarily- feed may be the same but exposed link might be different depending on device. This is the case with Music Choice. I am currently working on extracting their audio links and it has to be done with request simulating mobile device. Authorisation in the browser gives you valid service only for 4 hours while mobile device gives you 30 days.

After reading this is signed up for fubo ultra for a month. I cant get any of the espn channels or sec network to appear in the guide among others. I think I am short 40 channels. I have tried everything in the thread. They do however appear in the fubo app.

If that doesn't work, post the Channel and error from that screen, like
6039 TCM not in subscription

Your suggestions got me from 131 channels to 156 but I think there is 20 still missing like Tennis, weather, NBATV, nlfredzone, MLB. Some I am not sure of. Does FuboTV carry CNN TBS TNT? Again I have the ultra package