It would appear they are sold out.

Thanks for the tip. I was able to order one earlier today. I wonder if new models are imminent. I’ve read the Prime 6 has been long promised, but I’ve not read of any new Connect models.

I doubt it, but an OTA model with more than 4 streams would have to be gigabit.

While technically ATSC streams can be up to 30Mbps, rarely will they ever peak above 12Mbps, and in reality will be more like 5–8Mbps.

In reality, this is not true.

This is three streams on the same HDHR. At nearly the same time: 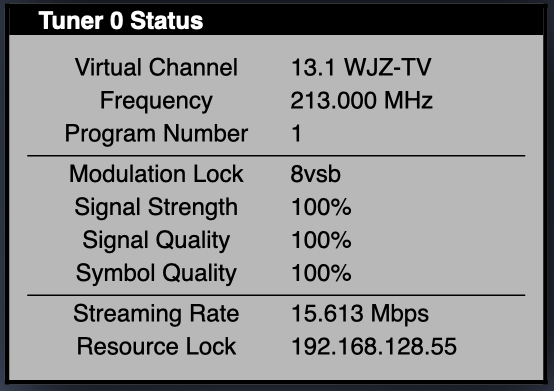 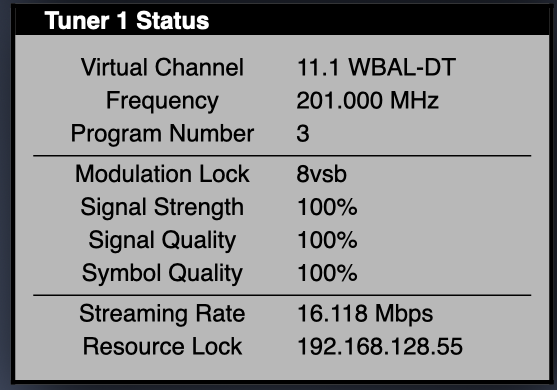 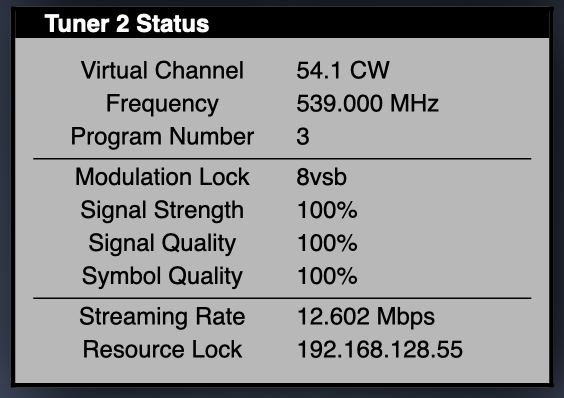 It depends on the program, the resolution, and the number of subchannels. But some of these channels are regularly above 12mbps, occasionally peaking over 20mbps. It is not wrong to say that if SD is going to put more than 4 of these on a single HDHR, they need to have networking that can support the peak rates.

This is why I was willing to spend $5 for LOCAST since the streams are MUCH smaller and work extremely well over remote connections. And we are happy with the quality. At this point with TVE and LOCAST all of my streams are MPEG4. However, my son-i-law prefers the OTA because of the DELAY imposed with all of the streaming options including LOCAST of course.

Well, the streams are transcoded by the DVR for remote connections, so the bitrate of the full-quality stream is not an issue. What I was referring to is that SD is still putting 100mbps network interfaces on all of their HDHomeRuns. If they go any bigger than the current Quatro model, they have to upgrade the nic.

They even put a 100 mbps on the Scribe Quatro which also does the recording and streaming to devices. Which if you have other connect tuners it will also record of those to it's internal HD.

Right. I would not expect them to ever go over 4 with the OTA model. You can always just use 2 or more. But the PRIME where you pay monthly for every CABLE CARD you get (most providers) and the CC supports 6 streams it makes sense to provide a 6 turner version. And of course the streams are also MPEG2.

I agree transcoding can be used and the overhead on your DVR takes a HIT. For me the HIT on the DVR is not worth it. I assume you do not use the transcoding on your local network and on recording the streams which use less disk space with MPEG4. And I agree the cost of disk space is cheap. All in all it just makes sense to me to "natively" use MPEG4 Streams. BTW... The argument of Apple TV not using gb nic was an issue until the Apple TV 4K where they finally added it.

I don't usually have more than 1 remote stream at any given time... since I am the only person who really uses remote streaming in my household. And my DVR can easily handle transcoding a stream while recording and playing back other channels/recordings. But my setup is mostly used for watching at home. I have a lot of disk space in a RAID-6 array. I don't watch enough TV to get anywhere close to seeing all of the recordings there. It is more like a catalog of high quality recordings that someday I might feel like checking out. I do use all ATV4K (for the gigabit), but I wasn't even talking about that. I was talking about the nic in the HDHomeRun.

I can see where something like Locast is useful for people who want lower bitrate streams. And that is great for anyone who wants it. But SD offers the OTA HDHomeRun models that are specifically for people who want OTA streams at OTA bitrates going to their HDHomeRun. You are right, there is no good reason to go over 4 streams. Not only is using multiple HDHomeRuns easy, but it allows additional configurability for OTA users. I like having multiple HDHomeRuns too, since it allows me to use two different antennas pointed at different broadcast towers. I was replying to a post from someone saying that SD might be planning an upgrade. I was saying that an upgrade would be unlikely. But doing, say 6 streams, which could hit peak bitrates of over 120mbps is going to cause problems if the device only has a 100mbps nic.

I understand and agree they should have gone with GB NIC's on all of there devices at this point in time. Some say this is maybe the all in one chip? Who knows maybe the Prime 6 Tuners which has been promised forever will have GB.

The prime is a cablecard tuner. Cable companies often use aggressive compression; each stream is nowhere near the bitrate of OTA. So they don't necessarily need it for a 6-stream cable tuner. They need it for 6-stream OTA, though. It is apparent that SD has a difficult time resourcing hardware.

They've already announced the 6 tuner will be 100mbit.

Was that announcement before 1000mbit was invented

The old one is gigabit, but the new one won't be.

Same deal available at B&H today. Backordered but I believe you can still check out. 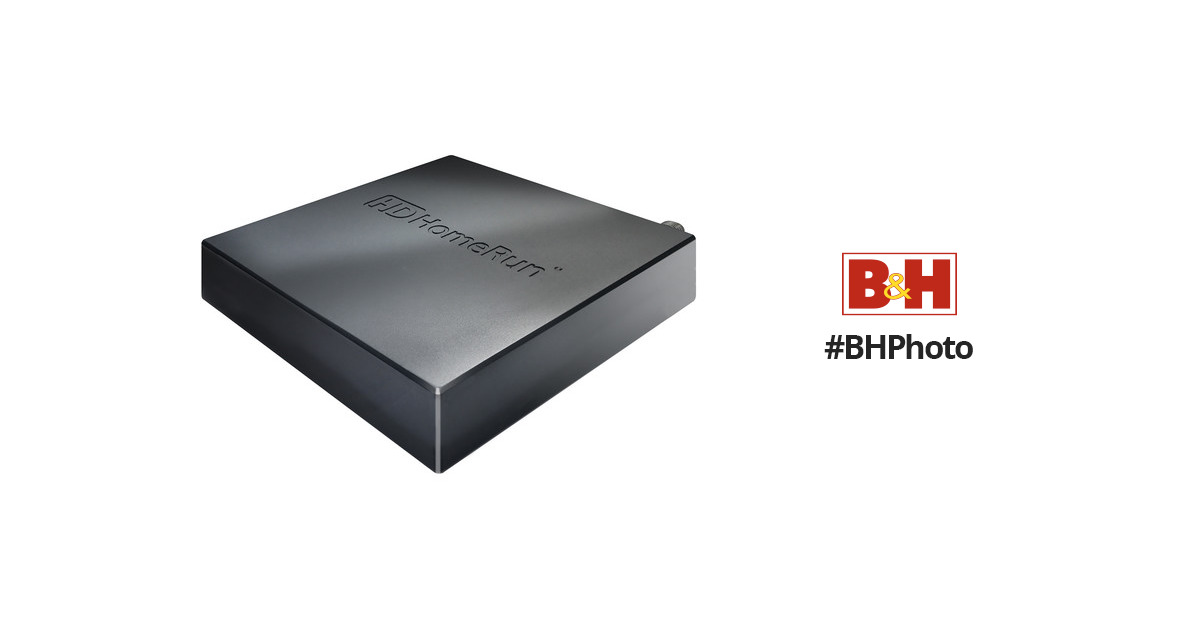 Buy SiliconDust HDHomeRun CONNECT QUATRO featuring Cut the Cable & Save on Rental Fees, Watch Live HDTV on 4 Devices, Works with HDHomeRun DVR Service, Pause on One Device & Resume on Another, Send Live TV over Existing Wi-Fi Network, For Use...

Silicondust has them on sale ....