I'm running Channels 2022.02.09.0020 and have a few annoyances with local content I've imported as an additional media source. I don't want to bug anybody about this if it's still considered "beta". But it's not identified as such in the settings UI, so just wondering.

(The annoyances I am seeing are mostly around matching for metadata.)

Update to the latest pre-release.
Or you could read about all the pre-release changes since DVR Pre-Release Notes - #251 by tmm1

Feel free to let us know what isn’t matching. Please provide a directory structure and example file names that you are using.

The main problem I'm having with my local content is TV series that have been rebooted under the same series name.

(I've tried a few variations of directory naming. This is what I currently have.)

In the Channels GUI, this shows up as a single TV show with all the episodes from both of them mixed together:

You can see the file paths on the right-hand side, but the matching metadata sees everything as the 1975 series. I can do "fix incorrect match" on the entire series, in which case they all show up as the 2020 series.

If I try to do "fix incorrect match" on a single episode, the only match offered is the already-matched incorrect one. 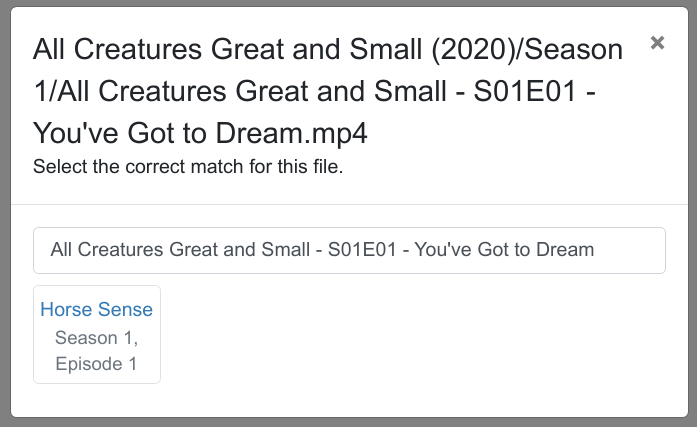 I've tried fiddling with the title a bit in the search box, but no joy. After fiddling, it sometimes decides there is no match.

Since this only applies to a small number of rebooted TV series, I'd be satisfied in somehow fixing things outside of the UI, if that is an option.

I’m pretty positive that your naming convention is wrong. Put the origin date on each episode like you did in the root folder.

I'm also curious what the fix is for this as I have similar issues with mine.
One thing I have found is that when fixing the match for an individual episode, change what's in the search box to the Episode Title only.
i.e. edit it to just You've Got to Dream

i.e. edit it to just You've Got to Dream

That didn't work for this case (I also tried one with no punctuation in the episode title, just in case). It just turned into "no match".

The ability to split matches is partially implemented. I will take another look and see what needs to be wired into the UI for this use case.

Thanks for the suggestion, but no joy. (I only renamed one episode like that, and I chose episode 3 because it has no punctuation in the episode title, just in case of a parsing bug somewhere.)

As a temp workaround, name one of the folders something random and unmatchable--like litterally just mash the keyboard. Then when it scans and cannot find a match, do the fix. Not ideal for the backend, but at least will fix your frontend problems.

I think they have added or will soon add unmatch for shows/episodes.
It's a pain when it auto-mismatches imports.

The latest pre-release has a button to remove the match for movies. We’ll work on doing the same for an imported show.

As a temp workaround, name one of the folders something random and unmatchable--like litterally just mash the keyboard. Then when it scans and cannot find a match, do the fix. Not ideal for the backend, but at least will fix your frontend problems.

Ha. I thought of that after my original post, but I read your suggestion before I got a chance to try it.

If nothing better comes along, I find that to be a completely acceptable workaround.