On Later only showing 5 days of programming

On Later->Upcoming Movies shows 5 days of upcoming movies, but Live TV->Guide shows 15 days. I much prefer selecting movies to record with On Later than the Guide, because with the Guide I have to page through each day broken up into at least 3 sections by hour.

Perhaps this is something to do with my setup? I don't recall seeing this when I was on the regular release.

Hmmm - just noticed while moving through the Guide that I had already marked some movies for recording well past the 5 days showing in On Later. I must have marked them recently using On Later, since I never use the Guide for recording. I reckon that means for some reason On Later [edit: corrected 'Guide'] is now cutting off at 5 days when recently that wasn't the case. Or perhaps it just stopped updating around 10 days ago?

On Later is going through some changes. You can read about them here:

This is a long time coming. We first did a pass at On Later years ago. We weren't happy with it but eventually just put it out on the web admin. It sat for a while, then we tried to improve it again. We weren't happy with it. Well this year we took another stab at it and we think it's ready for prime time. Previously, your favorite channels helped inform On Later to show you content that would suit you. This wasn't great as most people's favorites are set on their client. This also isn't a grea…

Thanks, in fact I had read about those changes before I posted.

I just re-read and found nothing about shrinking the days to 5. Is that what's happening? This must be a bug, right? Can't be a feature, hah-hah!

It's not necessarily a bug, as much as fall out from the changes in how we pull the movies to show. We'll look into it, but right now we're showing a max of 500 items, which is a lot.

IMHO it's a bug. My On Later->Movies is showing 83 Movies total. May be interesting that the last movie pulled is from a non-favorite, non preferred channel. All other 82 movies are from TCM.

Correction: I found a few more that are non favorite, non preferred.

Besides the fact that there are now only 5 days worth of programming displayed, some of that programming is from channels I don't want to display on On Later. I'm fairly sure - but not certain - that there were no other channels but TCM (my preferred & favorite channel) populating On Later->Movies until this change.

My 2 cents: with all the supposed benefits of what gets surfaced, I nevertheless think it'd be a good thing to also implement a user specified override to only display programming from user selected channels. Whether by explicit filter or favorite or whatever. That filter should of course be used before the limit of 500 is enforced. Otherwise a bunch of unwanted stuff would limit the desired programming. Thanks!

OTOH if the plan for On Later drives it farther away from being a browse-mode Guide (which is how I try to use it), may I suggest enhancing the Guide to offer a browse-mode in addition to the current Grid layout.

By browse-mode I mean display as many titles as are available in either icon or line view for one channel at a time. It would look like On Later but only display programming for a selected channel. Wouldn't need a Grid because only one channel is displaying, and it could be a purely recording oriented interface for each selected channel. That would be a much easier way to select titles to record, and wouldn't disrupt the feature rich plans for On Later..

On Later does provide a browsing experience. Check out the movie and tv show links that are provided now.

Please submit diagnostics, as you should be seeing more than 80 some movies.

How do I submit diagnostics?

In the DVR web UI, navigate to Support > Troubleshooting, and click the Submit Diagnostic Logs button.

Although the movie and tv show links were staring me in the face, I never noticed them. hah-hah!

Still, there's no way to limit to a single channel. I set Preferred Channel to TCM, but that doesn't prevent other channels content from being included. And it's still limited to 5 days, but I will try to submit diagnostics once you tell me how. [Edit: just got the instructions].

Also there is a complaint about Chrome version I hadn't noticed till now: 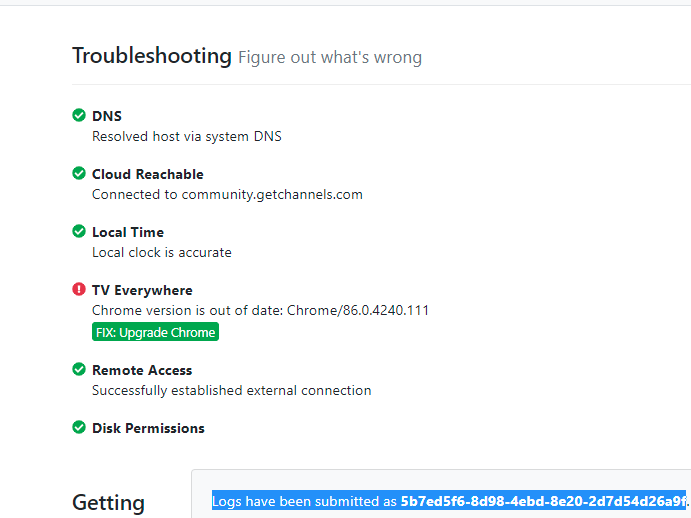 Does that actually matter? Also according to the Google docs, since there is no Click Update Google Chrome button visible, I'm on the latest version. Edit: moot, I just clicked the Fix: Upgrade Chrome button and he isn't complaining anymore.