I just Emailed TNT to complain. Doubt it will do any good. I looked at all their cable logins and no OTT provider showed up. I know this goes against everything I have said, but find a friend or relative with a login. You are paying for the channel.

I'm in the same boat with YouTube TV. Same with them for all Warner networks as well. Its a shame PS Vue couldn't stick around but there is no better provider for TVE support. I guess the cost is to much to add TVE to their agreement.

you might REALLY want to make sure it is 1080p. All broadcast\cable channels have chosen [email protected] or [email protected] ("i" for interlaced...not "p" for progressive). Broadcasting at [email protected] would really test the station's capability. Plus...it would be changing the original format of the material. Original content for CBS is in 1080i.

Well, looked it up and interestingly enough, ATSC does allow for 1080p30 and 1080p24 broadcasts. I was under the mistaken impression that progressive was limited to 720p.

I was testing the TVE interface today with CDVR and recorded a portion of a NASCAR race in 1080p. Mediainfo claims the framerate is "variable." Is it possible they are actually transmitting that at 1080p 60 frames per second at just under 4000 Kbps?

All networks offer their content (besides sports) free online.

How would I go about watching the local news on each station in Milwaukee online? Or maybe America's Funniest Videos?

Every news service where I live has their news online, go to their website. America' s funniest is on the ABC website.

I was testing the TVE interface today with CDVR and recorded a portion of a NASCAR race in 1080p. Mediainfo claims the framerate is "variable." Is it possible they are actually transmitting that at 1080p 60 frames per second at just under 4000 Kbps?

I don't how it would cost more, you would think Warner would get more as revenue watching on their apps.

This is not true. Keep in mind that nearly all major motion pictures are filmed at 24fps. This includes action movies.

From wikipedia, they broadcasters can switch between resolutions and sometimes do 1080i60, 1080p30, 1080p24. Sometimes they run a lower fps broadcast with 3/2 pulldown to stay on 1080i60. But primetime shows are mostly all filmed at 24fps.

Sports are not action films. Or motion pictures. And are filmed in real time. [email protected](frames, not fields), looks horrible for sports. Sling TV, for example, still has NFL Network in [email protected] There is a noticeable stutter on the ticker on the bottom where the words are blurred, and the football games show a lot of artifacts and trails.

Streaming providers can only do progressive frames, not interlaced. So, to make things smoother they up their sport channel to 60 frames per second....because they know 30 fps looks horrible. Otherwise, they would just keep the 30 fps to save on bandwidth. You can google, "Does so-and-so-streaming-provider-have-60fps"... and most providers give a list of channels they have in 60 fps. Because they know only the 60 fps channels will give a smooth sports showing.

I don't think it is significantly noticable. I watch sports on NBC and CBS all the time. In fact, the Ravens game this past Sunday was on CBS. And it looked fantastic, at 30fps. 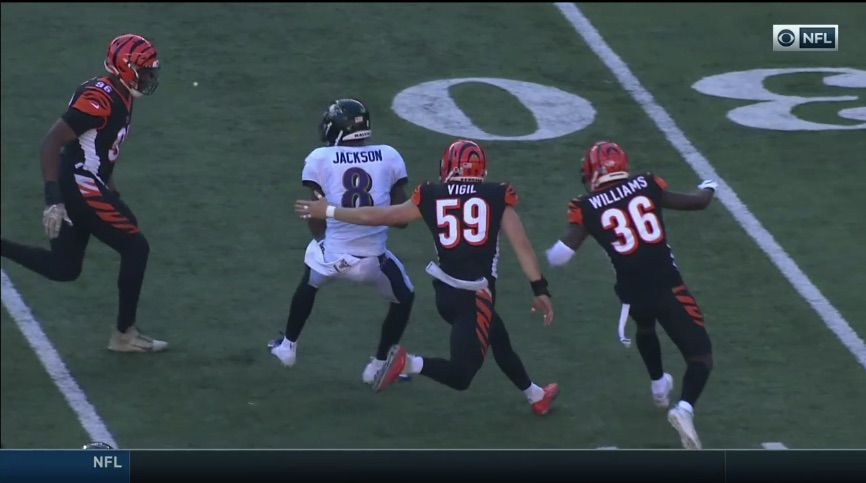 CBS uses [email protected] interlaced (the "i") means 2 fields per frame. So at 30 frames, that is 60 fields per second. So the eye still doesn't miss much.

[email protected] is what streaming services sometimes use because they cannot interlace frames. progressive (the "p") mean 1 field per frame. So at 30 frames, that is 30 fields per second. Which is what looks horrible.

interlaced fields or not, it is 30 TOTAL full still frames per second.

I think the streaming services look bad because they degrade the quality in other areas.

The difference is what is in the full frame.

As oppose to progressive... where it just produces one full frame at a moment of time. One field per frame, nothing being interlaced together. So if it is going slow enough (below 60fps), you can notice stutter and trails.

Channels deinterlaces mpeg2 1080i60 during playback to generate 60 frames (one frame per field).

Wow, I would have thought it deinterlaced to 30 frames. If 1080i60 is 60 half-frame fields, where does Channels get the other half to deinterlace to 60 full frames? I am guessing that it duplicates the half-field of the frame just before or just after?

Just signed up for Sling blue and noticed you get CNBC and MSNBC on the $25 plan. No need to pay for the add on if you want those channels