Scrubbing on AppleTV really bad in last couple of months

Just did on the new beta. Unless you meant the next time it happens.

I’ve had the same problem in both channels and acorn TV apps on Apple TV. Seems if I uninstall then reinstall the app, the problem disappears for quite a while. So when it comes back, I just uninstall and reinstall again sad

I have run into these same issues starting a few months ago as well. One issue I also see happen frequently is the skip fed/rev functionality stops entirely where I press the right or left side of the remote and it doesn’t skip. Instead it will act like I pressed the center of the remote. This seems to happen when I have been using channels, then put the ATV to sleep, then come back the next day or so and watch more TV. I have to kill the channels app to get it back to normal and then scrubbing works.

Mines the same on ATV4, over the past few months I’ve noticed that channels has gotten progressively worse, having to force quit, constant stalling, so much so that I’m considering not renewing my subscription this year. I’ve had to result in using Plex dvr instead which is not what I’m paying a subscription to do.

This is getting bad. Fast rewind, holding the trackpad turns the screen green and stays there. Trick play stops responding and it keeps rewinding.

And no, it’s not the hdmi cable. 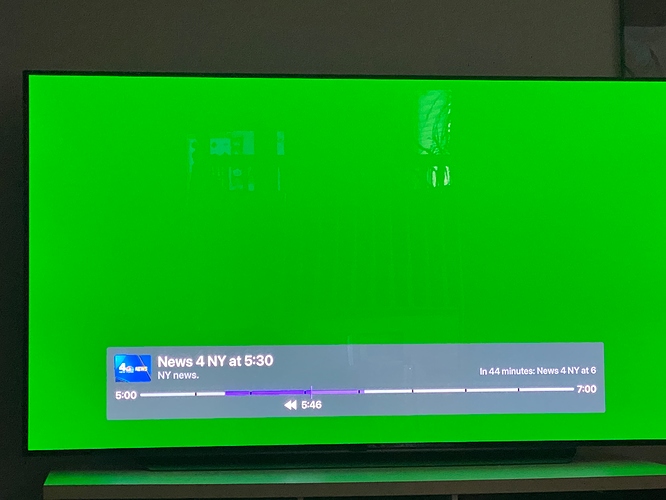 Now I’m getting tuner not available when there are tuners available. Diagnostics submitted again. Had to kill the app to get it working again.

Can you try switching back to the Default video driver?

Sure thing, but I have to step out. I’ll try later.

it works fine on the default video driver, i cant replicate it. i can easily replicate it using the experimental. thanks.

Thanks. What about with experimental video driver but Linear deinterlacer

these setting work, i cant replicate the issue. thanks.

An update to my very slow/jumpy rewind/fast forward issue of live recordings on ATV 4K - I switched the video driver back to the default (from experimental) two days ago when I saw the advice above and the performance improved immensely. I had actually forgot I had made that change long ago.

What do you have Deinterlacing set to?

The Deinterlacing was set to Linear (60fps). I hadn't even noticed an experimental mode under that menu until I just looked.

I experienced an Apple TV playback issue this weekend. One time watching OTA and a second time watching a TVE program. In both cases I was fine watching the program live from the buffer. Problems started when I paused and then attempted to jump forward to fast forward thru commercials. In both cases the interface response became flaky before it ended up completely unresponsive. Let me define flaky... after I attempted to jump forward 30 seconds the show did not start playing, pause and restart did nothing, fast forward again did nothing. I was able to restart once by scrubbing forward and then jumping forward 30 seconds. The next time I tried to jump forward through a commercial block the UI completely locked up. I was not able to get the channels app to unlock without exiting the live buffer.

This was on a AppleTv 4k, running TVoS 14.0.1, using the latest Channels Beta and the latest general release DVR. I'll have to check to see what video driver and deinterlacing mode I am using as I am not home.

I'm also experiencing the same issue on my Apple TV 4. Honestly I've experienced the slow buffering since day one and just assumed that was normal so I was shocked when I tested the app on my AT&T TV box which runs on Android TV and the scrubbing was instant. Not sure why it has to buffer but it does everytime I fast forward or rewind. I have AT&T fiber that is gigabit. I'm using a MOCA adapter to feed a switch which feeds my bedrooms. Both are gigabit capable, I get full speeds on my computer. Running the speedtest that's recommended in this community gets me a result of 112mbps and 20ms latency on my Apple TV. Any ideas or updates on what the issue could be? The Apple tv is running the latest TVOS

I too am experiencing the same scrubbing issue. While watching an in-flight recording the speed of fast forwarding by pausing, using touchpad to scrub then stopping was very slow. I too remember when it used to be very fast.

Did some additional testing last night and found that pause, rewind, fast forward and scrubbing on the AppleTv perform better on recorded vs live content. At a high level that doesn't make sense as locally stored data should respond much better then DVR'd content that introduces complications such as network latency and DVR server performance into the equation.

I just uninstalled the app on my Apple TV and also uninstalled it from my computer. I reinstalled both and set everything up via the database backup. It was a simple process and that seemed to have solved my problem. Scrubbing is instant in the Apple TV Now in addition to being instant on the Android TV box. I'll see how long this lasts but I see this worked for someone else in this thread so that's why I decided to try it.