I am dealing with a lot of metadata issues related to Movies and TV Shows.

(1) Recently added Stream Link movies are not showing up with images. Here, you can see this happening on TS4K+ (was not happening on CCWGTV, but more on that later) for programs that have been added over the past several days. One is showing up, but the others are not. As noted, for some of these it has been several days so it is not a matter of time. TV shows don't seem to ever have this happen, only Movies: 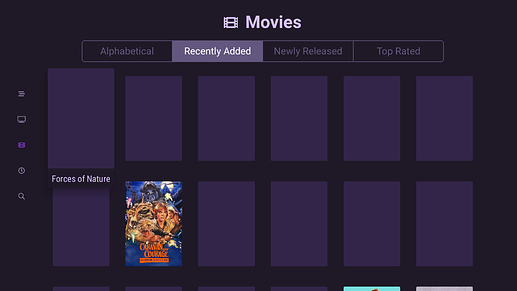 (2) The app restarted and now I have almost no metadata at all on the CCWGTV, no matter the source. Movies show nothing. TV shows all of the programs, but generally all episodes are missing. Some have one episode showing, but again it does not matter if they are recorded, local content, Stream Link, etc...: 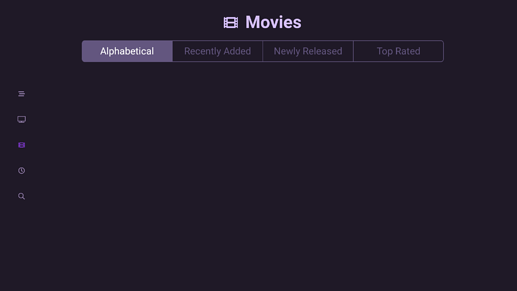 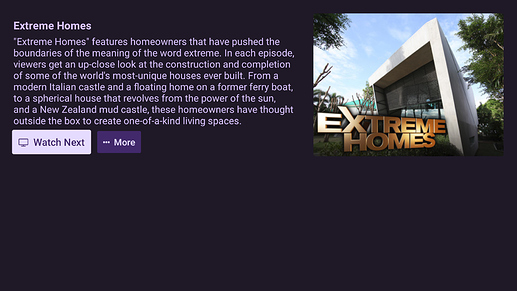 (3) Episodes have have titles and details show up fine in the web. However, on the sticks they are missing titles and descriptions. This is not consistent in any way as plenty of programs do have this metadata. Here is an example of where it is not working: 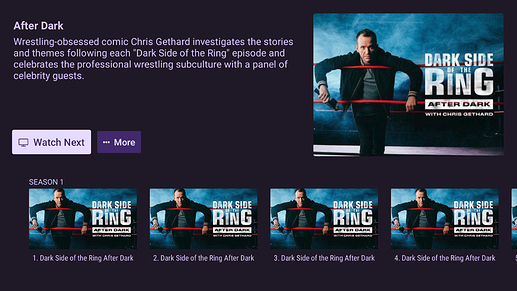 (4) For some reason since the last update, the TV shows will randomly re-order to "Recently Added" instead of staying "Alphabetical". Here you can see that "Alphabetical" is selected but the programs are in another order entirely. The only way to fix this is to select change the order and then go back to "Alphabetical": 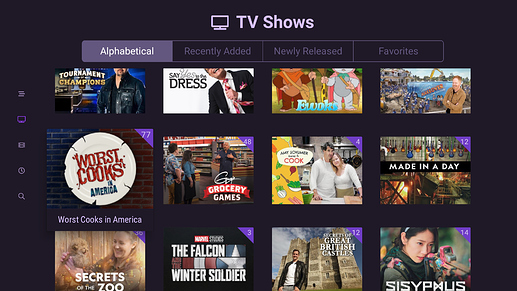 Just to throw a bit more: I did a force stop on the TS4K+ and started back up (FYI, every time I've done a forced stop, Channels Button Detector turns to "Off" and I have to put it back on). When I did so, it became just like the CCWGTV. I then added a new Movie and a new TV show. The new Movie showed up but without art or other details. The new TV show also showed up, but had all the episodes. I even removed episodes and ran a purge and those updated.

It's like new TV is fine, new Movies are only mildly messed up, and everything that was already there is inaccessible, unless it was a Favorite TV show, in which case I get one episode.

FYI, every time I've done a forced stop, Channels Button Detector turns to "Off" and I have to put it back on

I believe this is a limitation of Android. Since you are force closing the app, all parts of the app—including the Button Detector—are shut down.

And I'm not done yet. I have another 65 shows left to add plus whatever comes out week-to-week that might meet someone in the house's fancy. How can we increase or eliminate the timeout?

I'll increase the timeout and push up a new beta. But it may still cause issues because we have not tested or optimized with such large libraries.

New apk beta is out to try

Installed and up and running. So far, it looks exactly the same (no Movies, all the TV shows but no episodes). Letting it sit for a bit to see if it indexes.

No dice so far.

Can you submit diagnostics, or check x.x.x.x:57000/log to see the client log (using IP of your android device)

So... as a temporary workaround, I'm keeping my total number of Stream Links + Personal Media + Recordings to under 10,000 by moving stuff into non-read directories off to the side. I'm not sure what the absolute limit is (maybe ~12,000?), but I want a large buffer space because usability is more important in the short term.

That said, I'm still looking for a real solution to this because managing things in multiple places is the antithesis of my goals with Channels.

We've begun work on optimizing things for larger libraries but its something that is going to take a while.