I have Verizon FIOS, ATV4k and HDHR prime - (wired Ethernet and sound is via ARC).

So when ATV is in 5.1, I get great lip sync with iTunes movies, Netflix and Hulu. With Channels, the lip sync is all over the place… some channels are right on (CNN, PBS) most are off, some by quite a bit - mostly video ahead of audio.

In stereo, all channels look good.

FWIW, insta tv seems dead on with audio in 5.1, although the video is unwatchable🙄

I’d rather not have to switch between 5.1 and stereo to use the channels app. Similar, I don’t want to be playing with audio delay when using different apps. I don’t really care about 5.1 on fios, but I like it for all other apps (Netflix etc), so I don’t MIND that it’s stereo.

I’ve obviously seen that other people have reported similar issues. If this is a pervasive issue, could you guys do something like an “auto stereo” option?

Have you tried switching your ATV between “Stereo Sound” and “Best Quality” to see if it makes any difference?

Usually these types of problems can be resolved by switching your TV into bitstream passthrough mode for ARC.

Hi and thanks for quick response. Tried “best available”, looks the same. My TV is an LG B7 - for sound output it offers pcm or auto (auto appears to be bitstream). Either way same deal, bad sync in 5.1.

Yeah, 2015 vizio sound bar. I tried it with optical cable as well. Didn’t see any difference so I went back with ARC for convenience.

Obvs Channels has a terrific interface and great picture. I guess I’ll have to pop atv to stereo when I want to use it unless you guys can think of anything else.

Let’s see if anyone else has ideas. I know a few other people are using the LG B7/C7

If nothing else works, then I guess we could add a “Surround Sound: Auto/Stereo” option to the app.

I’ve got the C7 TV, and also had audio delays using ARC. From everything I’ve read it’s just a problem with the ARC design itself. I fixed mine by upgrading my Receiver to one that supported 4K passthrough, so I could avoid using ARC.

I should add that within the TV menu there is a setting to adjust audio delay. You can play with that and see if it helps, but I was unable to get it exactly right.

Hi and thanks for sharing your experience with the C7.

I’m experiencing delay on the Channels App when in 5.1, but not with itunes movies, netflix, hulu or HBO Go. I DID try using optical instead of ARC, but things were no better. Probably not looking at new receiver anytime soon (wife), so that’s out for me…

Could you avoid arc and use optical?

Could you avoid arc and use optical?

Never mind me. Just losing my mind waiting around at the Genius Bar.

One other idea if you’re up to experiment for about $20. It’s an HDMI passthrough with optical out. One of the commenters in the reviews says it has no audio delay. I haven’t tried it myself, so I can’t say for sure if it will solve the problem, but it does say it will pass through 5.1 audio (Dobly, DTS, etc.) 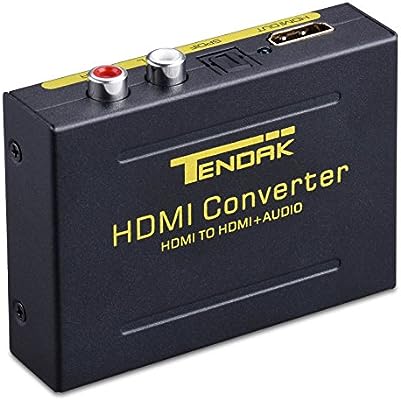 Tendak HDMI Audio Extractor not only to meet the ideal image of the HDTV but also to meet the need for an extract audio from HDMI source. It extracts the digital audio signal embedded in HDMI source a ...

I’m also having the issue with audio being out of sync. LG C7 here, with optical audio out to a receiver. I don’t have sync issues with any other apps on the AppleTV, just Channels with 5.1.

None of the settings on the LG’s settings seem to impact it.

If I switch the Apple TV to stereo only mode it does fix the issue…BUT…it’s a pain to have to switch audio output settings on the AppleTV every time I want to watch something on Channels.

Also, my experiance is the same as a previous poster - the audio lag only is in Channels. I don’t experiance it with the InstaTV app.

If the audio sync issue isn’t an easy fix, the in-app preference to switch it to stereo seems like a fair compromise.

@tmm1 - thoughts? I think the stereo mode preference would be an awesome addition. Is it possible to get in on a test flight beta of it?

So this item would go in between the Apple TV and TV, correct?

Video passes through to TV, audio is output to sounds bar?

I’m planning to pick up an LG this weekend to run some tests.

I have a Sonos Playbar attached to the TV via optical. Hopefully we can get to the bottom of this.

Re: the HDMI box - Took a look at it on Amazon, and don’t think it would be a good solution to this issue on the AppleTV4K. The box’s specs make it looks like it will only pass through 1080p video - not 4K HDR / Dolby Vision that the Apple TV can output.

It’s really odd that it’s only the channels app that I have audio sync issues with. Amazon/iTunes/Netflix/CBS All Access/ESPN, etc. don’t have issues.

Let me know how I can help!

All of those apps use the System video player, where we’ve created our own video player to play the MPEG2 TS streams that come from the HDHomeRun boxes. So there is definitely a big line between them and us.