OK, we're back! We've re-written the Siri Shortcut support from scratch and it's AMAZING now!

Along with these actions that you can run on your local iOS device:

You can now do them all on OTHER devices. Now you can create shortcuts that open a section, play a show, or play a channel on your Apple TV, or Android TV client.

Additionally, you don't need to manually enter channels or shows anymore, the app provides the data for you. Once you've opened the app at least once, all the data will be available in the Shortcut editor. It's way easier to make these now.

NOTE: if you're using one of the actions to do things on another device, make sure Channels is open on that device. The device choices are populated when the Channels app on iOS is running. If it doesn't see Channels on your other device, it can't add it to the options.

ANOTHER NOTE: Actions for Other Devices will only work if the Channels app is actually open and running. Channels on Android can be backgrounded (because Android) and these will work. On Apple TV the app has to be Open. Shortcuts has a "Open App on Apple TV" action to launch apps. If you're using an Apple TV, always use this action to launch Channels before your Channels actions in your shortcut. It also has the nice benefit of dismissing the screen saver if Channels is already open.

This is awesome to see. Can't wait to play around with this new functionality. Thanks for your continued commitment to excellence!

This looks wonderful. Could we have the option to display a Collection? I've been enjoying putting all the TV shows I watch (as opposed to other members of the family - we don't overlap much) in a Collection and it'd be great to go straight to my Collection with a tap.

OK this is amazing. I just set up a few new shortcuts, like one which turns on my TV, launches Channels, goes straight to a news channel, and opens the Remote app on my iPhone for easy access. It was so simple and intuitive. And now I'm playing around with voice commands to my Apple Watch and HomePod mini, which work to control Channels on this AppleTV too. Super cool! Thanks so much for this awesomeness.

and I think if you build your shortcuts accordingly, you should continue to be able to change channels handsfree, once the initial shortcut has channels running

These built-in shortcuts are way better than manually requesting from the client API. I used to have to include logic to check if my TV was already on, because if my Apple TV was completely off or the Channels app wasn't at least open in the background, I would have to wait a longer period before I could send the API request.

Now, I don't have to use any "Wait" commands in the shortcut and it just works. My TV can be off and Apple TV in sleep mode and the shortcut will run smoothly. Thank you devs!

Also: I'd love to hear what other users have set their Siri commands/phrases to since the most natural ones are taken by Apple's default commands. I had to set the toggle captions shortcut to "Hey Siri, Channels Captions" because a more natural reference to turn on captions will result in Siri trying to toggle captions at a system level, which doesn't work.

the most natural ones are taken by Apple's default commands

Yeah. I had an issue with "turn on the today show". Siri asked which audio app I wanted to play the music in

I don't' understand why it's so hard for these voice assistant vendors to just look at OUR HARD CODED PHRASES and prioritize them, it's absurd.

I tried this out this morning, and am impressed. I was able to press a single button on my phone when I got up this morning, and by the time I got downstairs my TV was already on and tuned to the morning news. Thanks, guys!

Also: I'd love to hear what other users have set their Siri commands/phrases to since the most natural ones are taken by Apple's default commands. I had to set the toggle captions shortcut to "Hey Siri, Channels Captions" because a more natural reference to turn on captions will result in Siri trying to toggle captions at a system level, which doesn't work.

I have two AppleTVs running Channels, so the voice command for CC toggle that seems to be working best for me right now, at least in the bedroom, is "Hey Siri, captions in bedroom." I'm sure one day Siri will be location aware. In the meantime, this should do just fine. Any other suggestions for dealing with multiple TVs/rooms? And thanks for the inspiration!

That simple change would make everything better. I have most of my channel tuning commands set to the channel name only, like "Hey Siri, ESPN". A bit unnatural but it's short and seems to work for now.

Any other suggestions for dealing with multiple TVs/rooms?

In the latest TestFlight beta, the "On Other Device" shortcuts will now prompt you, if you leave the Other Device field blank.

So if you want to make a shortcut that will work on arbitrary devices, and you don't mind being interrupted to choose, you can do this.

Could we have the option to display a Collection?

The latest build on TestFlight now has an action for showing a Library Collection. You even have the option to shuffle playback of this collection.

The actions work locally on device and on Other Device.

I’m loving this new functionality, it opens up so many possibilities. I’m curious about these toggles though, are they even usable yet?

Yeah I think it's Monterey stuff. The Shortcuts app is in pretty much shambles right now as they port it to Catalyst and get it on the Mac. There have been a lot of complaints. 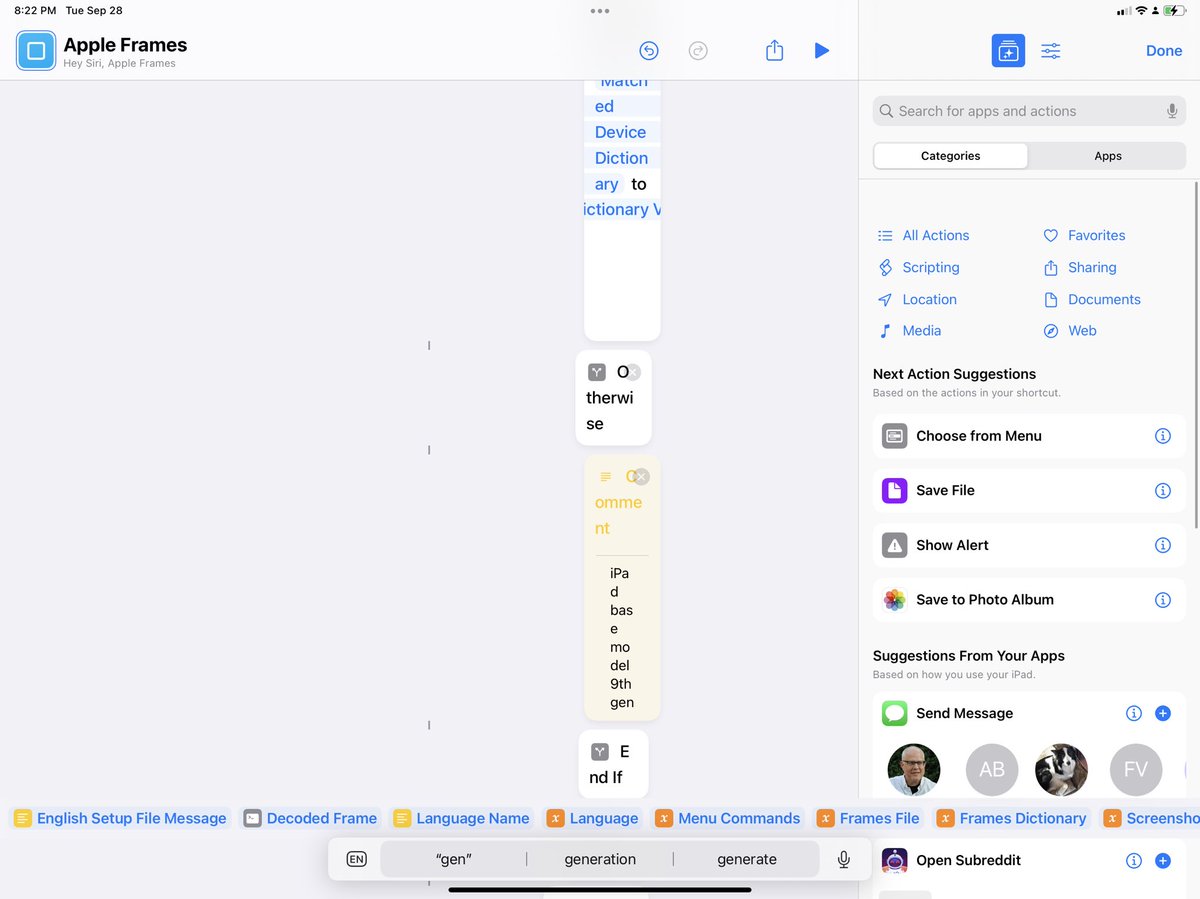 I know you added some collection support with shuffle options, etc. Another suggestion for collections would be to add shortcut support for a drop down menu. It’s usually a check box when building shortcuts with lists of items. Perhaps some people could find this option more flexible in their use cases.

Also, it would be really slick to include support for our “channels collections”.

Since it seems like there is now the ability to query the server and channels running on another device, for recordings and such. How about querying for all the custom channel collections? If you could include an optional drop down option for that set of shortcuts, I could see with one shortcut being able choose from all your favorite sports channels, another for opening all your xyz channels, etc.

I wish this all existed a bunch of months ago before I implemented everything manual through the API, so I’m thinking of ways to make this useable for other people going forward.

Collections support is already in there, though there's no way to query for them that I could see from the Shortcuts interface (imagine there is with the API though?)

What are you after?

To be clear I'm happy with the current functionality you added today! It addresses my use case perfectly. As you can see from my screenshot we only have a couple collections right now so building a separate shortcut for each collection works fine.

I was trying to answer @mnwxman132 who I think wants "query" functionality so they can for example let Shortcuts display a menu of collections and let the user pick between them interactively.

I can do the same thing to the Collections field as I did to the Other Devices so that if you don't choose anything, you will be prompted. Doesn't seem like any reason not to. I'll get this stuff in there.