i did notice that ffmpeg was hogging cpu, and the imports for the hierarchical folders were taking incredibly long

What platform is your DVR server running on? I also noticed that after I swapped out a dying PC for a Pi4 that my imports were taking a very very long time ... ~5 mins for every hour of an imported item. Further, the fan would spin up as CPU temps exceeded 80°C.

That was an excellent question and here is what i found. I had handbraked these videos from an old dvd on my mac mini and all the file extension were .mp4.

Then as usual, i assigned these to my plex library before pointing the files to channels with the import local media.

After importing these into channels, i noticed a flaky issue with plex no longer using my file names (i use the plex folder view for the music videos) and assigning the album title to every song instead of the individual song titles. Plex has never done this before, and im not sure whether channels updated the metadata upon import or this is a plex issue.

However, regardless , thats when I noticed that the files extensions were mp4, and usually i handbrake them to m4v files for compatibility with the apple ecosystem and spatial audio. These are all surround sound titles and iphones need to see things in m4v to recognize the 5.1 surround format

So i rehandbraked them with the same video and audio settings but with m4v extension, and then brought them into plex before pointing them to channels. Sure enough, these imported into channels very fast

Ive still got weird plex issues with how it is displaying the individual song titles all using the album title for every song.. I will play some more with that, as it may be a plex library issue and not a channels issue. But it seems mp4 files import very slowly compared to m4v files with similar compression settings.

Blockquote
Can you capture the full ffmpeg command running and using CPU, with all the arguments

im happy to do this. I can do it for one of my mp4 vs m4v files if it helps. However ffmpeg seems to be involked when channels is doing the import. Where can i find the ffmpeg command that was involked by channels with the arguments. I looked in the log file and all i see is message saying imported “such and such”. No ffmpeg info.

I can do this sometime tomorrow if it is helpful. Just need a pointer where to gather the info.

You could see it in Terminal.app via ps aux | grep ffmpeg

Based on your details though, I believe its probably taking a long time to generate preview thumbnails for mp4 due to a bug that will be fixed in the next prerelease build.

And i think the title issue in plex was coming from handbrake not using the file name as the title in the metadata. and nothing to do with channels changing the metadata.

Can you capture the full ffmpeg command running and using CPU, with all the arguments

Pretty sweet! Love the work you guys continue to do!

I"m not sure if this falls under this category or not but it's something I've been curious about for a long time. Is there any way to add a simple internet url to an mp4 file and have it play within Channels rather than have to store the file locally?

I watch some weekly shows online that would be awesome to import into channels but don't necessarily want to have to eat up space by downloading the files locally when they are already hosted somewhere else. Your comment about "internet videos" reminded me of that type of thing.

That sounds a lot like what my podcatcher app does.
You can stream or download using a url.

Is there any way to add a simple internet url to an mp4 file and have it play within Channels rather than have to store the file locally?

That sounds like an internet playlist, which is not supported, nor is planned to be.

If the host of the content is part of a larger ecosystem that supports stream links, then that is something that might be integrated.

Videos support is now available in the Android beta.

It looks like Betas are not propigating to Play Store again. This is the current version:

The app is in review by Google. You can use Settings > Support > Install Beta instead

Could we have an option to sort videos by name in both the client and the server?

Also, an option to have customer artwork for the section? Currently, it shows the Channels logo.

Also, an option to have customer artwork for the section? Currently, it shows the Channels logo.

You can update the art for video groups just like everything else.

Some big quality of life updates for Videos.

So if you set your group as Music Video, all the subsequent imports will be set to that as well. This should hopefully make things a little nicer and less work for managing Videos.

The app is in review by Google.

The new Videos section and metadata and art editing features have all shipped. Thanks for the help on this! Please report any other issues to a new topic. 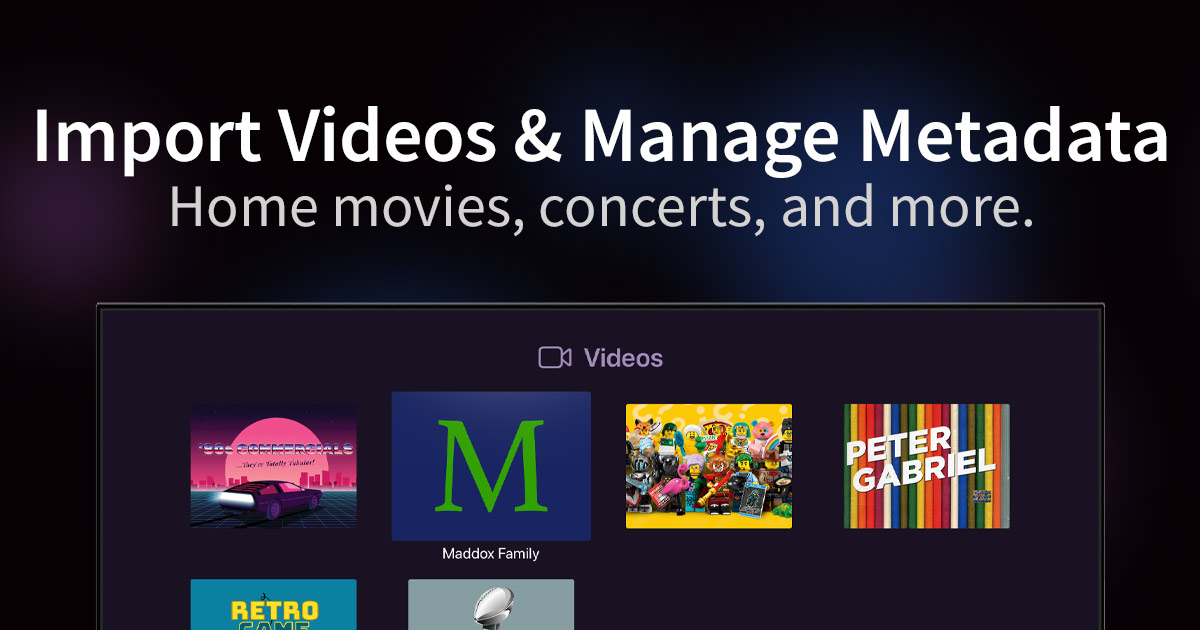 Add home videos, concerts, and other videos to your Channels library.