Can Android survive this?

I have no problems at all using the FireTVCube. Tried the AppleTV send it back within 1 day.

Other than their 18 month period where H.264/AVC interlaced content could not be decoded with their HW decoder, and broke viewing for most all EU viewers. Or their horrible home screen that shoves ads down your throat every moment.

It's fine that you're happy/comfortable with what you use, but don't malign those UX/platforms that you don't use/understand, simply because you're ignorant.

What the hell is wrong with you always calling people names like ignorant you think you are so high and mighty I am sick and tired of your attitude. Discuss the product do not make assumptions about peoples intelligence. Nothing wrong with having different opinions but your constant put downs of people is quite stupid.

Discuss the product do not make assumptions about peoples intelligence

My comment referenced Amazon's broken HW decoder that caused issues for EU customers for over a year, across numerous updates. It also referenced Amazon's ad-laden home screen, which has shown no bit of changing, and is objectively more ad-laden and intrusive than the Google TV home screen change that this whole thread was about.

I fail to see what those statements have to do about comments referring to ignorance or intelligence. I think you are taking broad general statements of fact as personal attacks, which is clearly not the case. If you feel attacked, I'm sorry, but that was not the intention.

Let's keep the discussion on topic and fact-based.

It will be a cold day in hell before I buy anything from Apple. I'm sure their hardware is fine but everything else about them rubs me raw.

The day I cut the cord, about 6 years ago now, I realized that the one thing I missed was recommendations/curated content. I'm lazy. I depend on friends or AI like this to help me find stuff to watch. Only complaint I have on the Chromecast is that it recommends from services I don't sub to.

Apple vs Android, windows vs Linux, ford vs Chevy, my dad vs your dad, blah blah blah... I'm not big on the ads, so I use apps only mode, and I'm not an apple fan so I don't use their stuff. We do have an ipad laying around that was gifted to us. Just had to break past the this ipad is locked crap. And at&t is sending me a free iphone SE 2020, just had to pay taxes, I figured why not. But I'll stick why my Androids, use the apple stuff when it's necessary. I mean, it's not it'll be like this forever, there will be more Chromecasts and more android versions, and probably more ads, and more stuff to complain about.

We need to get back to rooting everything again, I was very disappointed in the lack of development when I got into Android tv. If I don't like the way the stock os performs on my phone, I just load up another one, and tweak it to my liking. There's none of that with the Android tvs, but it's totally feasible. I know that the shield wasn't messed with much because it broke widevine and that's needed for 4k Netflix, but again, where there's a will, there's a way, root status can be hidden.

So... I'm hoping the Google tv stuff will up the ante with the development community, and open up some real possibilities for customization.

If you are worried about being able to upgrade, I guess you should not.

I suppose the good Channels people will make whatever changes needed as well.

Why would anyone jump through all those hoops?

I wouldn't jump through all those hoops.

Personally, I will just wait and see, I'm quite indifferent, at least until I see the upgrade. Those that really want the upgrade can follow the link and start jumping.

Maybe the reason why nvidia shield is discounted now

Good client app for IPTV services on Android devices is tiviMate. I wanted to code equivalent for Apple TV but I cannot for god knows how long because Apple messed my developer certificates

Technically if you have such app the only hack necessary would be to launch your app immediately after device OS launch, therefore omitting the ads.

If not the only other solution would be to put Raspberry Pi before your device as a router configured to block network traffic containing ads. People do this for smart tv from Samsung often

Yes. Airplay support for Sonos is a bloody mess, I tried to turn on experimental audio driver but when I want to use PIP it blocks the sound and back to normal watching makes video stuttering too,
It is not Apple fault because ESPN app can handle multi view Picture in Picture without problems.

I resubscribed for Euro2020 but after that I won’t subscribe again until this is fixed.

@AtoZ0to9 If you don’t need your iPhone or iPad organise a giveaway on internet. Many people would like to use iPhone or iPad but cannot afford it especially during pandemic. It always amaze me how people obtaining superior hardware decide not to use it.
I wouldn’t complain if someone had given me iPad for music production .

LOL I sent the AppleTV back for a refund No apple products here at all overpriced.... But if I had not sent it back I would have considered donating the AppleTV to you.

I have no problems at all using the FireTVCube.

We tried Fire TVs. They were ok. Certainly better than the MiBox Android TV devices we tried.

Tried the AppleTV send it back within 1 day.

To each their own. Within a week of having our first ATV I knew all our Android and Fire TV devices would be replaced with them. And they have been. A much better user experience in my opinion. Never mind the privacy issues.

What the hell is wrong with you always calling people names like ignorant you think you are so high and mighty I am sick and tired of your attitude.

What are you on about? All he did was address your points. He offered no offense that I could see. (Unless you regard disagreement as offensive, I guess.)

We need to get back to rooting everything again, ...

I was very disappointed in the lack of development when I got into Android tv.

With that I can agree, which is why we moved, first to Fire TV, then to Apple TV.

It will be a cold day in hell before I buy anything from Apple.

See: I feel the same way about Google and, to a lesser degree, Amazon. So there ya go

I'm sure their hardware is fine ...

Other than some of its somewhat restrictive conditions, their software is pretty darn good, too, IMO. And, unlike Google and Amazon, they have clearly-stated, ironclad privacy guarantees.

I think some of y'all could slow your roll a bit. Stop taking somebody else's decision to go a different way as an implied indictment of the way you've chosen to go. I drive a Jeep. I don't take offense when I see others on the road driving other SUVs

just got this on my shield. no prompt, no update, no nothing, it just changed. 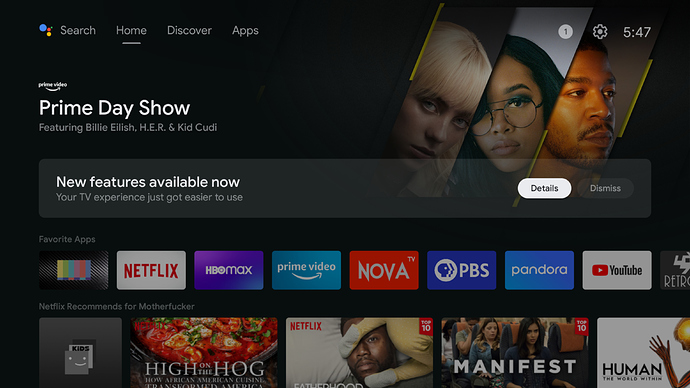 Also random update. I figured I'd make my own "android tv" so i tried it on my old laptop. It booted. But i can only get mobile version of Netflix. So making my own android box is a no go.

I'm not seeing any ads, just recommendations based on the services I selected. It's much nicer than the Chromecast, but I need to use that again to see how much nicer.

My 2019 Shield Pro just updated to this spam ad filled shit....AS I WAS USING IT.

I have auto update and os update OFF.

So this is not an app update that triggered it.
Unlike the Tivo stream dongle i have that Google TV like home launcher, that i just reverted to old version and never update the Android TV home.
Do not see a way to disable it or use a "App Only" mode.

I guess i might pick up a Apple TV after all....pretty sure their ui is not so content aggregate spam. 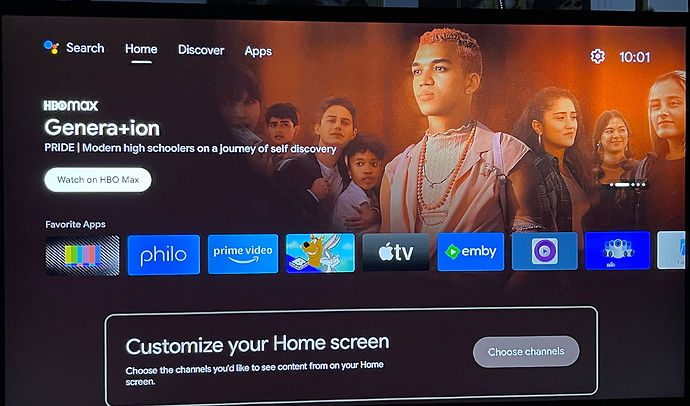 Got it last night. Looked it over today. I think I can survive this change.

I do like that you can completely get rid of "play next".