Here is an example of my signal strength: 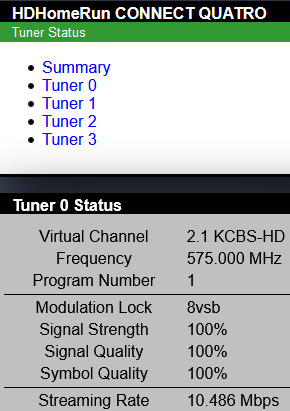 I get pauses and stuttering in my live TV viewing. It also seems like whenever the channel I'm watching fills the chromecast buffer, it pauses, jumps to the beginning of the buffer then back to live. This also sometimes results is severe audio sync issues.
I've tried switching the playback advanced setting from hardware to software... doesn't seem to make a difference. I've tried disabling the Surround Sound setting and that completely kills TV, so I need to keep this set to ON.

Sounds like a lot of issues, I know LOL. Just trying to get this to work smoothly, because I don't want to go back to Tivo.

Can you submit diagnostics from the app after it happens. It does sound related to the buffer filing up, esp if you're seeing content flash back to the earlier stuff.

Will continue to do this going forward. I did go through that process while running into issues the past couple days, so some of that diagnostic info should be queued up. Thanks!

So using the Software decoder settings turns out to be much more stable on the Chromecast GoogleTV in my use case now. It's like any minor fluctuation in TV signal locks up the Channels app when Hardware decoder is in use. My only slight complaints with the software decoder are it is slow to output audio after commercial skips... and it doesn't show the commercial skip button onscreen 50% of the time.

Bumping my previous post, as the issue of video/audio performance has been steadily in decline...

This problem oddly is actually worse on previously recorded content. Video appears to be dropping many frames and there is a great amount of video stuttering.
I purposely got HDHomerun because of the 5.1 audio support of broadcast HDTV (and this is supported by my home theater hardware), but with this enabled on Channels app, audio is half a second to a full second out of sync. This happens with recordings and LiveTV.
I have submitted diagnostics from the app.

I added an additional 32GB of storage, just in case the limited space of the Chromecast was a contributing factor. Same issues are all present, including pausing/resuming of live TV when the buffer fills.
Added FYI, 5.1 digital audio works with HDHomerun's app on the same Chromecast.
I don't have these issues with the Android Channel's app on my Samsung Galaxy S10e phone.
Appreciate the help or tips any may have.

Do you have the app set to original quality? Are you using the default drivers for audio and video?

Yes, in home quality set to Original. I was not aware Chromecast had configurable drivers.

I was able to reproduce this on my CCGTV with surround sound, and see the same thing as in your diagnostics.

Uploading a beta now with a fix.

Thanks, you guys are awesome. Can't wait to test it out

This issue is still present with the Chromcast w/ Google TV.

Unless surround sound is disabled, the audio is out of sync.