I’ve been using Channels with the Chromecast with Google TV. While the performance has been decent, I have noticed occasional buffering and have found fast-forward and rewind to be a tad sluggish at times, even on Ethernet.

Anyway, I recently discovered one way to significantly improve performance - use a third-party Ethernet adapter. The Google Ethernet adapter is limited to 100MBps, and while that is usually fine for streaming, using rewind and fast forward on video recorded OTA without additional compression can benefit from more speed. I bought a Cable Matters USB-C Ethernet adapter designed for the Chromecast, and now rewind/fast-forward is less sluggish and my speed test shows 350MBps (you don’t get the full gigabit due to the limits of the USB port). Fast-forward and rewind still seem to work better on the Apple TV, but I think that’s a difference in UI rather than performance at this point,

One note - if you go this way, you want to make sure the Chromecast and DVR server are connected by Ethernet to the same router/hub, and make sure neither are connecting to Wi-FI. When I first tried I only got 80MBps, but discovered my Chromecast was connecting to the IP assigned to my DVR computer’s Wi-Fi interface. Also, if you get a more complex USB-C hub rather than just an Ethernet adapter with USB-C power passthrough, you may need another power adapter to supply enough power.

Thanks for the info. So being connected to the same network is not enough?

This just goes to show that a low-latency wired connection is better than a noisy and shared wireless one.

Back on the TiVO Community boards when the TS4K+ came out, a lot of people batted around their favorite adapters for this type of thing and other use cases. I have not tried it myself, but this guy came out the winner:

I believe it should work the same for CCWGTV.

Would you mind providing a link to the exact one you purchased? 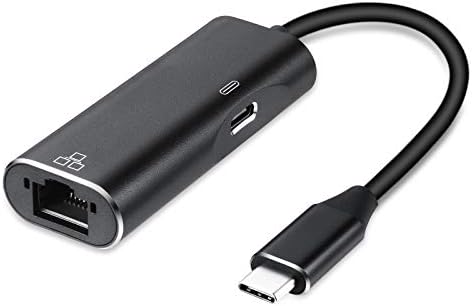 Reading the specs, there is no mention of USB-C Power Delivery (PD) support, only power pass through.

The Cable Matters model posted above yours is both less expensive and supports PD. Were I looking solely for an Ethernet adapter for the CCGTV, I know which I'd choose.

I’m not sure USB PD is really important unless you’re using a hub - I chose the Cable Matters one because it was known to support the standard Google power adapter (which is not USB-C PD) and work at speeds above 100MBps. It sounds like the Wasserstein one is the same, though the Cable Matters does cost less. I would have purchased a hub, but I don’t have a huge need for USB at the moment and all the hubs I saw seemed to either need a bigger power supply (an additional expense), have iffy reviews, and/or only do Ethernet at 100MBps.

It is an inline adapter to pass through the power and give Ethernet support for it. Works fine. If u want to use a hub to add storage than some other adapter may be needed. But to add just Ethernet to it works great

I have a managed switch and have my Google TV connected to the same VLAN as the NAS running the Channels server, Ethernet. The buffering and stuttering has been a pain for me for a while now but after buying that GB adaptor it has resolved the issues I was seeing. Many thanks for the info, very much appreciated.

Think I could somehow rig up a hub and continue using the Google adapter? My thought process is that I've already bought the Google adapter, and also that if the Chromecasts USB port has limitations, I should plan for that, and not try to make the internet as fast as possible, keep it capped at 100mbps and whatever storage I add can use the rest.

thully, may I ask what kind of speed/latency you were getting with your Chromecast via wifi? I went from the Nvidia Shield Pro connected through Ethernet to the new CC over wireless and have noticed fast-forward to be a tad less smooth than the Shield setup but still much faster than what I experienced on my Sony Android TV connected via ethernet. I'm getting about 300 Mbps via wireless on the CC and think the difference is the better process in the Shield compared to my Sony.

I was getting 24MBps or so - don’t remember the latency. Fast-forward was faster, but I had intermittent wi-fi issues that led me to get an Ethernet adapter