Display shows airing their pilot episode in On Later

Currently, unless it's a New Season Premiere on a channel, there doesn't appear to be a way to view all upcoming pilot episodes. I'm not looking for New shows, but every series that's airing the pilot episode no matter which OAD.

If you create a paused advanced pass like this, it doesn't find them all.
Categories == Series
EpisodeNumber == 1
SeasonNumber == 1

Adding a channel number gets more hits, but still doesn't find them all (don't want to create a pass for every channel).
Channel == 1424

Or is there another way to do this in Channels DVR?

If you create a paused advanced pass like this, it doesn't find them all.
Categories == Series
EpisodeNumber == 1
SeasonNumber == 1

Which ones are missing,

Right now all but these 5. 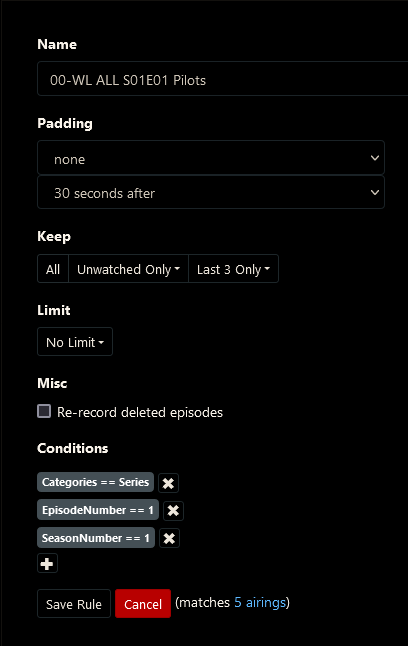 Adding a channel to the pass gets more results 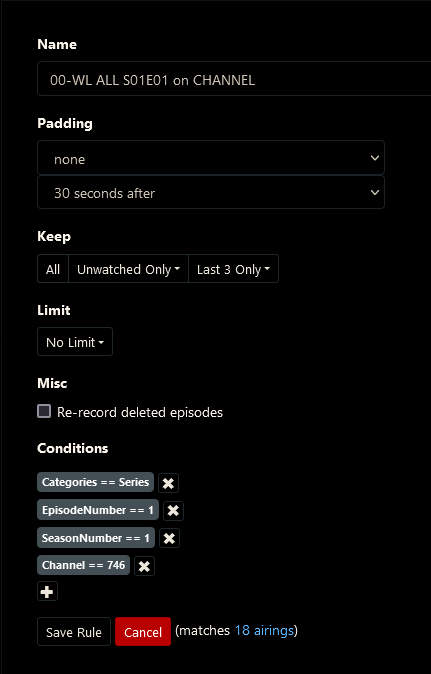 Adding an OAD decade to the pass gets more results 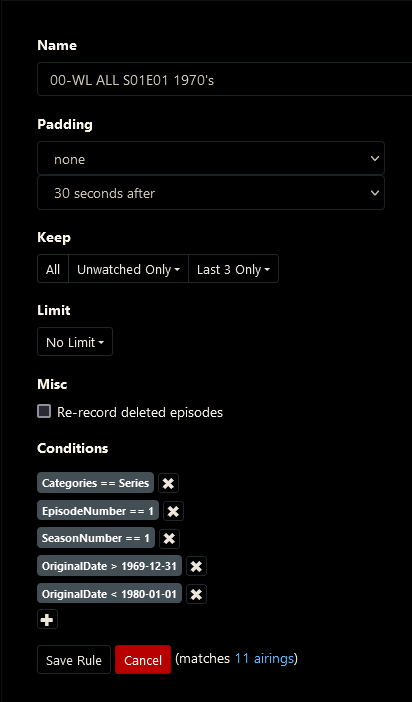 Gotcha. Fixed in next build.

Is it working now?

Display shows airing their pilot episode in On Later

Don't know. I'm unable to find them in On Later.
Looked in Series Premiers and those are still just the new ones.
Looked in TV Shows and only see genres, don't see anything labeled Pilots.

And if I create an advanced pass like below, it only shows 31 (TVE) / 33 (HDHR) airings for the next 18 hours.
Categories == Series
EpisodeNumber == 1
SeasonNumber == 1
And again, adding a Channel or OAD decade shows additional airings the above pass doesn't.

@tmm1 I unchecked your reply as a solution.

Although your fixes increased the number of hits in an advanced pass (Thanks!), it isn't a solution to my Feature Request to see Shows with Pilot episodes airing in On Later.

Currently I would have to use an advanced pass to check for them, which includes duplicate airings.

I'd prefer to see a section in On Later called whatever you want that only shows upcoming Pilots, whether or not they're NEW and considered Series Premiers airing for the first time on a channel or not.

I'd prefer to see a section in On Later called whatever you want that only shows upcoming Pilots, whether or not they're NEW and considered Series Premiers airing for the first time on a channel or not.

This is a very narrow and niche situation. Do you feel there enough other users who feel this very specific situation is needed to warrant the man hours to implement it?

Although my post wasn't directed to you, feel free as a Feature Request killer to mark it as Solved.

If that's the way Feature Requests are going to be treated on this Forum, I will not request anymore since it seems to annoy people like you when users make requests that don't agree with your view.

I think you have a very narrow view that doesn't coincide with my view, so will agree to disagree with you.
After all, we're both paying users of the same software, but I do respect other users opinions, unlike you,

Thanks for the suggestion but it is a bit specific for On Later.

We’ll keep it in mind if we think of some other things like this that could be grouped together in some fashion.

My goal wasn't to kill your request, but rather to point out how narrow and limited this specific ask is.

However, instead of thinking so narrowly, why not widen the scope to a more generic set of use cases. Your original post about the rules for advanced passes led to some refinement and fixes in that part of the DVR. Why not use the logic from the advanced passes to extend the On Later page.

Instead of allowing refinement only by genre, what about allowing for arbitrary user-defined sections in the On Later page, using the logic that drives Channel Collections and advanced Passes together.