If you use an internet source (TVE, Pluto TV, etc.) how much has your internet consumption increased?

I will start. Can you guess when I signed up with Channels DVR? 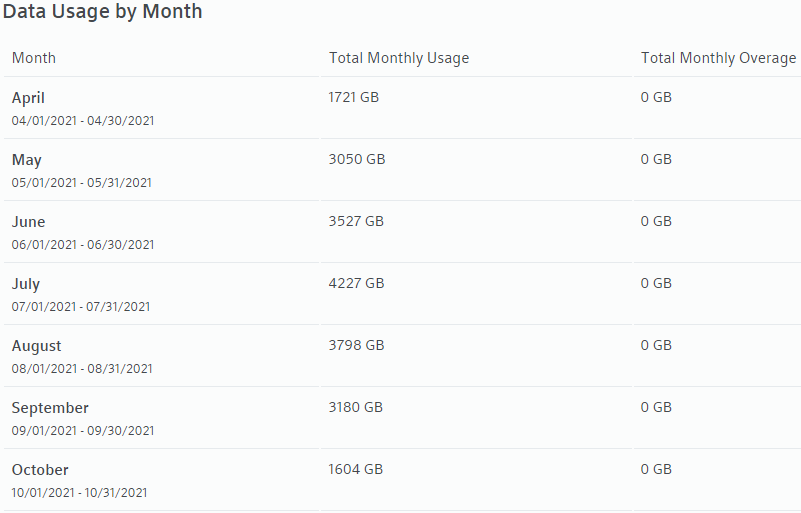 I'm taking advantage of no data cap for now until next year.

Wow. I thought we were chugging through the data at 2.5TB. You’ve got us beat.

I use TVE, Pluto, Stirr and SamsungTV. I record a lot but have not come close to that data usage. Does it seem correct to you based on your DVR usage? If not, you may have something else going on within your network.

I have to check my scheduling to make sure all my TVE shows don't record at same time. It kills my internet. Thank God for hdhr+antenna. It saves me a lot in data.

I have no way to track my data usage via ISP account page, as my ISP does not track usage at all as there is no cap.

But i guess how much data TVE use would use is very subjective to your own use case and channels you stream, as some are 720 and other 1080. How many recordings you do and how often you watch just live etc.

Either way, goes with out saying, if you have a capped internet service, then streaming TV channels, or any media for that matter, alot is not good idea. (which, in todays world, never made any sense to have data caps for home internet, since almost everything is online streaming service these days, but certain monopoly ISP's still treat customers like its the early 2000's when it comes to data usage.)

I am new to the TVE side of things. However had netflix, prime, and few other streaming items for a while. We would hover around 780 to 950 even when remoting into work working from home every other day. After the fact I knew I would need to go with an unlimited plan through comcast as they give you like 1229 gb due to the datacap and like $10 per 50 gb if you go over up to $100. That was my motivation to just add their unlimited plan. Currently at 561 gb for the month divided by 13 days = 43.15 * 31 days = 1337 gb. So I would always be over my cap just by adding TVE. Comcast really needs to evaluate their data cap as it is way to low.

meanwhile, I am lucky to live in a area that has multiple ISP options.
Local private owned one, US Internet is the best, but only services a small strip of of about 5 miles. and half the cost of others for 1gig fiber.

No cap means i can make use of unlimited back up services, like BackBlaze...about 25TB in one month when i first signed up and uploaded my backups. take that Comcast. lol.

Does it seem correct to you based on your DVR usage?

Yes, it does. I went overboard in the beginning with my DVR recording almost 24/7 for a while. Now I have the whole series of Knight Rider, Magnum, P.I., and other classic series. All for only $8/month, not bad.

Thank God for hdhr+antenna. It saves me a lot in data.

You are lucky. In my case, I live at the bottom of a valley and it is physically/geographically impossible for me to get OTA. I had cable for a while but I was not pleased with the picture quality. I've had DirecTV for 20 years now and I'm using these credentials for TVE in Channels. TVE is my primary source in Channels. Recently, I also added Frndly TV for Channels, as well as Pluto TV, and Samsung TV+ but 99% of my recordings are from TVE.

Comcast really needs to evaluate their data cap as it is way to low.

I have Comcast too and, originally, it was planned for them start a data cap in my area (New England) this year. Somehow, a state official managed to push them back and it won't happen until next year. In the meantime, I'm taking advantage of it!

As much as we like to bash Comcast mostly for their awful customer service, I've got to say though that their internet has been pretty rock solid for me. My plan gives me 200 Mb/s down but only (sadly) 6 Mb/s up. Definitely not fiber but honestly 200 Mb/s down is actually sufficient for my family with 5 people constantly on the internet, including 3 of us working from home for 1.5 years now. Add to that using streaming services such as Netflix and Hulu and I'm quite impressed that we haven't any issues at all. I can't complain.

about 25TB in one month when i first signed up