iOS watch on tv or on device

Before the latest update I was able to use the app on my iPad to change the channel on my Apple TV. Now when I select a show from the guide it just plays on iPad. It used to ask if I wanted to watch on the iPad or Apple TV. Is this bug or did tvOS 14 or iOS 14 stop this? I really liked it, specially with my eyes are tired. Sometimes it’s hard to see the small lettering on the screen of the TV..

There is a setting in the app called Play To Your TV. Is it enabled on the Settings tab under Playback?

Yes I checked the regular app and the beta version both are checked but same out come.

In iOS 14 there is a new security feature where if the app wants to do anything on your network it has to be approved. Do you remember seeing that pop up the first time you launched channels after upgrading to iOS 14? If you declined it I would think it might break this feature.

To check this you can look in the app settings in Settings: 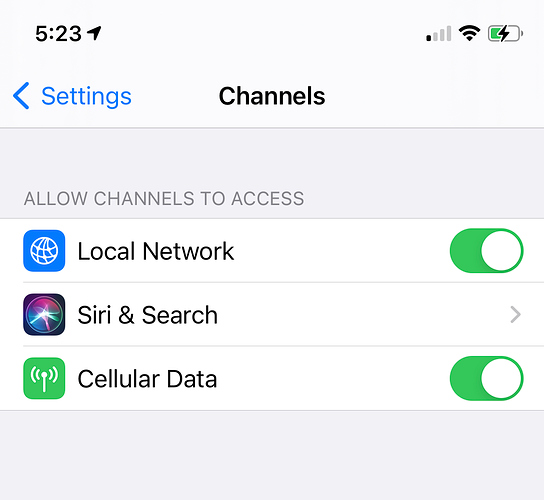 Well thank you, for the reply but I checked that and it is checked. So that’s not it.

I think it has something to do with tvOS. I beta tested the iOS 14 for a while as channels worked then. Just after updating the Apple TV has the started.

I didn’t even think to check but after upgrading to iOS 14\tvos 14 this has stopped working for me too. I used to always get prompted if channels was running on the Apple TV but not any more... Hmmmm

same here. confirm not working on iOS/tvOS 14.2 either

Thanks everyone, we'll check it out.

While the Apple TV app is active, does the Bonjour Browser (Discovery) app on your phone/tablet show entries for _channels_app with the IP of your ATV4?

I am running iOS 14 and tvOS 14 and I experienced this issue, but then I was able to resolve it.

In my case it was because I was running the Channels beta on my AppleTV, but the regular release on my iPhone. Once I updated to the Channels beta on my iPhone as well, I was able to see the options for watching recordings on device or on either of my AppleTV's. FWIW, the Channels app does need to be running first for the AppleTV it's on to be presented as a choice. I know iOS shortcuts can launch AppleTV apps, it would be great if the iOS app could integrate that control for precisely this purpose.

I have both regular app and the beta on both Apple TV / iPad. I have tried both apps and same out come.

How would I check that from my phone? Not super familiar with bonjour. I also have a Windows PC or Mac I could check with if necessary.

It appears that the only app that seems to be working with this feature is the paid Channels: Live TV app on iOS. It doesn't matter what combo you use, it just seems that only that app is working.

That's what I found in my investigation at least...at 2am

I'll take a better look at it in the morning. Thanks for bringing this to our attention @getastro!

It’s working for me currently with the “Channels: Whole Home DVR” app on iOS and tvOS. Well, the latest TestFlight version, at least, is.

Same, I took a screenshot yesterday in the beta and sent over the issue, all necessary settings are on, access local network for beta and current release, and it is not working with either beta or released channels on iPhone 6s or iPad 2019, the option just does not come up anymore, that was a handy feature as you could use your iPhone/iPad as a remote control for your Apple TV. Definitely broke.

The issue is caused by a change in iOS 14. We're uploading a fix to TestFlight.

Just updated the beta and that works now.