New (to me) Episodes option

Please excuse me if this suggestion has already been made ...

Use Case - I want to create a pass for a show that is in re-runs. One of the recording options is "New episodes" v. "All episodes". This apparently means "First Run" v any episode. I just tried this with the current version on an AppleTV 4 and choosing "New episodes" selected none of them, because the series was last broadcast six years ago. Choosing "All episodes" selects all of them, of course, but I have found in the past, that a series can be broadcast from the beginning again and I end up with episodes that I have already watched.

What I would like is a "New to me episodes" choice that records only those episodes that I have not watched completely, emphasis on "completely". I presume this would require Channels to keep track of the episodes recorded, tracking which ones have been completely watched, and record only those that have not been recorded and not been watched. This list would be deleted along with the pass if it is deleted.

I emphasize the episode having been watched - shows often get garbled in my locality, I suspect air traffic as one possibility, making them impossible to watch, so I delete them, but would like for them to be re-recorded if they are broadcast again.

Add additional feature would track the meta data for episodes so that I could run through the watched (and deleted) episodes for reference, marking episodes to be re-recorded (should they be rebroadcast). That's a long shot, requiring some waiting, but should be easy to implement.

This would use some memory to store the show's history, but it would be the end-user's choice.

Channels will not re-record episodes that it has already recorded. You should not get duplicate episodes.

Is that "already recorded" list stored with the "pass"? Deleting and recreating the pass would cause all episodes to re-record?

I know my case is probably rare, but I still have the issue of an episode's recording being garbled and would like for it to be re-recorded, which sounds like it would not since it was already recorded. If we could convince the DVR that it had not recorded such an episode, that would work. "Deleted without prejudice", to borrow from legal jargon.

And I do realize this is probably low priority.

Is that "already recorded" list stored with the "pass"? Deleting and recreating the pass would cause all episodes to re-record?

No, the system tracks it. Deleting the pass and re-creating it will not do anything.

Manually scheduled items will re-record. Also you can tell Channels to re-record things that are part of a pass. Find your pass on the Channels DVR Server web admin and click Advanced. You'll be presented with the option to re-record episodes. 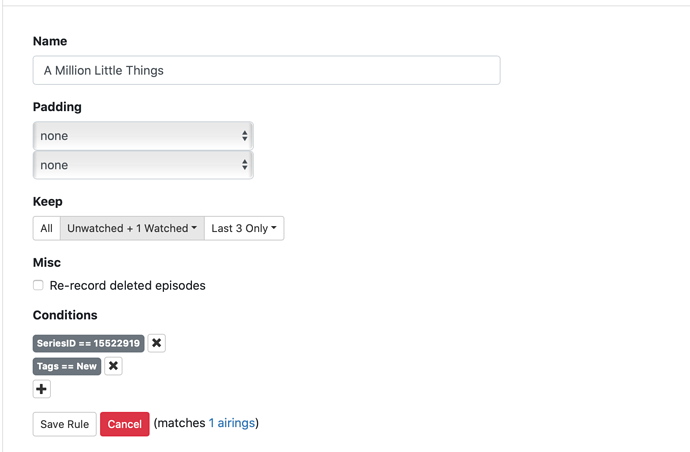