On AndroidTV (ShieldTV), if I have a PIP window open then exit the Channels app, the PIP persists as an orphan in the Android TV interface with no ability to CLOSE the window.

As I read elsewhere, I attempted to map a remote button to a "Close Foreground App" action. Sadly, this option is not available in the "Button Mapper" version I am using (@ v3.09).

Request: Would it be possible to have the app CLOSE an open PIP window upon EXIT? Maybe as an option, as I suppose some user might enjoy seeing the PIP outside the context of the Channels app.

For the time being PIP is disabled for me.

Thanks for you consideration

Have you tried long pressing Home ... on the FireTV it gives you option to maximize or close.

How are you exiting the app? It sounds you're asking the OS to kill it, in which case we might not have any opportunity to know or react.

Same thing happens in FireTV you can close Channels DVR and PIP keeps playing (which I like) long press home button gives the option to close. AndroidTV might act the same way. 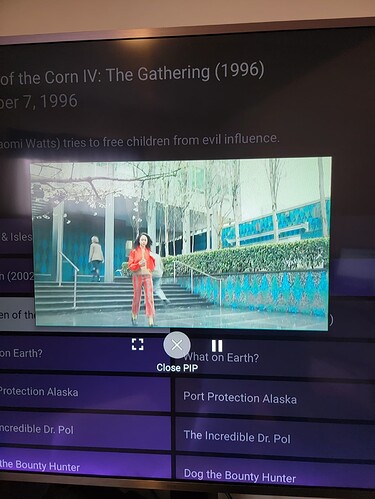 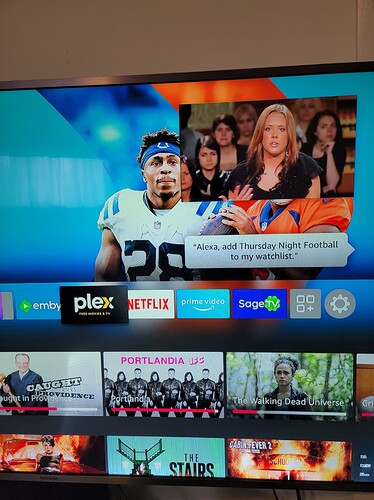 I exit the Channels app using the BACK button on the ShieldTV remote. This method effectively guarantees the PIP will be opened.

Using the HOME button with the PIP window open produces the same effect - orphaned PIP window. However, closing the Channels app with HOME button without a PIP open works just fine - might be a good workaround to my current approach...if I can train my thumbs!

Note: I've been using the BACK button to exit ~everything~ all these years...which is probably not the intended method now that I think about it!

See my reply below. This might be a workaround for me! Though, long press on HOME does not close the PIP on ShieldTV.

According to SHIELD Remote: Tips and Tricks | NVIDIA you can double tap home to get the PIP menu

When you say "orphaned PIP", is video still playing in the PIP or not?

Double Tapping the HOME button only brings up RECENTS view. No PIP functions. 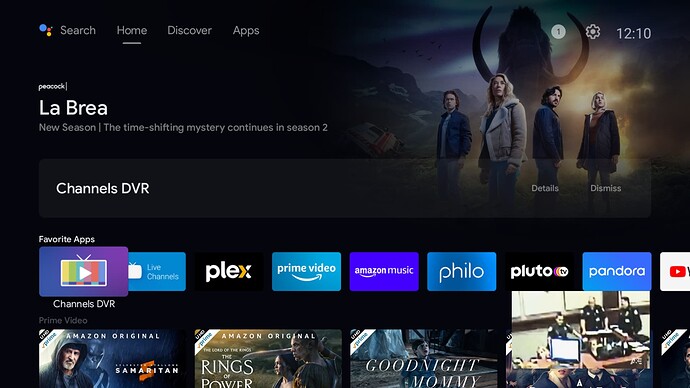 Interesting. Same revision here. What did you do to see that notification?

Dinking around just now, I do see a notification/number icon appear (next to the gear icon - like in your image) on the home page. When I click the number, I see a "Channels DVR" window. Clicking that gives me PIP controls...(Full Screen | X | Pause). A few extra clicks, but it works.

I wonder is there is a more direct method to open that notification automatically. Poking around I do not see a setting.

I can map a long-press on the HOME button to access notifications, still need to click it...but more directly...

Note: Full screen view shows the Channels timeline even though the app is not ~running.

I just get that automatically if I exit Channels with a PIP active. Just a thought....I enabled 'Nvidia Share' under 'Device Preferences > System' which redefines the HOME long press function. Maybe a side effect is to automatically show the overlay.

I had removed the Channels ribbon from the Android TV home screen (On Now, Up Next, etc.) long ago.

Clicking "Customize Home Screen" button just now, I added back Channels DVR ribbon; the notification (per your image) becomes visible. Unchecking the 3 options under Channels (On Now, Movies, Up Next) removes the ribbon (aka clutter) but does not seem to remove the notification. Survives a reboot.

I think I am good from here. John, thanks for the screenshot, got me onto the right path.

Everyone is reporting different versions of this, but I'll report here my version in case the devs one day want to fix this.

Under these conditions, two things seem to happen:
(a) Suppose I was playing with PiP, I shrank the window to the little side tab so that it was out of the way, and then I update the server. The PiP window will be killed.
(b) Suppose I am NOT using PiP and update the server. Then the ability to switch to PiP (specifically, the little button in the toolbar) will disappear when I start new content, and I will have to force kill the app and relaunch to get it back.

A third bug in this sort of category is if I am playing using PiP and some sort of "sound disruption" notification occurs (eg I take a FaceTime call on the iPad). After that, sound in the PiP window will be gone and again a force kill and restart is required.

A fourth bug (but lower priority because it is maddeningly random to reproduce, just if you see something in the code that looks relevant) is that SOMETIMES (but only sometimes...) the jump fwd and jump bwd buttons while in PiP will not work. More precisely, mostly both will jump fwd, more rarely either both will jump bwd, or both will do nothing.
(It's also very bizarre, and I can't see the reasoning) that the buttons in PiP jump fwd/bwd by 15s, NOT whatever I chose for fwd/bwd jumping in the UI, as full screen playback!)

It's also very bizarre, and I can't see the reasoning) that the buttons in PiP jump fwd/bwd by 15s, NOT whatever I chose for fwd/bwd jumping in the UI, as full screen playback!

Perhaps this is due to the OS managing the PiP window and its controls. In other words, once you put a stream into PiP, Channels (the app) no longer controls the video stream.

(If I am wrong, please correct me.)