The picture quality of TVE in the Channels app is a bit fuzzy when compared to the stream from an individual network app. It's difficult to show via photos, but it's most noticeable when there is text on screen — the pixels are more noticeable as opposed to a network's app stream where they're sharper. This also seems to be the case when using the Locast app vs. using Channels.

Not sure what could be causing this, but any help is appreciated.

Interesting. When we had Hulu TV, I used to remark on how much clearer the same channels were on the Channels App (using TVE) versus watching the same channels on Hulu's Shield TV App. Similar to what you are saying (but in reverse) text on something like the ticker on ESPN was instantly noticeable in how much worse the Hulu feed looked. I never had any issue when using the PS Vue app.

I've switched to Fubo now and it looks comparable to Channels but I almost never use the Fubo app. I will play with this more.

Do you have any TVE app's in particular? I can check Channels vs Fubo vs TVE app on a few. I'm curious myself.

The three I've been checking continuously are CNN, AMC, and FX, but I feel it's similar across the board. You're exactly right, something like a ticker makes it even more noticeable in a way that's distracting (probably only to select people).

If you do check, I'd love to know what you find out. Wondering if it's a bitrate issue or a bandwidth issue in my home.

For what it is worth, I am not having these issues. The picture quality for Locast and TVE is perfect. In the afternoon I often have 4-5 concurrent recordings and possibly Netflix or Hulu too. I only have a 300mb download connection.

I purchased a Philips "Kitchen" TV (Android TV OS) for the kitchen a month ago and being only $249.00 the picture quality is impressive with Channels.

As far as I understand it, the stream should be the same. But I could be wrong.

The streams are likely different. It’s quite possible that the stream offered on the network website is lower resolution/quality than what the app is able to access. In the past the Devs have stated Channels always accesses the best quality stream available on the site for TVE.

I checked some of this last night for you. Fubo no longer has Turner networks, so I could not compare CNN, but I did check out both MSNBC and Fox News (Fubo App vs Channels App) which have scrolling and fixed text. I checked out AMC and FX as you suggested too, but those were both showing movies and I think it's easier to spot issues with text or sharp lines on screen. I judged both streams for AMC and FX to be comparable.

In general, I felt that Channels (using TVE) and the Fubo app (on an Nvidia Shield) were pretty comparable. Fubo was much better than the Hulu app I used before. If I had to pick a winner, I would actually say that the Channels TVE feeds were just slightly better, but it could also be the timing of my back and forth testing. Both fixed and scrolling text were easy to read.

I uploaded photos that I took below. In these, the NBC Peacock logo is clearer in the TVE stream on Channels. This could also be just timing as the quality of various streams can fluctuate. 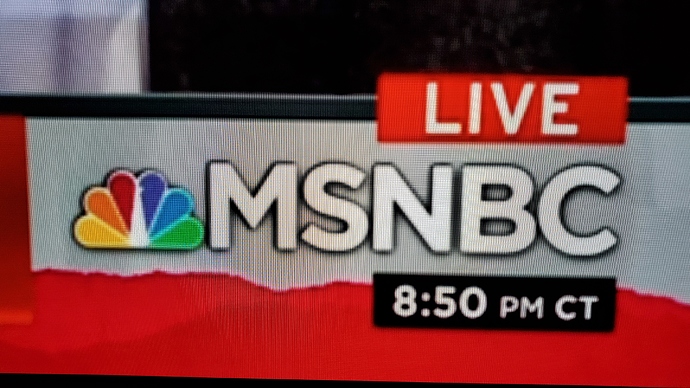 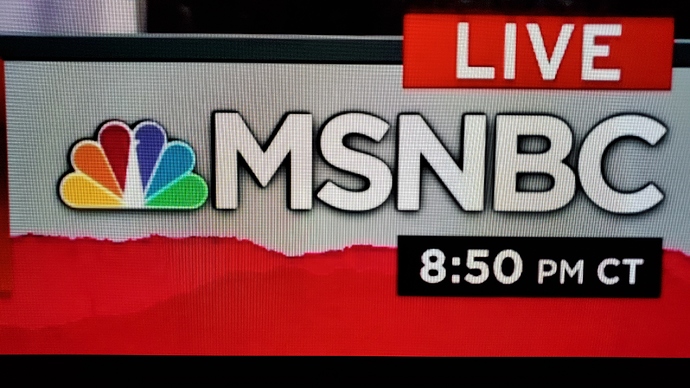 Can you pull up the streaming stats on the Shield, I know on Fire TV's you can

I've never found a way to do this. I think it needs to be integral to the app itself on the Shield (but I could be wrong). You can get very detailed stats while using Gamestream or Steam, for example, but I could not figure out a way to display generic AV streaming info. Maybe someone else has done so.

Interesting! Thanks! For me it’s the exact opposite, where the apps are much clearer with things like texts and logos being an obvious tell like you said here. Most people say TVE looks sharper, but it’s just not happening on my end. Strange.