I submitted diagnostics from the appletv app a few minutes ago.

I had been trying to get two matches in the Euro football championships playing simultaneously. When entering picture in picture, I could get one match to show. Then when trying to activate the second match, the audio changed to the 2nd one, but no image appeared.

Is it supposed to be possible to have 2 live streams at the same time or is it only meant to work with recorded content?

Apple TV doesn’t allow two video sources to be played at the same time (ie one in pip window and another full screen). To do this you would have to use something like quad stream. A forum search will turn up threads on that topic.

Thanks. It's the first time I tried to use PiP and I must say a) I thought the UX was pretty underwhelming (have to pause the current channel to access the button) and b) I don't see the point if you can only have a single channel / recording playing.

Perhaps where the recording or stream is in H264, Channels could allow two streams concurrently? The way I ended up with video from one channel and audio from another clearly isn't right.

Anyway, I'll check out QuadStream, although I really want just two streams, one that's smaller but so I can flip from one to the other as and when I want. And of course, the audio should adjust to match the primary stream.

I think for tonight's matches, I'll just get the 2nd match on my iPad.

Perhaps where the recording or stream is in H264, Channels could allow two streams concurrently? The way I ended up with video from one channel and audio from another clearly isn't right.

Channels does not control PiP. It is a system-level feature, and its limitations and quirks come from your OS/device, not the app.

This is simply not the case. From apples website: 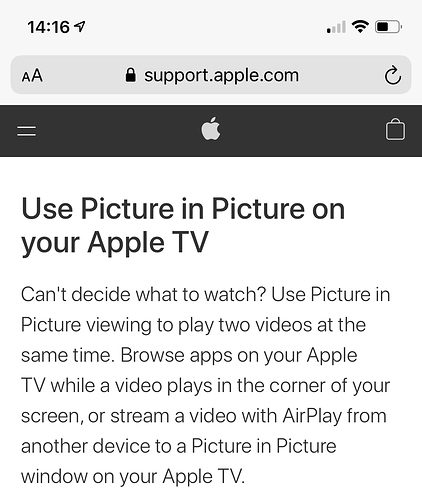 Quite clearly it says you can watch 2 streams at once.

The annoyance of pausing the stream is because you can’t bring up the timeline with an upward swipe from the remote apps in the channels player. Pretty sure this is possible in any other appletv video. I’ll check later.

Quite clearly it says you can watch 2 streams at once.

AIUI, that is only for streams from different applications; a single app cannot present both a fullscreen video and populate the PiP overlay.

If that is not the case, then I apologize and stand corrected.

Apple's own demo shows two videos from a single app.
See here for the video: https://developer.apple.com/videos/play/wwdc2020/10176/?time=50

I tested on my AppleTV last night. And while not every app that supports PiP allows two streams from a single app, some do.

I also today was able to get one video going full screen while a pip window from Channels was still going. The audio from both was audible. I would swear in the past when I tried this the first video would pause as soon as the second started. Maybe they made some changes. Very cool.