When launching Channels after it has been closed for a while, the main menu appears on the left side of the screen. To get out of the menu, you can scroll up/down and select one of the sections (guide, library, recordings, on now, etc.). However, you cannot just press the right arrow to get straight to the guide or whatever screen is visible behind the menu. It seems a little less intuitive to me to have to press the select/ok button to get out of the menu. This is also different than the behavior when the menu is called by the user at which point the right arrow can be used to get out of the menu and back to the guide (or other screen).

What views are you seeing this in?

Because this isn’t how it should be reacting. And navigation UX isn’t dependent on how you got to the navigation. It sounds like there’s some kind of issue with the focus engine on the view you’re experiencing this on. For me it mostly all works outside of a known bug when focused on Settings.

Could you explain what view it’s not working on and also provide a photo of the screen?

Additionally, the sidebar shouldn’t be showing when the app launches. It should be closed. Please relay what view you’re opening to that’s doing this. And a photo would help too! Thanks!

I was slightly incorrect in my original post. The issue doesn't appear when launching after the app has been closed but instead when "resuming" the app. If the sidebar is visible when returning to the home screen, the app resumes with the sidebar still visible and producing the results described above. When I force quit the app and then re-launch it, it launches straight to the guide with no sidebar as expected. My startup settings are guide & app launch for reference.

I confirmed this is an issue with guide, on later, up next, search, & settings. It is not an issue with on now, recordings, & library. 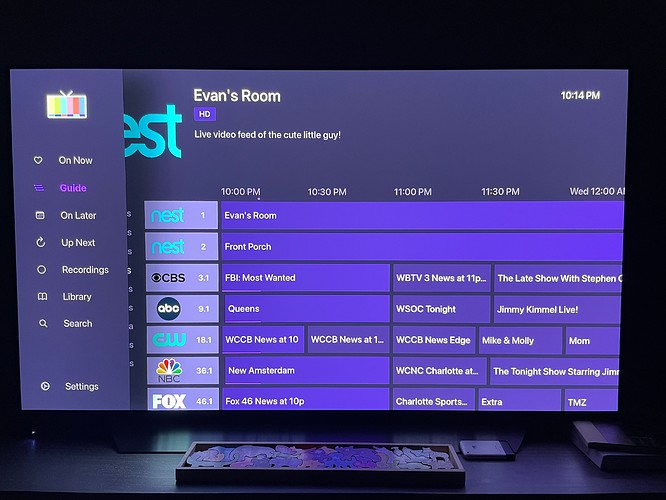 Great thanks for the details. This is a focus engine issue as you can see your Guide placement has nothing to the right on the main view, so it can't focus anything. This should not matter as things are in place to cover it, so it seems it's not working, We'll look into it.

Additionally, this is tricky because for me, ALL of this works, because my sidebar has a different number of items in it, therefor different placements. So that's why I'm personally not seeing any of this. And for you, it's probably worse than some others.

The screenshot is a big help, thanks!

While the developers have recognized this as a bug and intend to fix it, I believe you may be able to work around it with the server setting to display the guide on launch and / or resume.

Yep, I thought about that. However, there are some times when I leave the app from another section I want to come back quickly and do not want to return to the guide. It’s no big deal and is a minor inconvenience but thank you for the suggestion.

Heard. You could also try switching back to channels from the Android recents menu, rather than clicking the app icon.

Where do I find the Android recents menu in tvOS?

Where do I find the Android recents menu in tvOS?

For what it's worth, thats why this setting doesn't take you directly to the start up section. It waits a few minutes before that actually kicks in. It was designed this way for just what you described.