Which setup is going give the best result for Channels

HDhomrun Flex4k, Nvidia shield pros on both TVs + 2tb usb drive on one shield. Channels dvr running on one of the shields.

This one, by far.

Great thanks, that’s also the cheaper of the two, since I have the mini already.

Holding out for BF/CM sales before I purchase the equipment. I went ahead and installed Channels dvr on the mini a little while ago. During install, I noticed an option pop-up, something like: “allow channels dvr to wake computer for recording”. I opted in, but I’ve never seen that option mentioned on the forums - just the recommendation to set computer to never sleep.
Is the wake-to-record option bulletproof? I’d rather go that route if possible, but don’t want to miss recordings.

Also, I use the mini to work from home frequently, nothing intensive, just web-based versions of Office and a web-based payroll app. Will I need to set Channels dvr to run in the background, using the terminal commands provided by Channels, or is that option for something different?

Thanks again for the help

Is the wake-to-record option bulletproof? I’d rather go that route if possible, but don’t want to miss recordings.

I don't know the answer to this, but personally I would refrain from allowing the DVR to sleep. If you use tuner sharing or any internet streams (TV Everywhere or Custom Channels) you will have a poor experience, as your client won't be able to watch on demand because the DVR is sleeping and not responding to requests for data.

Will I need to set Channels dvr to run in the background, using the terminal commands provided by Channels

I'm not sure if it's drastically different on the Mac, but in general the DVR should run at startup. The DVR itself is quite frugal on resources, so working while it runs in the background will be fine. (You may notice a slowing if you have remote streams transcoding will you're using the computer, but it's relatively negligible.)

Also, let me chime in as another to recommend the Apple TV route. The UX is far superior to anything that Android can deliver. This is not just for Channels, but I find that the tvOS version of other software (Netflix, Hulu, etc.) to be far superior to the Android counterparts. Of course, this is all IMHO, YMMV

Enter this in terminal and your Mac will never sleep.

I'm sure a Mac user or one of the devs will reply to your question about running it as a background service.
Channel DVR Server on Mac
Note that the hardware transcoder is not available when running as a service.

I am setting up a new system well, and I also have a Flex4k. Channels dvr is temporarily on my iMac. I was considering Rasberry or Nvidia, but would this be a better alternative:

I would just confirm the processor supports quick sync, which will help with transcoding. Obviously that’s a ten year old machine, so I’d pay special attention to what kind of warranty is included. Assuming it supports quick sync and doesn’t have any hardware problems it will make a fine server. Of course also keep in mind that it won’t be able to update to the latest mac OSes. I assume they will continue releasing security fixes for the version it has for at least a few years, but not forever. Something to keep in mind.

I am confused regarding the minimum specifications--According to the website, the recommended amount of RAM is only 1GB, but in searching through the archived postings, people are saying to not get less than 8GB....

I was leaning toward the the new old stock mini with the unused hard drive, but since the RAM in not upgradeable, I don't want to regret it down the road.

You could do like me and get an Intel NUC, load it up with ubuntu server and you are in business. Here is something that is from 2017 so its a bit newer and a 7th gen i5 with 8gb memory. Add a USB hard drive enclosure and a huge hard drive and you would be good to go. It will take an SSD in addition to the included M2 as well. 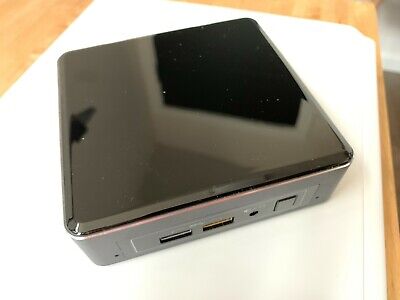