[SOLVED}Linux Server: "Reconnecting" when trying to view in Chrome

Didn't realize, unlike Windows, secondary drives have to be mounted to be accessed and apparently I was temporarily mounting when I navigated to the drive through File Manager. Once the temporary mount dropped, Channels couldn't find the storage drive.

Installed on a new Linux box as I am looking to migrate to a RAID based server. Was working fine, then updated the kernal this morning and now when I try and watch via Chrome (same machine & another machine) it says "reconnecting" as the video window just shows the splash screen of the show I am trying to watch. Happens on all sources (Air, Cable, Pluto).

That usually means it cannot open a stream. What about entries in the log?

I'm embarrassed to ask, but where are they? I see a log folder in my DVR storage path, which includes subfolders Recording and Comskip. Each one has a number of folders included that are just numbered 1, 2, 3, etc. Under recording it just has one "recording" log per folder, and under comskip there's several files (ini, etc). This was for watching live tv, is there a specific place that log would be?

I'm embarrassed to ask, but where are they?

In the DVR server's web UI, go to Support > Logs.

Finally found it as I couldn't find a link on the settings tab. Its now working, but I did find this example of error when it wasn't streaming:

Looks like you have a permissions issue. Ensure that the user account the Channels process runs under has the proper write permissions for your DVR storage location.

no such file or directory

This usually means the external storage drive was not mounted.

It's an internal raid array (3 drives under Raid 0). I'll confirm if the drive is having connectivity issues if this issue happens again.

OK, more on this front. This is a box I've setup for testing before migrating from Windows 10 (our main PC). I had the same problem when trying to view a recorded show, the recording showed under "What's Next" and I clicked play, but that's when the "reconnecting" started again using the Web player. I checked the logs and it said "no such file or directory" from when I tried to play.

I went into the file viewer (whatever the Linux app name is for navigating files through the GUI) and I could navigate to the folder and see the files. I went back to see if it would play and viola, it did.

The physical storage device is a 6TB Raid 0 pool (3x 2TB) using a hardware raid controller. The OS is on a separate SSD drive and the OS automatically maps the raid drive under the /media folder. I'm wondering if the dynamic link is somehow "going to sleep" or are the raid drives somehow going to sleep and not waking up except when accessed (which you would think Channels DVR trying to access would do).

As you can probably tell, I'm relatively new to Linux, so I'm not sure if this is the right place to ask the question, but will start here since some here use Linux and understand the structure of how Channels utilizes the file structure of Linux. This is also my first foray into hardware based raids, previously I used DriveBender on Windows to create a seamless drive structure for the Channels recordings.

Thanks for any suggestions.

OK, I can 100% of the time create the situation I mentioned above. Each time I reboot the machine, if I go to watch a show via Chrome, I get the "recconecting" message on the webplayer. If I go into file explorer and just click on my storage device while the Chrome player window is open, the recording will begin playing immediatly. It also happens if the machine is not active for a period of time. It's not the machine going to sleep, but it seems like the raid drive goes to sleep and only will wake up when directly access and not when Channels is trying to access it. Any suggestions?

Pretty strange. What kind of hardware raid controller is it? Sounds like a bug in it or in the raid driver. We use standard linux system calls to access the filesystem.

H700 in a Dell T610. Also happened on the older card in it (perc 6i), so wondering if it's a software issue (or perhaps a hard drive issue).

Was on a mini vacation and just had a chance to start playing with this machine again. Reinstalled Mint Linux 20.1 and Channels DVR. Still have the same issue.

Here's how I can easily determine if the drive is being seen by Channels (see upper right hand corner, if drive is showing, it's available, if it just says idle with no drive info, it's not there): 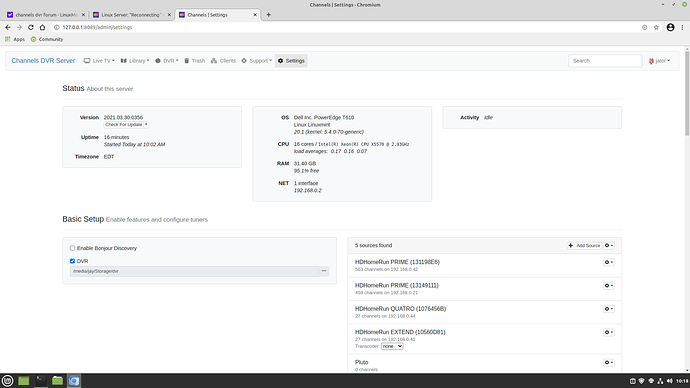 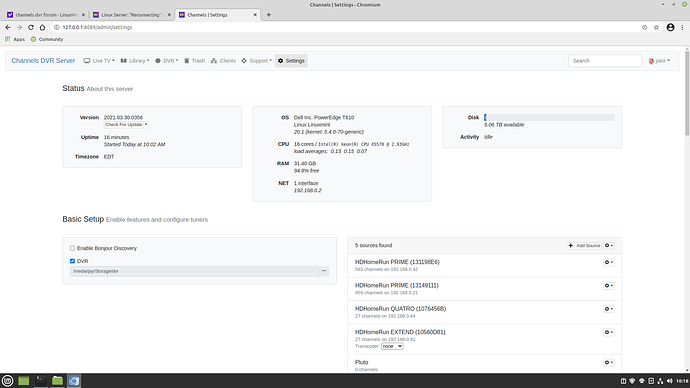