I am not seeing any episode thumbsnails/images.
Is this the expected behavior? 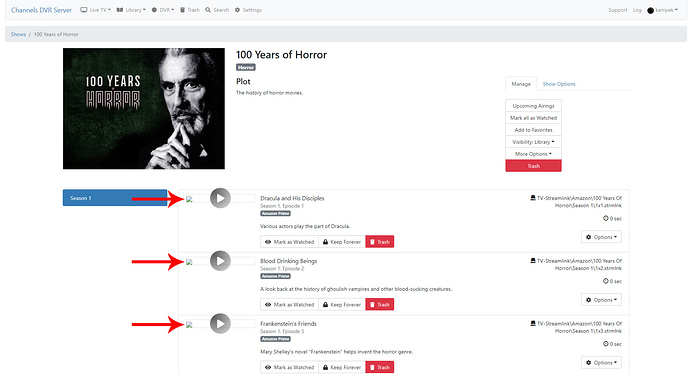 Episode thumbs in Channels come from grabbing a frame of the video. With stream links, Channels has no access to the video, so it can't create a thumb.

That being said, it SHOULD be failing over to the series art. So I'll take a look at it!

This has been resolved in the latest pre-release.

This pre-release changed the "DVR" menu in the web so that shows are no longer grouped. Instead, you have to go under Library -> TV Shows -> Recently Uploaded -> More -> Change order to Alphabetical. This took something that was one step and turned it into three. Also, going this way breaks it up into multiple pages instead of just on one continual.

There also appears to be some instability as I've had the connection become temporarily unavailable from a few seconds to a couple of minutes while it tries to load.