Hi,
This just started (could it be recent update to Appletv version???) 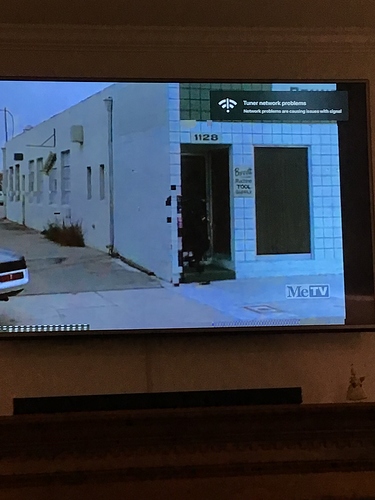 I means there were some fluctuations with the broadcast stream. It could be dropped/missing network packets, or a drop in broadcast signal strength or quality.

Usually you won't notice any issue, other than maybe a brief pause/jump in viewing, or the picture breaking up/decide issues (such as macro-blocking). Think of it as an informational message, letting you know that something happened. It's probably nothing, but it could end up being something.

If those messages bother you, you can disable them in your app: Settings > Playback > Signal Notifications. (And yes, they will only appear when your source is an OTA/cable tuner, not with any internet streams.)

Network errors indicate a bad connection between the HDHR and your Apple TV.

They are separate from signal notifications and cannot be turned off.

The HDHR is reporting that it is dropping packets when trying to send the video to your Apple TV (or your DVR if using Tuner Sharing).

Wow thanks for quick reply ,
But I still have the stuttering , pixelation issues pretty bad…
This is new issue since latest update …does it in beta version too (again local channels OTA, using HDHomeRun duo) only with channels app….direct to tv and silicon dust app do not suffer same issues….also OTA via dvr work fine (separate HDHomeRun unit different location/state).

Hmmm
It’s hard wired and I have rebooted the HDHomeRun unit
I’ll will reboot entire system..including router…
And Appletv
Thanks for super quick replies!!

Network errors indicate a bad connection between the HDHR and your Apple TV.

They are separate from signal notifications and cannot be turned off.

Thanks for the clarification.

Thanks all,
Total reboot of system got it back 100%

Have a great evening

If you can put a Windows/Mac or Linux PC in place of your AppleTV for testing, you can run a network packet loss test which will test the HDHR tuner using same network path your Apple TV uses (unless you have tuner sharing enabled).
https://info.hdhomerun.com/info/troubleshooting:network_packet_loss

I saw the same error yesterday and I was not even watching channels. I was streaming from Netflix, I was using a TCL Roku 4k with an Apple tv 4k last years model. The apple tv is hardwired, but the TCL is not..

I too have been experiencing the tuner issue, and I'm at 83% signal at the lowest 100 at best

Seeing same thing on AppleTV 4K after latest update. Hardwired on same switch as DVR. Not seeing on other clients.

Getting the same message with TCL Roku and Apple TV. Seems to be only on Channels, not on other apps (YouTube, Netflix, Prime). I was getting it with ATT internet 50 megabit. I just switched to Xfinity 400 megabit and it still comes up. It seems to occur more in the morning.

Have been seeing same error lately on latest Apple TV. Switch to my TiVo and works fine with no signal issues. Anyone resolve this?