Since the Channels app doesn't support iOS' native Picture in Picture, I'd been using the Channels Web UI to allow that feature, when I've needed it. I've recently discovered an easier method for live TV watching on my iPad via Channels DVR though, a solution which specifically incorporates PiP.

Rather than navigating Safari, or a bunch of bookmarks, which requires lots of navigation and taps, just to channel surf or set up a PiP window, I'm now using this app instead: https://www.tvstreamsapp.com/

I added the .m3u8 URLs for all of my favorite channels, which I got from the Channels Web UI.

The TV Streams app has versions for iOS, MacOS, and tvOS, and the channel bookmarks you add or edit sync across all platforms via iCloud. The basic version is free (ad-supported) and the Premium version is $8. A one-time purchase enables Premium on all platforms. 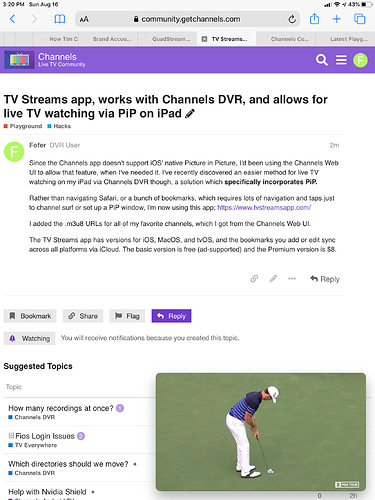 Incidentally, when using this app on AppleTV, enabling Closed Captioning turns on Closed Captioning (where available) in the QuadStream app, too! Which I appreciate, as that app doesn’t have a native UI for toggling CC. And it’s very useful there, specifically, since your monitoring multiple streams at once but only one has audio,

It’s an old and seemingly unsupported app, but I do have to say, I love 2x2 live TV with QuadStream. I unique and a “killer app” that will keep me with Channels and AppleTV for a long time.

And I’m grateful that Channels DVR has opened these doors for me to explore!

Does it work for OTA (Mpeg2) channels as well?

Hmm, I can’t say for sure, as I am TVE-only right now. But my guess is yes. I’m assuming it transcodes from Channels DVR?

You can try if you want, the basic app is free. Now you’ve got me curious too

Channels can play it natively, no transcoding needed. If this app can’t do that, I think it might be possible to force transcoding in the URL, although I’m not an expert in this area.

Ah I see, yes, I recall seeing URL syntax that forces the transcode.

But I also think this TV Channels app is using the same system-level built-in video UI that iOS Safari uses, which is why PiP works. So I don’t think you’d need to force anything, it would just work.

Edit: I was incorrect below. Even though I didn’t specify transcoding in the URL, the DVR seems to be transcoding the OTA channels automatically.

Just confirmed it is able to stream OTA Mpeg2 natively. Pretty slick. Now I’m trying to figure out if there is a playlist URL I can feed it to import all my channels in one shot... I did find a channel list using the same URL but stopping before specifying the channel number, but it doesn’t seem to like it

Found it! Put this into the playlist field and it will suck in the entire channel list! Looks like I have at least one channel it didn’t pull in for some reason, will dig further tomorrow.

Does it stream background audio only on the Premium version for iOS?

No, when you close the stream the sound stops.

That would be great. I’ll request that from the developer. I have lots of other suggestions to make this app better. For now, it’s worth it for me, for easy PiP on my iPad alone.

In the meantime for those who don’t know, here is a thread that shares a hack and bookmarklet to get audio-only streams playing in the background via mobile Safari.

Doesn't stream HD?
Need premium?
Whats the deal with this?

Also, channel limit without premium, almost all channels are greyed out. Pip doesn't work for all not greyed out channels. What's the story with all this.

They are greyed out because it only allows ten channels unless you buy it, I believe. Once you make the purchase all channels will become available.

I'm not sure what I'm doing wrong, but I can't seem to get TV streams to pull the playlist from my DVR server.

I tried (http://serverIP:8089/devices/ANY/channels.m3u)
it fails after 5 seconds and I'm unable to get past that.

Any suggestions on what I should try?

To verify the URL you can put it into a web browser. You should see a bunch of text with the channel details.

I'm not sure what I'm doing wrong, but I can't seem to get TV streams to pull the playlist from my DVR server.

Sorry but I have to ask. Are you replacing the “serverIP” in that URL with the actual IP address of your Channels DVR server?

Yes, I'm using the local IP for my channels DVR. When I put that url into chrome, a video player loads but nothing else happens.

Did You check your downloads folder ?

Try taking the .m3u off the end.