If anyone is still having problems where Channels is reporting downloads paused because of lack of disk space but the iOS Storage view in settings is reporting lots of free space, please comment here so I can look into it further.

So this isn’t a problem for anyone anymore?

I just want to echo everyone else and say this has made me so happy. I love Channels and have been a longtime P13x user. This convinced me to come back and so far so good. Between the spatial audio support and offline downloads, it was the only thing left on my wishlist.

Don't often browse around this area but when I saw something about Downloads on iPad, just had to try it. Fantastic work guys just in time for my vacation. While I'm happy to continue using the beta version and reporting any bugs, do you have any date when it might be released in Production?

Weird issue here to report, with a question.

I really want to thank the developers for this new feature. I know its still early in beta. I have not really used the virtual channels feature and had been holding that off until “home video” meta data editing support became available. Today it was so cool to have a virtual channel “broadcasting” music videos in channels. Then i had a video collections of superbowls, nfl films videos, etc. i had to reorganize them a bit in PLEX, but then it was very cool to import these, edit the metadata,…

In my case, i loaded in some home videos in mkv format. They play beautifully in channels.

I have one video (its short 350mb or so ).
I decided to test the offline download feature for the first time now that i had a small file to play with, to speed the test up.

If im in the library view, and hit the down arrow it appears.
When i tap it to play , channels jumps to a page with empty downloads.

This happens when on wifi, as well as when wifi is turned off..

Is there a restriction for “home videos” on the downloads?

Couple of screenshots to explain 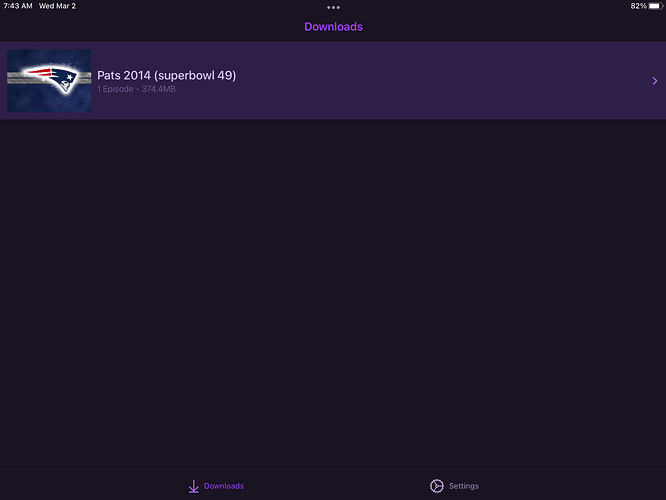 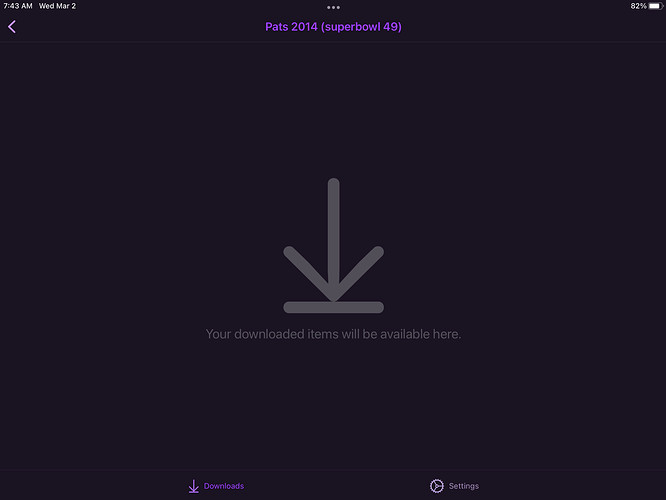 There shouldn’t be. There’s nothing different about how this all works compared to regularly indexed shows. But we’ll check it out.

OK. Please let me know if you need anything further to narrow what im seeing down.

I was able to reproduce this. I’ll check it out! 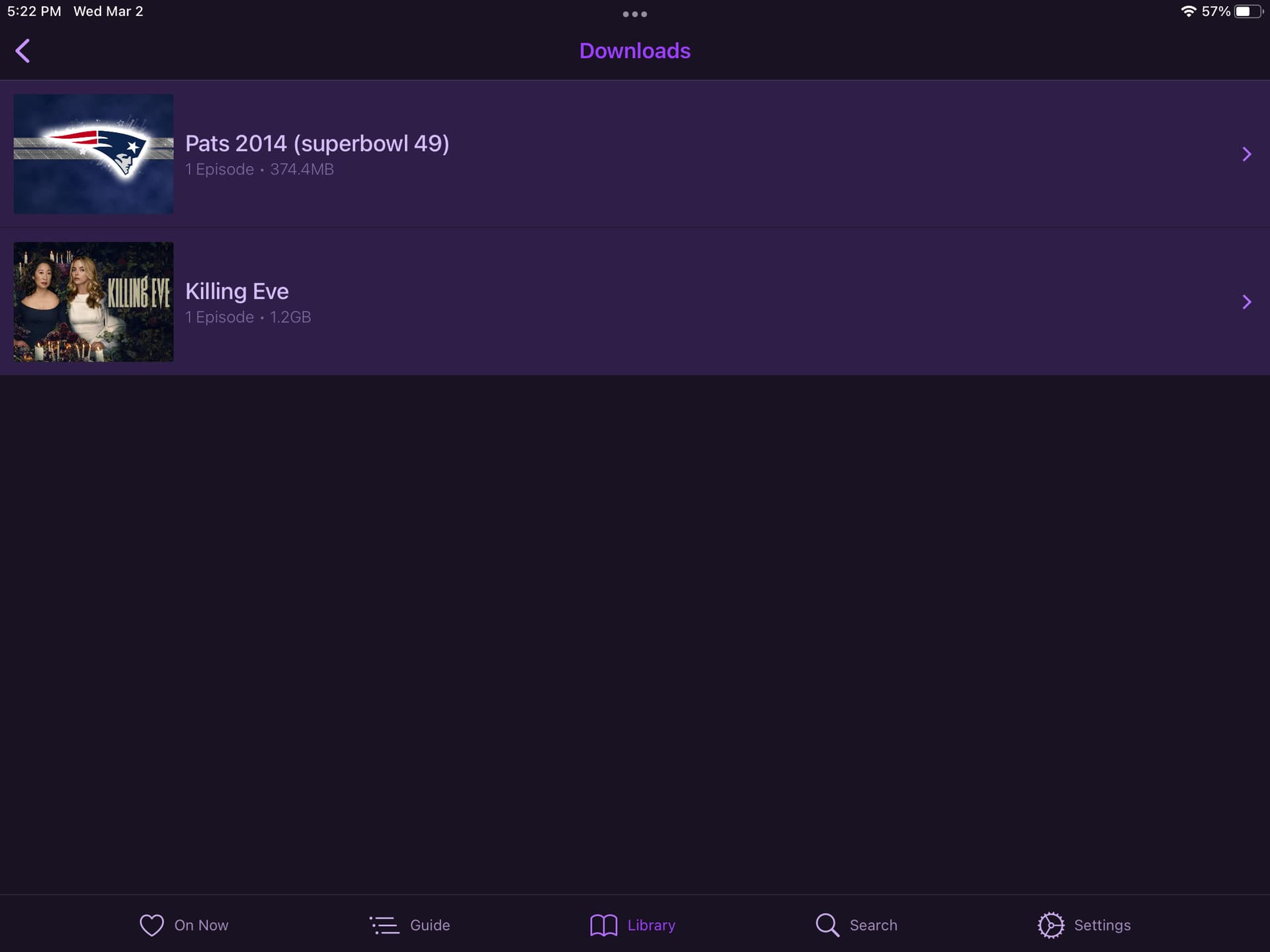 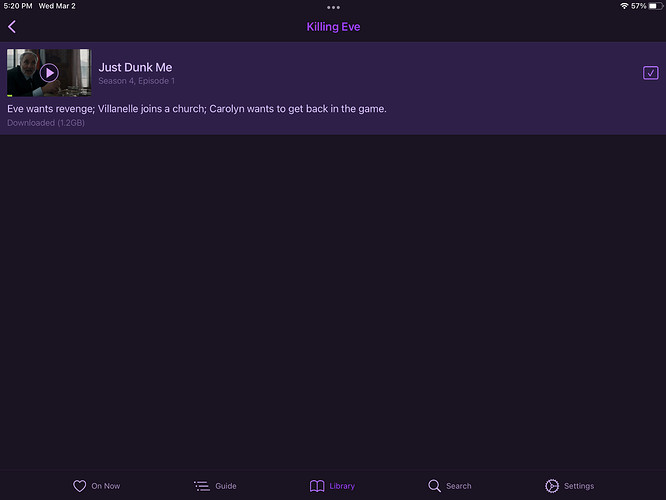 This was resolved in the latest beta.

Any plans to change the server activity to say downloading instead of watching? My first time trying this feature today, and was a bit confused for a while. Bonus for also saying the speed it's going at... I queued up a bunch on the client (iPad) and then had to search around for the specific episode that was downloading to see the speed it was transferring at. Sorry if this has been discussed already.

Downloads essentially use the same technology as streaming, so, yeah, thats what it says. We'll see if we can make this look less weird and confusing.

As for searching around for the episode to see the speed, if you just go to the actual Downloads list (The Downloads button on the top right of the Library tab), it will show you all of this information as it's downloading.

I know you guy said that currently this downloads in original quality. Are there any plans to allow the download quality to be changed?

Once the Downloads feature has landed and is settled and stable, then we'll begin looking at expanding it.

But honestly, transcoding while downloading would actually slow down the whole process, so you'd really want to save space to use it. Hardware transcoding happens at 2x realtime, max, which means that's the limiting factor. So a 2 hour movie would take 1 hour to transcode + transfer.

Totally understand going one step at at time.

I agree speed is definitely a factor. I guess it kind of depends on each individuals library if it makes sense. If each movie is only a few GB then maybe it doesn't make sense to transcode but if the server stores blu-ray remuxes for example, then it probably becomes more beneficial.

But honestly, transcoding while downloading would actually slow down the whole process, so you'd really want to save space to use it. Hardware transcoding happens at 2x realtime, max, which means that's the limiting factor. So a 2 hour movie would take 1 hour to transcode + transfer.

Perhaps then we could earmark specific recordings/passes ahead of time that we'd like Channels DVR to transcode overnight, to prepare for smaller mobile downloads later on?

Regardless of where it all lands, this feature is great. Kudos to the Channels developers. It works really, really well.

Perhaps then we could earmark specific recordings/passes ahead of time that we'd like Channels DVR to transcode overnight, to prepare for smaller mobile downloads later on?

This is all on the table.