The Rewind channel (and others without guide data) will not allow me to record it. When I click on that channel I only have the option to Watch it.

Am I out of luck for recording? Or am I overlooking something? Thanks.

Channels requires guide data in order to schedule a recording from its interface. However, if you wish to make an effort, you can manually created one-off recordings for a date/time/channel combination.

Here is the thread that delves into this topic; I recommend reading it through to the end, as the software changed a bit to where manual recording—while cumbersome—is nearly on par to guide-based recordings when viewing your library:

How to create a Manual Time/Channel based recording job Hacks

Why not just add the guide info by search?
If it doesnt show just click all lineups and then select the feed.

What @slampman is saying works for HDHR and M3U sources, but not TVE.
If there is no accurate guide data available for your source, you can select a station/network that has regular 15, 30 or 60 minute blocks of programming and just use that so you can record. The recording info will of course match whatever the guide shows. I do this for one M3U channel and assign Cartoon Network for the guide data (mostly 15, 30 and 60 minute blocks of programming) and just add padding as necessary.

If you do this, make sure whatever guide data you select isn't something you might want to record from a pass, because Channels DVR remembers what it recorded and won't record it again from a pass unless you change the advanced pass to Re-record deleted episodes and delete the recording.

I posted about this years ago.
The 24/7 channels, like Rick & Morty, can not be recorded.
The guide just show one never ending block of the same show.
I guess no specific guide data is available for each episode that airs, even though, does seem like they air them in a loop at times.
I guess it to prevent users from recording entire series so easily, lol.
All i cared to do was record the rest of the episode i was watching, so that i could finish it later after i went to bed...but..nope. cant record that channel.
Nor can you record the 24/7 weather channel as well, which is something i wanted to do at one point when there was a huge weather event near me and they had live coverage.

Told this is normal and expected behavior and they saw no point in adding the ability to record it.
Guess it to much work to have it detect no guide data or one long time block and pop up "how long do you want to record for" box and user choose option etc.

With a little creative work it can be done.
Disable those channels in your TVE source.
Create a text M3U with the same channel numbers and id's with the url pointing to the same DVR and add a station ID for each.

Just for grins I tried it and it works. I added the stationID for Cartoon Network. 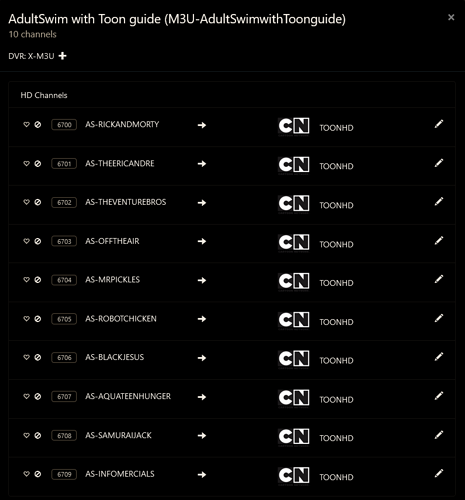 And then scheduled a few recordings 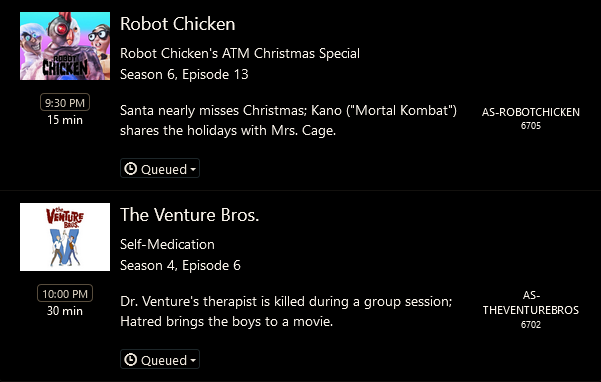 Every thread and every problem around here lately requires a workaround, or a hidden api, or a magical dance that’s not documented. Aren’t you tired of posting the same thing over and over every day? Who ever is able to, Just sticky this constant nonsense already.

Hey that looks good, would you mind sharing the text of that custom M3U here please?

The text seems quite explicit in the screenshots. Basically, the exported M3U playlist is kept the same, but the tvc-guide-stationid tag has the same content as Cartoon Network, which is 60048 according to the screenshots.

(I assume you can then edit the metadata after-the-fact to match your desired data.)

Basically, the exported M3U playlist is kept the same, but the tvc-guide-stationid tag has the same content as Cartoon Network, which is 60048 according to the screenshots.

Even though it would be great to not have to use a workaround, I'm just thankful that one exists. I'll be giving this a shot sometime soon. Thanks for all of the suggestions and examples!

Warrens I would assume this is an OTA channel you are picking up through an hdhomerun? If so you can report the missing guide data to silicon dust and they will update their stuff and send off to the guide folks to add it. I did this for Rewind TV probably 8 or 9 months ago.

I was just giving one example.
Too much work to do that, and for something i would consider a basic function, to record....
My "workaround" i used briefly, as it was already setup at the time, was to use the m3u from channels as a Emby tuner, and its guide populates those 24/7 channels. So i recorded from Emby.
That was a while back, have not needed to record those non-recordable channels since then, but would be nice to have them be able to be recorded natively with no funky "workaround". But is minor thing to me at this point.

Too much work to do that, and for something i would consider a basic function, to record....

Totally agree. Many have asked for a way to manually record be "built in".
I only do workarounds for things I want bad enough to make it worth my effort.
But sometimes I just like playing and learning.

something i would consider a basic function, to record....
My "workaround" i used briefly

You're right, it is usually considered a basic function; also getting it to work can also involve "workarounds".

However, based upon your responses (and those mirrored by myriad users) you don't remember VCR+, nor the numerous "jokes" about programming a VCR. This is the modern equivalent of something many thought banished to history: recording requires guide data (VCR+), and time/channel-based recordings required advanced knowledge (programming the VCR itself).

You may think the analogy contrived, but if you were born in the 80s or before, the analogy makes perfect sense.

Haha yea, I remember those "VCR+" codes! Thanks for the blast from the past

I had one of these: VCR Plus+ Instant Programmer - New In Box | eBay

And then, I'm pretty sure the VCR+ "tech" was later included in one of our VCRs. It all felt like magic. Good times!

Vaguely recall VCR+, never owned one that had that. But it was NEVER popular or mainstream. Of if their model had it, was never used.
Also, even those fancy models, you could just use it normally, and ignore the VCR+ bit.

VCR+, if i recall, was not functional if you had a cable box, or tuner adapter device, and needed the VCR to record on it Line In or Coax Ch3. the + programming feature set base don the code, told the vcr to tune to that channel, so you would be limited to coax input only. Back when cable over coax was all analog, VCR tuner would work, but even as early as the mid 90's cable companies had some sort of way to make the signal only work if you used their box. Some channels, those over 99, also only existed on their box.
2001 is when our provider converted to digital signal only, and made the built in tuner of the VCR or tv useless.

back then, all i did was know what time and channel i wanted it to record on.
Moved on to DVD recorders(skipped SVHS VCR) and that did not have anything like VCR+.
(Even so, we always had a cable box, so vcr/dvd rec on its line RCA input channel always.)
I guess this means tech has devolved, now too complex to did this dumb simple function, record X channel from XX:XX to XX:XX , or for X minutes.

Emby, Was able to just click record, and click it again to set duration. I think, WMC also had that ability.

The idea that a DVR record function needs "Guide Data", well, what is guide data at its minimum core in order to produce end result, source(channel) and duration (start/stop or single value duration). The rest of the data truly is optional and is only for naming and identification purposes. The minimum data can be passed to the record function by the user. the rest of the metadata can just be auto populated with the existing generic guide data (name of program block, or have placeholder data if none exists).

There currently exists the option to add padding to recordings as well as other custom modification tags ...so there is already has the ability to modify those values stored for the recording process..

I had one of these: VCR Plus+ Instant Programmer - New In Box | eBay

Does those small booklet TV Guides still exist?
My mother used to have a annoying large collection of those things, highlighted and saved cause had adverts or things about her Soaps.

Yes. OTA HDHomeRun Channel 24.4 Fresno. When I view the channel through the HDHameRun app, all of the channel program info is there so I'm hopeful your suggestion is successful. Thanks!

, and time/channel-based recordings required advanced knowledge (programming the VCR itself).

No, and yes. Different situations.

If i pull up live the guide, or open the live tv channel, and want to just start recording starting now, why can't I just click record, and the DVR asks me how long, 30, 60, 90 min...etc" Done. simple.
It already exists the function to start a recording immediate while watching live tv.

If i know a show comes on at x time, then why can't i long press that block or channel in the guide, and set a "pass" or better see a "Record later" option, it asks me for time frame etc. again, simple.

the ability to preform these tasks seems to already be in place and functional.

The only hinderance that prevents it seems to simply be cause the "smart" guide data (metadata to me) is not fully populated for these channels. Like i mentioned, name of program, series id, descriptions, images, etc are really just nice to haves. If their code requires it, then possibly, they could add a way for it to just fill in generic data, 'Recording-Ch1-date-time" for example, when the user selects the manual record option in the app GUI.

The other option i can think if would be the user could manually edit the actually Guide data for that channel..I do not mean what currently is there to match up the channel lineup. Right click, edit, add program block with all the value options required imputable. Then, result, the guide now has the custom program block and user can select to record as with any other.
This would need to be done each time user wants to record something, and i guess, kinda mirror the idea of "programming the VCR" lol.
Using the custom channel .m3u appears to also accomplish this to an extent, however, there should not need to be the extra step of duplicating a channel that already exists natively and adding it back in such a janky way.