And some keep forgetting that a record function had to start somewhere. Record on, record off...then, record from x to x time etc.

If the current implantation of record functions is too complex at this stage for it to function at a basic level, with minimal data parameters , then it would fairly trivial to make a second basic one, that does just that. Or copy the current Record function, strip it down, and have the UI elements call up that record function program code when under the present "not recordable channel" scenario.

However, this is not ideal or very efficient. As it means the devs then have 2 sets of function code sets to debug and update.
Instead, Making it so that the existing record function code so that it can perform in this scenario would be most ideal. The 2 ways i thought of this being accomplished already mentioned in previous post.

You may think the analogy contrived, but if you were born in the 80s or before, the analogy makes perfect sense.

I was born in the 80's, and VCR was one of the first things i took apart and fixed when it broke (or ate a tape) when i was a kid. Ours never had the flashing clock, cause i read the manual

What i realize from your analogy, is that modern tech has gotten so "Smart"....it actually is quite dumb...in certain practical use cases that us older folks are used to it being plum simple.

EDIT:
To put it more in simple context.

What is Channels DVR?

A home media software made to watch and RECORD live tv and programs.

User can not RECORD programs on a built in auto populated channel.

Does it affect everyone: Yes, (TVE users at least)

Does everyone care: No

Should not have to do fancy custom "workarounds" to use basic functions on provided services.

When I view the channel through the HDHameRun app, all of the channel program info is there

If you map the guide like this it should work.

Search All Lineups for KSEEDT4 and choose that if found

If not found search for rewind 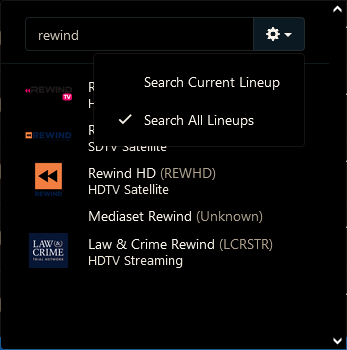 that should match your channel 24.4 on zap2it.com

Another reason for this request Sync Station Mapping

As pointed out by some others, I would like to answer that this feature is not currently supported by this software at this time. (At least in the manner that you may be expecting. As myself and other have shared, what you wish can be achieved, but not quite as easily as a fill-in-the-blank dialog. Others believe this is a shortcoming that you should not have to face; if you believe as they do, then I believe you should seek out software that will suit your needs. However, if you feel that the overall user experience of Channels supersedes other software, then I feel you should stick with it an learn the intricacies.)

Agree. As more users request things that aren't that difficult to implement, the devs have responded.
I mean we have a clock on the guide now, there is hope.

Yes a basic function that should be available. Manual recording, choose channel, choose start time, choose end time. Pretty simple one would think. I also asked why a channel without guide data can't have blank blocks of 30 minute periods that can be highlighted and recorded. I don't see how this is so difficult

I updated to the latest DVR beta software and they've baked in 1 hour segments on channels without EPG data, this now gives you the ability to easily record those channels. This is something I've wanted for a long time, great to see the Devs work it in!

With v2022.08.29.2159, TVE and custom channels which are unmapped will get placeholder guide data assigned automatically. [Screen Shot 2022-08-29 at 3.02.51 PM] [Screen Shot 2022-08-29 at 2.49.46 PM] The art, title and description are inherited from the Custom Channel properties (i.e. tvc-guide-title). A separate "series" is created per hour, so you can setup a pass directly from the guide for a specific hour block. You can also use advanced pass rules to limit to certain days of the week.…