Getting a new ATSC 3.0 Flex Tuner

The stations in my area (New Orleans) are converting to 3.0 in the next few weeks and I have decided to get a 4k tuner. What will I have to do to integrate it into Channels? Will the channel numbers be the same? Will I have to re-create season passes? What problems can I anticipate?

1st, don't expect to be amazed with 3.0. From a quality perspective it is usually just upscaled 1080p 59.94 fps. Each local station is different (the whole thing is still kind of a science experiment for them it seems sometimes) but in my market prime time shows look slightly better than 1.0. Sports however has tons of artifacts. Your experience may be different though, depends on the market.

The channel numbers will be 100+ their equivalent see my screenshot below. 43.1 and 143.1. Also note how you have to map them to their 1.0 equivalent.

Channels will see the new HDHR on your network by hitting "Scan Sources" in the DVR web interface.

Slampman has it correct. I'll take it a step further... I think it's a scam since they can make substations subscription-only if they see fit. The audio codec isn't supported anywhere hardly except the HDHR app and ChannelsDVR. Video and audio quality in my area is unwatchable and the NBC affiliate in Cincinnati appears like it's running at 15fps.

Is there really a future for linear OTA television in the next 20 years? Why would there be with internet streaming becoming the standard? Back in the day the citizens owned the airwaves so why should your legacy OTA stations bother with the FCC when they can stream and charge people for it. Nothing wrong with pay TV mind you, I'm just sick of greedy corporations and virtually all the media outlets on OTA are gigantic, greedy corporations.

I'd be happiest if they simply kept ATSC 1.0 and forced OTA stations to abide by the laws. No need to make my airwaves another profit avenue for the Hearsts and Sinclairs of the world.

You will find that ATSC 3.0 reception is better. Audio it is much lower than the regular stations.

I think you'll find it varies by market. In southeast VA, atsc 3 is deployed on a lower power translator. I can see the towers from my attic window where my antenna is located. I never get over 70% signal from that tower. My atsc 1 stations have to be attenuated on another HDHR becuase they cause errors. Audio however with atsc 3 is perfect, I have no issues with AC4 at all.

Compare the Audio to the HDHomeRun app you will really notice the difference. Most of us experience low volume ...

Lol I responded to that thread a while back. I have absolutely no difference between atsc 1 audio and atsc 3 audio. That's on appletv and also my iPad connected to an external display/sound bar

I live in a wooded area and the reception is better. Besides that ATSC 3.0 offers nothing for my needs. Then again, Cincinnati is pretty much a hillbilly town, so being at the forefront of technological advances is something we don't see here.

to the OP: take this thread as evidence that your experience may vary, just like anything in OTA.

Figure you would get a kick out of that ... I agree with you it varies as ATSC 3.0 is still in beta Silicondust. 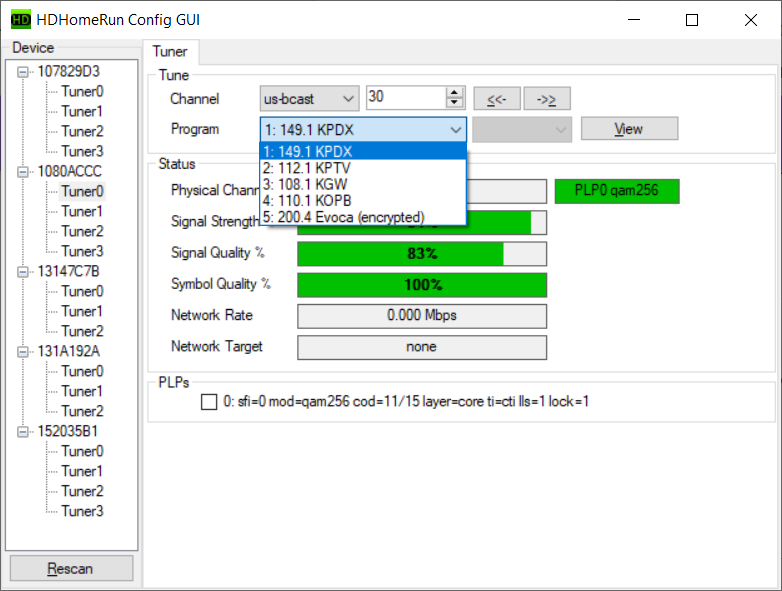 Yes, It can record a stream from each one at the same time.

Yes, It can record a stream from each one at the same time.

I do not think Channels DVR the way it tunes has that capability ... NEXTPVR probably does.

I did some experimentation and it appears that I was mistaken. I tuned 3 clients to a different 3.0 station on the same transmitter. All 3 tuned and worked but when I checked the tuner status the third was actually tuned to a 1.0 transmitter even tho the client showed it was on the 3.0 station when looking at the client info.

Just wanted to add that in my setup in the Charlotte, NC market, the Flex 4k has been flawless on both ATSC 1.0 and 3.0 signals. I also definitely see an improvement in picture quality with 3.0 on CBS and NBC. However, ABC and FOX i don't see any difference at all.

I did have some issues with my Flex about 4 months ago but the newest firmware has fixed them and its been rock solid for about a month now. Hopefully it stays that way

Your experience will probably be a combination of good & bad. For me, I get a very strong 3.0 signal, however get a lot of "no video data" errors with my HDHomerun tuners. Either SiliconDust or the local stations do not seem to not know how to fix the issue

Your experience will probably be a combination of good & bad. For me, I get a very strong 3.0 signal, however get a lot of "no video data" errors with my HDHomerun tuners. Either SiliconDust or the local stations do not seem to not know how to fix the issue

It Amazes me that on my FireTV devices Channels DVR plays ATSC 3.0 error free and the HDHomeRun app freezes and gets an audio error.