I would like to know if the picture quality was good on new and old Apple TV 4K compared to other TV boxes.

I read on this forum some people complaining about deinterlacing? Is it better to buy another device to watch Channels?

thank you so much

While I can't compare the performance of PQ with the older Apple TV 4K, I can compare it against a few different models of Nvidia Shields and Roku Ultras. I just received my Apple TV 4K this past weekend, and thus far, the video quality is completely inline with the Shield. In general, I've always thought quite highly of the Apple TV's rendering comparatively to other options on the market at time of launch (I own the Apple TV 1, 2, and until this weekend, actually still used the 3rd-gen model for AirPlay). From a pure, non-processed image perspective, the new Apple TV 4K seems to hold up well against the competition. The Shield's ability to do some AI-based post-processing however can help it achieve subjectively sharper images, without appearing to be overly processed, in some situations.

I have noticed some slight differences to color representation, but that is because the Apple TV 4K puts out a constant HDR signal (in this case, I'm using Dolby Vision), whereas the Shield only utilizes HDR when the content being played supports it. I wouldn't call the differences in color night-and-day; I have my OLED calibrated for HDR10 and SDR, but not DV (which is nearly impossible to do on my model). This is not unique to the new Apple TV 4K however. In terms of other decode performance, I haven't seen anything that immediately pops out wrt major quality issues such as poor deinterlacing. But I don't think I have watched any sports yet on the new Apple TV 4K, which is presumably where issues such as deinterlacing artifacts would have a more pronounced effect if present.

Where have you seen posts about the new Apple TV's video quality? I searched on these forums, but couldn't find much related to that.

Only by default, for some crazy reason.

TVs are not designed to run in HDR mode at all times and this will damage your TV.

Additionally, the tvOS UI isn’t tuned for HDR and will look washed out because of this.

Ok, that’s good info. Indeed, it is not my preference to run in full-time HDR mode. I honestly have only had the Apple TV 4K for a few days (I have bought 4x Shields since 2015 as I felt a bit burned by the 3rd-gen Apple TV, with its limited app ecosystem), and haven’t yet had the time to figure out how to disable full-time HDR or really tweak any of the advanced settings. Is it just a matter of disabling it in the main menu, and only when I select content to play that is true HDR will it automatically kick in?

Just go to the video settings in the tvos settings. It’s pretty clear.

Thanks. Yeah, the default setup doesn't really allude to this, but after doing some light digging around, I was able to set it to generally output SDR with only HDR10 or DV being activated when the content supports it.

It's not as clear as it should be. Apple, for some unknown reason, uses the term "Enable HDR" for full-time HDR, despite HDR being "enabled" with SDR and match dynamic range on. Stupid decision, but the TV has always been a bit "weird"

Thanks for this. Didn't realize. I made the change and colors are more vibrant now. I wonder if I need to calibrate again? I will give it a shot and see what happens.

EDIT: Calibration did not change for me.

You are 100% on the money. This is the way to run the AppleTV and FireTV for sure.

Does this also apply to Dolby Vision HDR? 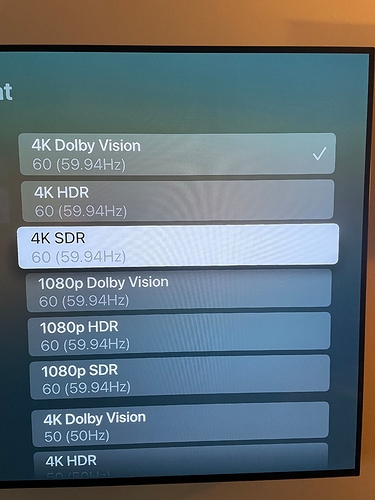 Posting on this thread as I am noticing an issue when recently upgrading from atvg3 to current atv4k. While watching, I now notice a split second video and audio pause that occurs every 10 to 20 secs. I have changed from default hdr settings to sdr with matching frame rates. As expected color/contrast much better but problem still exists. tvOS 14.6.18L569

Have you tried lowering the output resolution of the Apple TV? On one of my older '4K-capable' receivers, there is an issue with the HDMI port and it often has a hard time outputting a consistent UHD signal for long periods of time (>24hrs). If I set the Apple TV or any other 4K device to output UHD, after a period of time, the HDMI output from the receiver will basically start to crap out, resulting in split second to longer periods of blackout or pauses in video. Lowering the source device's output resolution (to 1080p for instance) will resolve this

Thanks for your suggestion. I changed the settings on my ATV and the problem still occurs. Maybe my hdmi cable? Although all of my other streaming services work great. I think I might start chasing SD support on this.

I sometimes have a slight stuttering that occurs when using the experimental audio and/or the experimental video options. I honestly don’t remember what one seemed to cause it, but sticking with the standard linear setting and standard audio setting within the Apple TV settings seemed to cure it. I also only ever notice it during nhl hockey so it very well might be something on my end and not a Channels/Apple TV issue. It’s worth a try though.

I just looked at my settings and I have deinterlacing mode set to experimental and video and audio both set to default. That seems to work best for me. I also have the resolution of the Apple TV set to 4K SDR.

TVs are not designed to run in HDR mode at all times and this will damage your TV.

I did not know these things. Fixed. Thanks!

I also found recently that I was noticing some… very subtle hitching on my shiny new Apple TV 4K. The content was 60 FPS h264 recorded via TVE. I turned on stats and found that it was dropping about a frame per second (output). This was using the experimental video driver. The content was not interlaced so the interlacer didn’t come into play I don’t think. Anyway, when I saw the dropped frames I switched back to the default driver and the frame dropping stopped immediately, and the hitch was gone.