I’d like to suggest a change to the way the menu system works. My experience is coming from the Android TV Channels App on Nvidia Shield, but it appears the Apple interface is similar. The current setup is functional, but I find the “Up Next” and “Recently Recorded” sorting to have limited appeal once the number of TV shows I have recorded expands. It takes too many clicks of the remote to view all TV shows (unless I am missing some short-cut).

I understand it is hard to design an interface and menu system that works well across all platforms while still being flexible to meet the majority of user’s needs. With that said, I would love to see an implementation of a Custom Tag feature which automatically sorts TV Shows into different categories based on the Custom Tag. It wouldn’t require removing the default “Up Next” or “Recently Recorded” filters either (It would nest them under the main TV Shows heading). It’s a bit hard to explain, so here are some poorly done Photoshop images to help get my idea across.

This first image shows an example of using a Custom Tag on a per-show basis when creating a season pass. The custom tags would be a user-inputted server setting. Once a custom Tag is entered in the server settings, they would then appear as an option to be applied to Season Passes or to individual shows.

Here is an example of applying a Custom Tag to a season pass: 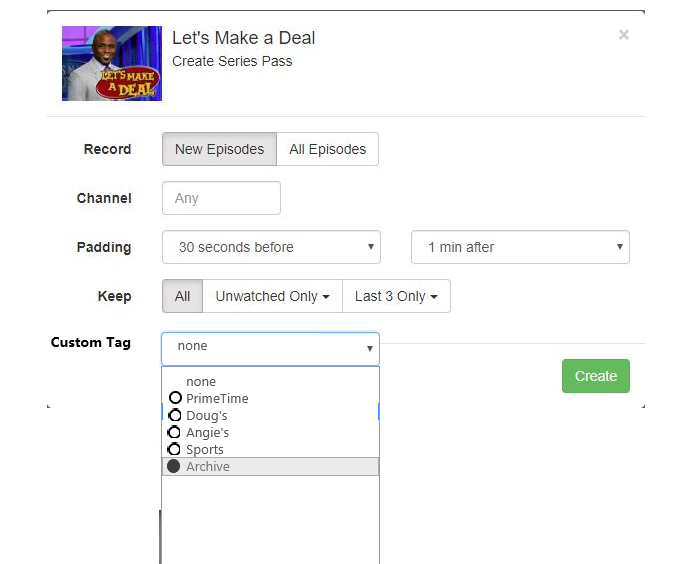 Adding tags would be completely optional and users who didn’t want to create custom tags would experience little difference in the current functionality of the menu.

Once a custom tag has been applied to a TV Show either automatically during the season pass settings, or manually on a per-show basis, it would then automatically filter recorded content based on these Tags. Moreover, it would make it easier for users to access all TV Shows. For example, there would be a new Main Category under DVR that just says “TV Shows”. Highlighting that option immediately lists all TV shows without any filters. Clicking on that heading however, would reveal a nested section that shows the “Up Next”, “Recently Recorded” and any additional Custom Tags the user has created. Here are a few examples. 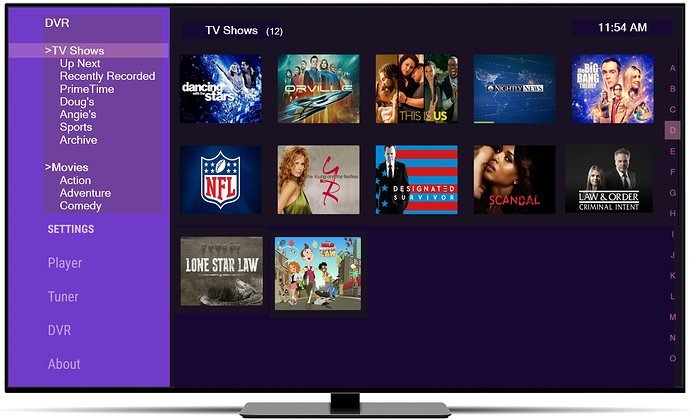 PrimeTime (only lists TV Shows with the PrimeTime custom tag): 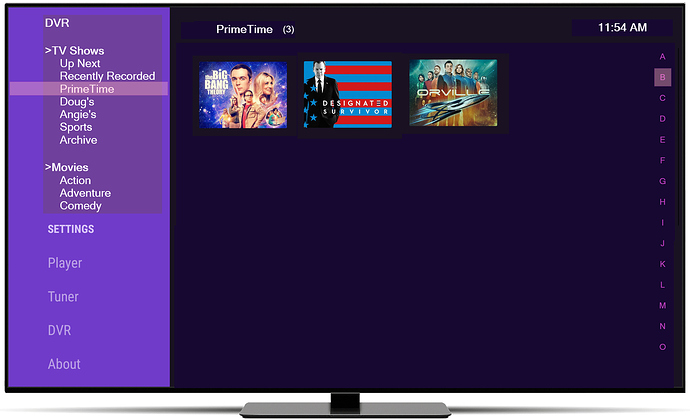 Doug’s (only lists TV shows that have been marked with the Doug’s Custom tag): 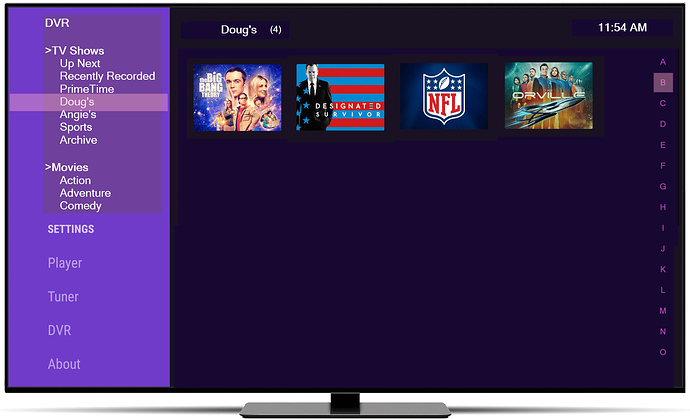 Shows could have more than one Tag applied and show up in multiple sections. Having the Tags do the sorting would also allow the recorded content to keep using the same storage location and structure.

While I am not sure of the technical limitations of implementing Custom Tags and filtering, it would make finding content so much faster and easier. Channels is great, don’t get me wrong, I just find the current platform menu structure to be a bit lacking.

What do you all think? Is the current menu system a final product? Do others think it needs some tweaking?