Could I have some help please....

At the moment if I move a recording from the default Channels DVR directory, the recording still shows up within the Channels DVR Apple TV app, however obviously the recording will not play as the physical file has moved location. Same happens if I re-name a recorded file.

is there a way to update the Channels DVR database such that the recorded movie is no longer visible in the recordings database?

In practice, you should never do that. But if you do, you'll need to manage it yourself

Channels does not really like it when you modify things that it keeps track of. But, if you are going to muck with Channels' database and file structure, then:

To follow up, you can not do what you were wanting to do. It won't know where you moved it. The best you can do is: move the recording to a directory you have set as an import, delete the original "recording" in Channels, and then run a scan to import it back in.

Though, I would take a hard look at what you're doing and consider why you're doing it this way. You're going to just be maintaining everything manually and it's going to be a nightmare for you.

Same happens if I re-name a recorded file.

If you rename/edit a file, you cannot use it in Channels as a recorded item; in that case you need to remove it from Channels' database, and then add it back in as imported Local Content.

Ok, thanks for the reply...

So what I essentially want to do is

Why can't Channels run a scan, know the file is not longer present (because the user moved it), and auto-trash the recording itself?

Similar to the OP, I watch all my movies and series in Emby, Channels is just for watching TV and setting stuff to record. Once a recording is done, MCEBuddy grabs the recording file, removes the commercials, converts the file to an mp4, and moves it to my Emby Movie folder or TV Show folder (depending on type).

The above is all done automatically on my server.

It's annoying to then have to manually go into Channels and trash the recording. Channels should do it automatically by scanning the DVR directory and knowing the original file is no longer present.

Channels should do it automatically by scanning the DVR directory and knowing the original file is no longer present.

How often should it scan? I believe this is already being done but not sure how many times a day it does so.

There is an endpoint that you can use as well: dvr/pruner/deleted

Because what if your hard drive was just temporarily unavailable? It would wipe out your entire library.

What you are doing in your workflow is 100% outside the bounds of what Channels DVR Server does. We're all for you doing whatever you want, but the software is designed for its own domain.

In your script, just call CURL -X POST /dvr/pruner/deleted, and it will do exactly what you want. This is how we make things available.

maddox gave you the command why not just add a post script to MCEBUDDY to run after successful completion of the conversion. MCEBUDDY has the capability do do what you want.

I didn't realize the CURL command existed, will definitely add to MCEBuddy, thanks!

Okay looking for some help on implementing the CURL -X POST or PUT command.

Background: Channels runs on docker on my OpenMediaVault (OMV) NAS (installed on a x86-64 system). MCEBuddy runs on a separate NUC that pulls from the SMB share where Channels records to and then moves it to a different directory on the same SMB share for Emby's movie and/or TV directory.

I've recorded a few shows, MCEBuddy saw them, converted them to mp4, deleted the original file, and saved the new mp4 to a the new location. As discussed earlier in this thread, however, Channels still shows the recorded TV shows in its DVR library.

So on the OMV machine I've saved a script file in the /usr/sbin directory named "trashdvr.sh" with the following code:

Here is the setup in OMV's GUI: 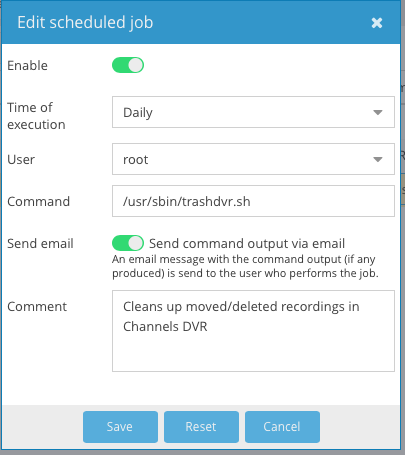 However, when I run the script I get "CURL: No such file or directory"

However, if you look in the directory on NAS where Channels appdata is stored:

You need lowercase curl not CURL