So, I realize this is a bit more of a complicated scenario but it's odd and I can't seem to sort it with "Fix Incorrect Match".

I have a separate folder for The New Batman Adventures/Season 01 and then all episodes in that one folder as that is the DVD order or absolute order. It isn't the aired order. But since I ripped it from the Bluray disc, I keep it in the order from those discs.

Both Plex and Emby read them fine.

For some reason Channels puts both these series in one listing and adds all of The New Batman Adventures episodes into the Batman: The Animated Series as Season 01 and renames each of those episodes as duplicates of each episode.

I hope that makes sense. Notice in the attached image the folder listed to the right.

If I select fix incorrect match on the episode it doesn't give me anything to select.

TV series are only matched with Gracenote. Other services may use other databases.

I am aware of that.

So if you look at "The New Batman Adventures" on Zap2It (which uses the same Gracenote data)...

Watch full episodes at Zap2it.com and find where and when to watch episode on your local broadcast, cable and satellite TV channels. 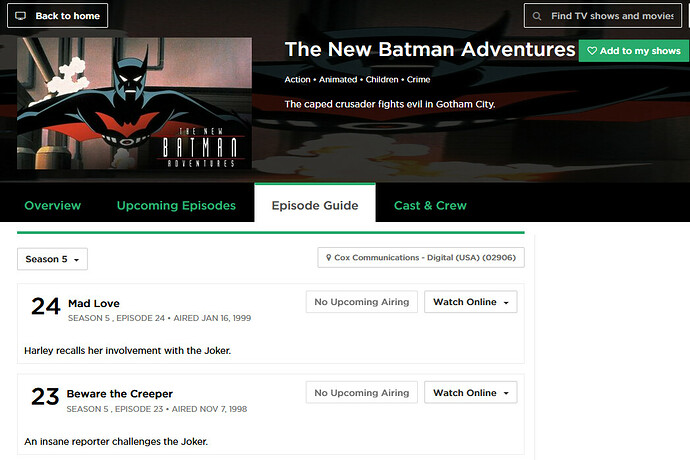 ... you can see that Gracenote considers this to be "Season 5", not "Season 1". Further, according to Wikipedia, the show is a "continuation of the 1990s Batman: The Animated Series", so that might be why they are getting mixed (the engine thinks it is the same show). You can even see this if you search in "Fix Incorrect Match": 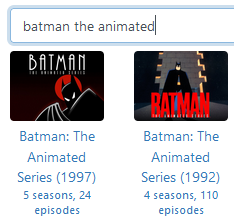 Therefore, the first thing you need to do is change everything in "The New Batman Adventures" to be "S05" instead of "S01" and Purge Deleted. Next, you will want make sure you are using the correct match even for "Batman: The Animated Series". I can see in your screen shot that the episode names are not aligning and that you don't have the same number of seasons as the Zap2It data. Use Zap2It to rename and re-order all of that. By the way, you will want to take these all out of the directory Channels scans to fix first and do that purge, otherwise there will be a mass of messed up data in there. Once you have made all those corrections, then add it back in.

Finally, once all of that is done and you re-import, if they are together at least all of "New" will be in "Season 5". If you want to try and separate them after that, select all of those episodes and then try "Fix Incorrect Show": 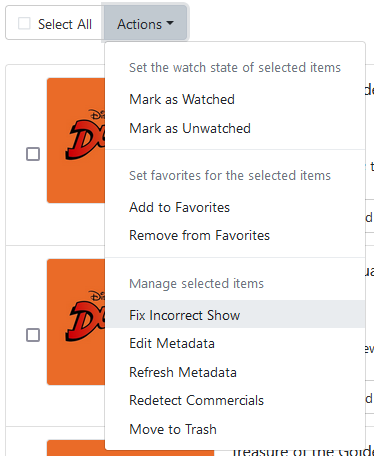 It might be the other way around, though. Judging by the incorrect match test from above, it looks like everything got dumped into the "The New Batman Adventures" one with 5 seasons, 138 episodes.

If all else fails or is not in the order/location you want them, you can always manually edit the metadata. Good luck!

Wow, thank you for taking so much time and effort to do such a thorough search and explanation on this. I did look at zap2it last night knowing they use Gracenote data as well but I didn't catch on in that much detail what was happening.

It looks like it's going to be quite a bit of work, I see that I can rename them to conform with Gracenote since Emby and Plex only use TVDB or TMDB for data but at least in those two apps I can force them to order the seasons by Absolute or Aired Date and they will get the correct lineup from either of those two services.

Although, I notice that TVDB isn't exactly in alignment with either TMDB or Gracenote with the aired date lineup on one of the shows.

Thanks again for taking your time on this.

Yeah, when I converted from Plex and also when I started creating Stream Links I found and continue to find a lot of issues like this. Unfortunately, there is not always agreement between major metadata sources, much to my chagrin. Been looking for ways to make this easier for a long time, and still am patiently waiting for @tmm1 to fulful this dream...

I'm looking into this to see how we can expose this information in the DVR web UI so you don't have to rely on other sites.

Yes, fortunately that is the 1st oddball series I have had so far, but I have many more shows I will probably be obtaining in the future.

I agree, the major metadata providers do have some divergent listing sometimes. I do feel Gracenote is the least flexible. If we had more options for shows like we do movies it would make it easier. I think it would have to be Gracenote as the default and optionally manually change it and use another provider for the few oddballs.

So, after manually changing everything, I am now left with Batman: The Animated Series as having 5 seasons but at least all the episodes are correctly labeled and placed. I would prefer to have the 2 shows completely separate, but I can deal with it like this.