PiP on IOS 15 Not working

Since moving to IOS 15, PiP no longer working for me.

I’ve just been informed of the following. Thank you Aman.

To use PiP on iOS 15, you would need to open the Channels app settings and change Settings > Playback > Advanced > Video Decoder: Experimental

Thanks for posting this answer. iOS 15 has been out for a long time. I’m surprised the support documentation doesn’t cover this. 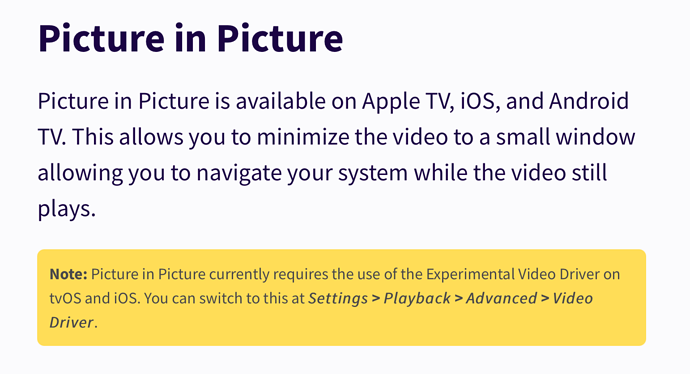 I know this seems like a nag, but it's def. a disconnect between experimental being "we're not sure what this does" and "you need this to enable a core product function."

It would be helpful to have a status of the various driver statuses on the clients. I'm thinking something like: Prod version: Video Driver: Experimental brings HDR playback Test Version: Video Driver: Experimental fixes AppleTV's stupid lack of HLG (one can dream...) This could go in the forum, FAQ, etc, but it really should be in one place, seeing as most client issues troubleshooting start with "what driver are you using?" Also - it would probably be useful is there was some level of…

In the latest TestFlight beta PIP will work regardless of the Video Driver selected.

Thank you for highlighting this as PIP used to work fine in the standard build/video decoder when it was originally released and announced.

Just a followup here that PiP on iPadOS is still partially broken.

Considering the following chain of events:

In a way this is a more extreme version (480i version) of the problem that I think occurs for every format, namely that closed captioning does not update under these same circumances -- captions are fine at full screen, fine at PiP with Channels foreground, frozen and unchanging with Channels in the background but PiP playing. It's like something is wrong with your compositing engine in a subtle way that only manifests when Channels is playing but is not the foreground app.