The Channels App is the bomb, I can't believe how sweet this app works... a must-have in my house but I use it to get the OTA channels. BUT, ONE THING I HATE, is I can't stand switching apps to find something to watch, so I tried PLEX - they have a serious app but the TV/DVR is not too good, but I believe Channels MUST open up and do the same as TV is only good for so much longer and getting weaker every month... the Streamers are proving it works (on demand) and TV as we know it is becoming the dinosaur...
Channels needs to allow and/or make deals with some plugins to make entertainment a one-stop app in Channels.You can buy Plex or make Channels better and one-up them.
Just Venting!
Steve

Sounds like a great idea however I doubt any major streaming company is going to allow not not using their native apps.

If you want plugins try Channels in Kodi. Kodi is infinatly customizable. Kodi will give you all the plex features.

Plex and Channels have 2 different intentions

Channels is a home DVR replacement. Designed to mimic a cable box in functionality. It does this damn good. They have added other features. But as a plex replacement its not so good. If devs try to implement all plex features, they would lose sight of OG mission. Then attention will move away from dvr.

Plex is software to organize all your illegally (we know you didnt buy all those movies) obtained content. They do that amazingly well. Plex branched into live to (not og mission) and it performs like crap. Why? Because that's a secondary priority.

I agree that tv as we know it is a dinosaur. The user base for something like ChannelsDVR has a limited use. Its for a older generation who grew up on cable. Kids see no point in cable/live tv.

That said. Though i would love plugins, i think it's a bad idea. The dev crew is very limated. I don't want them to take attention away from DVR.

But I do want pluto/stirr/samsung to not be custom channels and to just work like regular sources. But that won't happen officially. Those sources want you to use their app.

Sadly channels will only last as long as TVE. Which no one on the internet besides a few oddities like us use. So i doubt it will still be common in 5yrs. Uts all moving behind drm paywalls now.

End of my rant inspired by your rant.

Emby is far better than Plex, both for local media library and Live TV / DVR ability.
Their TV support is far more well baked and tested. Frequently worked on.
They do not support TVE natively though, why is a mystery.
But for use with any other physical tuner device, and/or IPTV/M3U tuner, Emby is the way to go.

Not referring to major streamer... Tubi, Pluto, Crackle, they're all good inside one app!

I doubt they want to share their services with others.

Well, with a little effort it wouldn't be hard to get a few on board... If you need somebody to do it, let me know.... these apps are looking for reliable business, and Plex has quite a few decent ones....and so do others. As we know, everybodys streaming and the market is flooded, but few do it as well as Plex (all-in-one)... so, how can Channels do "something" that offers more value? I think the consumer would prefer one single app than using 5, but if Channels can do it better and more affordable... why know.
Jus Sayin

Personally I think your idea of how easy such an endeavor would be is way off-base. But, you're free to rally for a feature you'd like to see. Just don't be surprised when you get shot down.

I don't think it's a matter of what channels can do but what they are allowed to do. Think of apple TV or Amazon. If there was a way to integrate everything into a single app than one of these mega companies would already be doing it offering their product as a one stop shop. Instead we show apple TV offering crackle app and hulu app and tubi app. None of these companies are going to want or allow their services to be baked into another program. I am positive what you are wanting can be done, but I don't think the company could run as a legit business. Sometimes it's not about what you can do but what you are allowed to do.

don't think it's a matter of what channels can do but what they are allowed to do. Think of apple TV or Amazon.

The Fire TV Live TV page is basically the same as the Android TV Live Channels app. To be present in that section, the app needs to provide linear TV and guide services through the Android TV Input Framework (TIF). The difference on Fire TV is that this is only available to apps that Amazon has specifically whitelisted.

However, what you are discussing is actually a system-level feature. What you are requesting, though, is an app-level feature in Channels, leveraging the system's support; I don't think that is possible.

My number one priority is to be able to assemble multiple sources under one app/interface. Channels does it via TVE. Live TV different api but I know it has access to the 'native' provider streams and not TVE (when TVE streams have a problem, I can still use the Fire Live TV).

EDIT: I also think that the providers are making a mistake in keeping their content tied so much to their individual apps. I know I would be more likely to try other providers if they would integrate into a common interface.

apple TV supports these as well but they are still independent stand alone apps. hulu, YT, sling, PHilo and others are not baked into one guide and viewing program. apple TV has the highlight bar thing on top. But that's like 4 shows or something like that. If you are saying amazon live TV is going to be a single application with all those services tied into to one I am very shocked. if they were able to manage thing there is no way I would believe these companies are allowing this free to amazon. I suspect if, which i don't think they are, this is being done, they are having to pay the streaming services for this ability. Which again, would come to size of the business. This might be possible in huge company like amazing or apple but no way is channels going to be able to get these big companies to allow integration without a cost. I'd love someone to show a snapshot of these multi steaming services being offered under one singular app vs being offered as a stand alone app.

Yes...that's what I am saying....downside is that they only pull a limited subset of the channels. 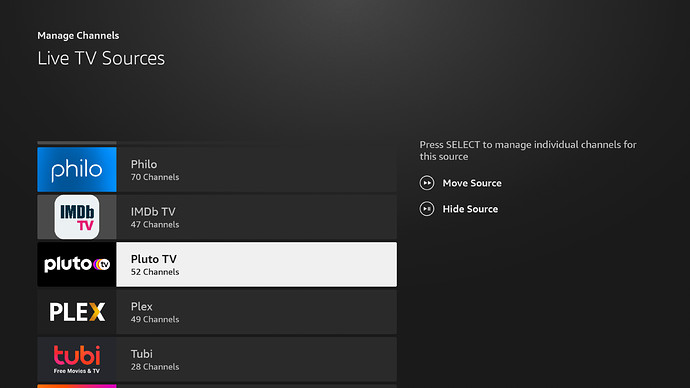 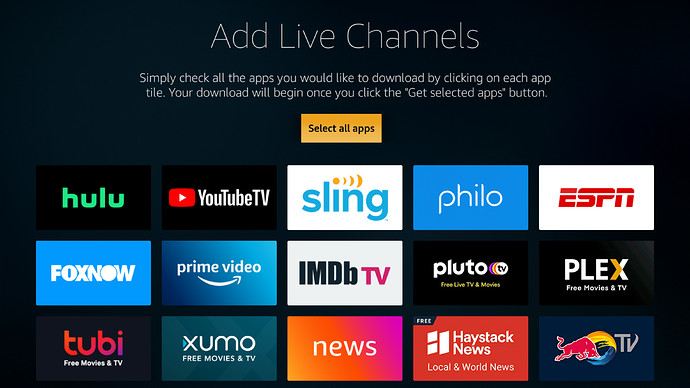 That doesn't looks like a single guide. that looks like a launcher showing you the different apps branded by their services. I don't believe they have a common live guide where it changes from one provider to another automatically while viewing avail channels. This looks like you click on philo, look at the channels, g go back, then click on pluto and look at live channels, and go back and click on tubi and look at live channels. How is this any different than what apple tv does? I can have all of those on my main apple app screen and open and close them the same as you can here. This just looks more like how this program manages the apps installed. But it is nice they tell you how many channels it has.

I don't believe they have a common live guide where it changes from one provider to another automatically while viewing avail channels.

Yes they do.....here's a guide capture showing Philo and IMdbTV together. You can also select favorites from each source and they can be sorted together into one guide. 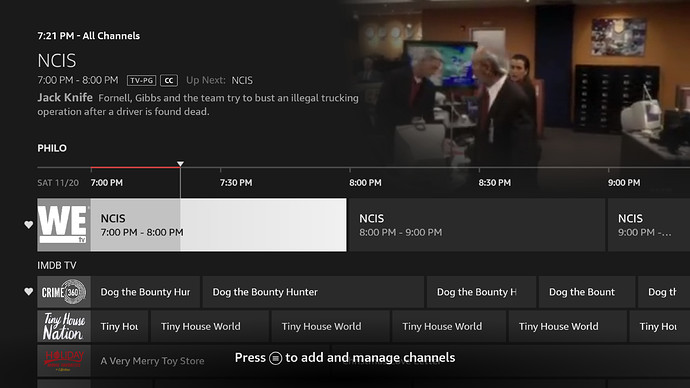 wow that is really nice. have you looked at the channels that are missing? You have deff convinced me this is a great idea. I know you can do sling and philo with channels.

Also, no DVR for other than their Recast OTA.

I think that's where the issue become. Agreements between the provider and the app company and I suspect they are not permitted to do what is being asked. So if additional steaming providers were added then it would end up being limited as well and most likely not provide the channels you are looking for.

The number one thing I am looking for is a TiVo replacement. I have been with CDVR for over a year now and I really like it. There are some thing that I don't particular like. I would prefer listings of shows and not these photographs of the shows. If I want to watch CBS News, just give me one line that says "CBS News." I don't need a color photo of the News Anchor on her set. I would prefer the TiVo straight listing.

But, above all, I want an "aggregator." That is what TiVo does. You put in your Passes and the system records the show. In TiVo's case, it will record the show, if possible, or add a link that you click and it takes you to the streaming service and plays that episode.

The new TiVo Stream 4K has the right idea but it doesn't have many of the streaming services and the only DVR function is that connection with Sling that costs money.

If CDVR could do more in the "aggregation" aspect and either record or bookmark programs/episodes, that would be my dream.