Is anyone using this provider for TV Everywhere authentication?
What TVE channels are you getting.

Moved to DirecTV Stream as an alternative to Fubo after losing A&E
On the Choice package and getting 156 channels - all the ones I expected and not missing any that I was expecting to receive appears pretty solid.

Looks interesting. They have packages at 4 different levels:

Add $10/month to the above packages if you want unlimited cloud DVR storage instead of the standard 20 hours. 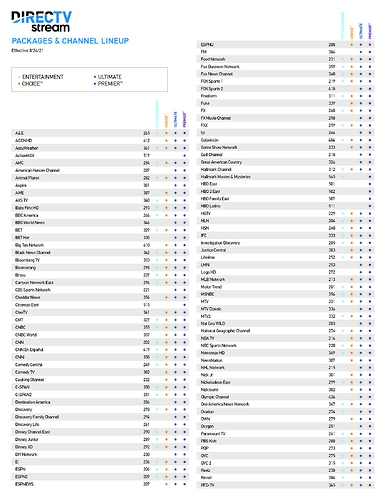 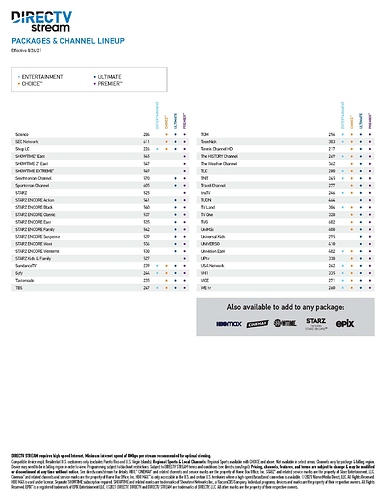 Can anyone with the "ultimate" package confirm that only (1) Hallmark channel is included?

Haven't heard that comment since Att tv now came out in 2016. From what I understand there in a Hallmark that's only on the base package

I'm with the Choice package - The channel lineup package shows Hallmark M&M is not available, but I receive it through TVE.

shows Hallmark M&M is not available, but I receive it through TVE

Usually, if you get one channel from a family of networks, you are able to get access to all of their networks through TVE. So while you may only get HMC through the DTV Stream app, you might get access to HMC, HMM, and HMD.

Hallmark Drama shows as "notAuthorized: 0033-The customer is not authorized for the content requested" Don't see it listed on the channel lineup so not sure if it's that its not provided at all by DirecTV Stream or not

Works for me with my Xfinity login.

Does Direct tv stream TVE offer the Warner channels like CNN and TNT? 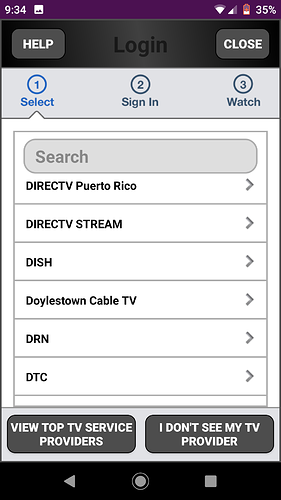 Yes they have the WM channels

In my market, Atlanta, GA. WGCL CBS 46, they don't offer CBS via TVE authentication. You have to use the paramount+ app. Been like this for at least 1.5 years. Don't think it will ever come. That does not bode well for my mother who is in the Albuquerque market and is unable to get her CBS affiliate on DTV Stream (She was able to get it with Fubo). May need to have her invest in a better antenna. Where I am at in Denver I am able to get the CBS affiliate via TVE.

DirecTV Stream isn't a provider on my Mac server. I'm using AT&T TV (since it seems to mostly work). I've been having problems with the ABC channel, KOMO (Seattle) since last week. It simply shows ABC with no guide data no matter what I do. So now I've lost CBS (KIRO, thanks to Locast shutting down and Seattle being known issue with DirecTV Stream and TVE) and ABC (KOMO) thanks to this problem. I have an HDHomeRun, but where we are it's pretty much useless (we're on the back side of a hill blocking pretty much everything). Actually, having made the change, it looks like I lost NBC (KING) as well.

Is there something (like geographic location) which is out of wack and causing these channels not to work. I am in the Seattle market, so I should be getting Seattle locals (other than the known issue with CBS/Kiro)

Note, I've deleted the source, and added it back (using AT&T TV), and re-downloaded the guide data, and rescanned, all to no avail. My Qnap server with an older DirectTV Now based setup, still works. I'd really like to get this working.

Is the guide data also missing in the web ui?

Are you running the latest prerelease version of the server on your Mac? There's been a lot of improvements in regards to TVE for local channels.

Learn, get started, and get help with Channels.

The pre-release version gave me back the ABC and NBC channels, complete with guide data, THANK YOU!!! Now if only we could get a Paramount adaptor, Locast to return, or some other way of getting the local CBS channel streaming (I'm not holding out hope for DirecTV Stream to sign an agreement) I'd be all set.

Sorry I should have answered this as well, yes the data was missing in the Web interface as well. The latest prerelease fixed the issue across all interfaces (after refreshing guide data).

For some reason I had to reauthorize Directv for TVE. I doing so I lost a number of channels - had 164 now get 153! Missing are the Hallmark channels they get watched by family members, get error 404. We are a bit frustrated.

You need to update to prerelease