I have my server running on an NVIDIA Shield TV and the DVR playback always seems to stall for 30 seconds. I checked everything. I know my QNAP TS-559 Pro+ is a little old but certainly not obsolete.

I submitted my diagnostics at the time of writing 12:30 AM

Please submit from the client after the playback issue

Just submitted. Also skip commercials button renders the same behavior. Hopefully you find something. Playback is slow not only when playing from your shield client, but also slow in all the clients running iOS as well.

Try downloading a recording from your dvr and see what speeds you get:

Seems pretty slow. Is the SHIELD DVR on WiFi or wired? It seems limited to 100mbps instead of gigabit.

Yup I see what you are saying and I am working on fixing that right now. I think one of the ethernet cables I was using was poor. I replaced it with another and the speed seems to have increased. I am also using a mesh network, while the nodes are wired, may contribute to the slowness. I am copying the fire from my QNAP, wired, to my desktop which is wireless. However, the Shield and the QNAP are both wired. Each are wired to a different nodes on the two nodes mesh network. But the link between the nodes is wired.

I can get up to 30MB/s now between my computer and the QNAP after replacing the cable. But the test from the Channels app is still returning bout 14MB/s

Which test are you referring to?

That is mbps and is equivalent to 175MB/s

That is simply testing the speed between the server and client, which are both the shield in this case so it's very fast.

The speed between the shield and the QNAP is the issue, or it could be the disk speeds on the QNAP itself.

Yes I am checking that as we speak. It's an old retired NAS that I brought back to life. It's actually running WESTERN DIGITAL Wd30efrx WD Red 3TB 5400rpm (intellipower) Sata-6gbps 64MB Buffer in Raid 5.

Not that I thought it would make a difference but I wired a computer and downloaded the file. I got just about the same speed. Average 25MB/s Max 30MB/s

I am out of ideas.

Interestingly, 30MB/s is 240Mbps, which is roughly equivalent to what one would expect via a USB2 bus.

I'm not making any concrete claims. But, it is a rather interesting parallel. (Also, using a mesh system introduces a slew of bandwidth and latency issues. It doesn't matter if both devices are wired into a node and not wireless themselves, as there is still a wireless link between them. Just another data point to consider.)

You are absolutely correct. I expected latency yes but at this point I am baffled at the fact that I can't get the playback to be instant.

My mesh network is weird. The extender is wired to the router. I wire everything except mobile devices.

Personally, I don't know of any good "mesh" solutions. If all of your "extenders" are wired, why use a mesh network, instead of multiple independent APs. That way, they can all operate on separate channels without interference, and give you maximum bandwidth. 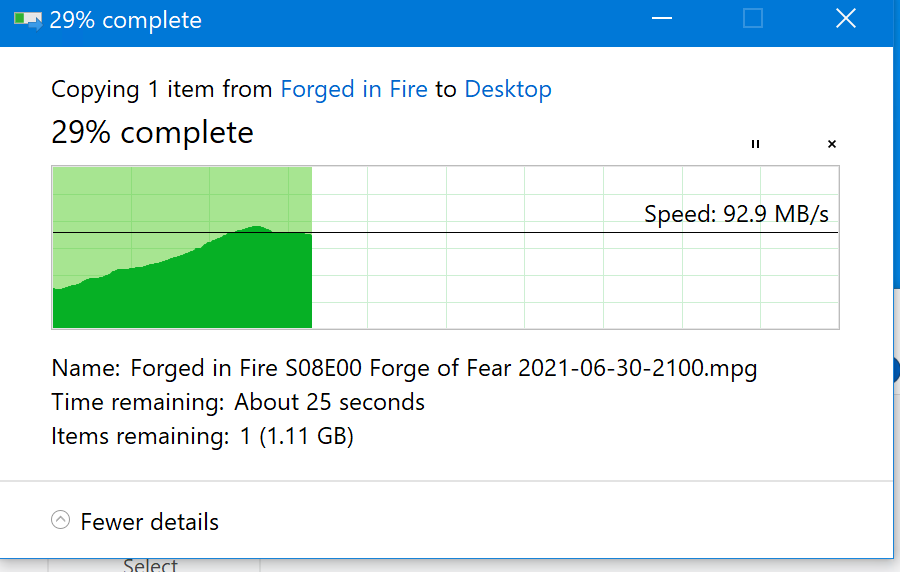 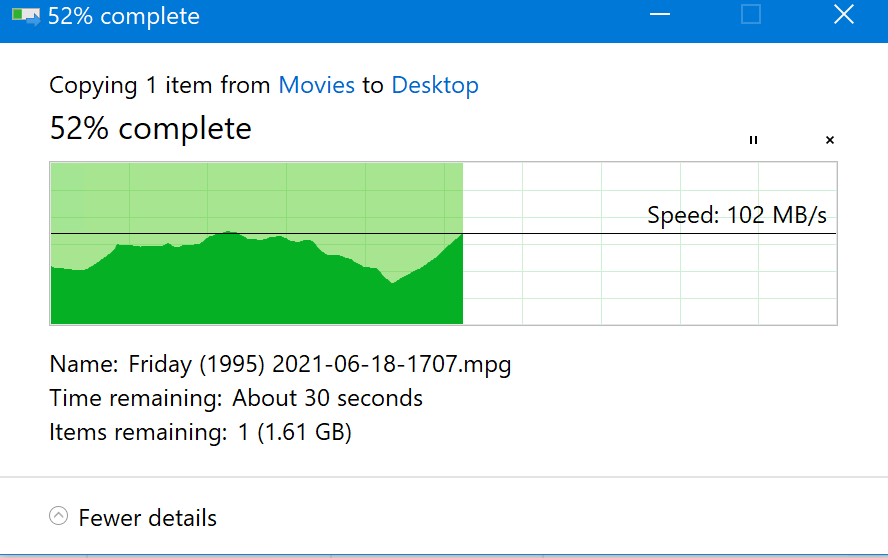 Without deviating too much. I do get maximum bandwidth. I don't think I've ever had any issues with bandwidth. My apartment is a new construction with patched panels available for use.This is not my house so I am not going to do my own runs to add APs. For that reason I use the next best thing. A mesh network. The router sit in the closet with the 2.4 and 5GHz set to a really low frequency and I have the second node in the living area at a high frequency. All the mobile devices connect to it and they get maximum speed in all the rooms. I run my Plex server remotely and I can direct play 4K with ATMOS contents on all my devices without buffering. I found out my TV onboard ethernet port was slower than the wireless adapter. When I do a speed test from my TV app, I get the maximum subscribed throughput.

Honestly the only issue I ever had with this setup is when I originally set them up at my parents. I got the Orbi mesh to extend the WIFI range over there and it didn't work out since the router couldn't handle gigabit speed.

Going back to the screenshots I sent. Clearly the QNAP is not the bottleneck. Maybe the Shield is. https://www.nvidia.com/en-us/geforce/forums/shield-tv/9/239929/slow-smb-over-ethernet-alternative/

I am going to try using WIFI and report back.

The router sit in the closet with the 2.4 and 5GHz set to a really low frequency and I have the second node in the living area at a high frequency.

Instead of just doing a high/low thing, have you actually run a frequency scan to see which frequencies are the least congested. And also, changed perhaps the width of your APs, along with the broadcast power? Those are a few things that might strengthen your wireless network.

I hear you but I don't have a WIFI problem. I think I have an SMB problem. @tmm1 I am out of ideas. If you can think of anything I am all ears.