The new remote features backlit keys, dedicated channel up and down buttons, as well as guide button for use with Spectrum’s "Spectrum TV" app. And a Siri button. 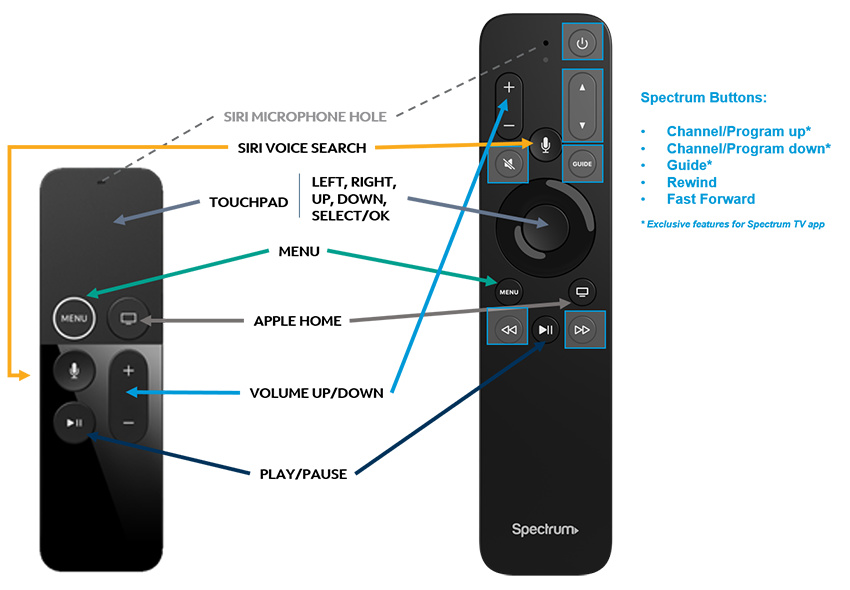 I'd pay $10 more if I could order online and not have to call them.

Never mind. It's not worth their crap

We have spectrum business at our office. I called them to order one and they have to have a tech deliver it. Im supposed to be getting it monday- but I have a feeling they are just going to bring a regular (non apple tv) version... I asked for 2 but they wouldnt allow it. They didnt tell me there was any charge.
Also I did a residental spectrum chat originally and they said its free but they couldnt let me order it threw chat since I had a business account.
This would be nice to have for when my parents or in laws are trying to watch tv and Im not home to explain how to use channels dvr...

I just got one today. I am a residential customer and it cost $12 as advertised. I’ve only used it for a few minutes but it is nice. The only issue I see is that the page up/down surfs all channels rather than the collection I am in. Based on initial experience I’ll try to order a few more.

@tmm1 is the channel up/down something that can be addressed. I think it should be restricted to surfing the current guide selection ie; favorites, HD channels, collection, etc.

The only issue I see is that the page up/down surfs all channels rather than the collection I am in.

Oops, I missed that setting. I guess since I didn’t have a remote to use it with til now. Unless I come back otherwise I expect this will fix it.

How do you swipe away apps?

BTW, the Channel Surfing setting did fix the pg up/down.

Still only a few minutes using it, but it's a nice remote especially for the price of just $12.

I've had a chance to spend some more time with this remote today.

Generally, a nice remote. It feels good and I don't miss the accidental mishaps of the touch pad.

However, a couple of things to note...

In general, the Guide button doesn't do anything in any App. (ie; Channels, Disney+, HBOMax) but this is not too surprising since this button seems to be specific to the Spectrum App according to the docs.

Within Channels the Navigation ring Up/Down buttons to not mimic the Swipe Up/Down of the Apple remote. So, you can't bring up the timeline or bring down the Quick Guide with the ring. It does work properly in the other Apps I mentioned previously.

The Fastforward/Rewind buttons do not work in Channels either. In the other mentioned apps they toggle the appropriate function until pressed again. So, really nice for moving forward or reverse over a longer period of time than just the typical seek times.

All other buttons seems to work appropriately. Having the mute button is very nice.

On the whole, I can't recommend this remote for Channels unless the developers can address the issues with the navigation ring at a minimum. The fast forward / rewind would be super cool if that can be done as well. @Maddox - can these two issues be fixed?

Up/Down not woking to get Quick Guide is odd. I would expect that to work as we already support that with IR remotes and others.

I'm a Spectrum customer for just Internet at my vacation house. I'm working on trying to find out if I can order this remote.

Once we have it, we should be able to figure things out. We most likely won't be able to identify the remote when in use, so things have to be normalized for ALL remotes. So we just gotta see what happens.

If anyone can get us one (me or @tmm1) it would be helpful.

How did you guys order it? Do you have to have a tech deliver it to your house? That seems like an insane waste of resources, lol.

As far as ordering, it seems like you can only do that by call them. The number I have is 833 267-6094. I did have to explain to my rep that the remote can be ordered without an ATV. He checked with a peer on how to do that and was able to do it without issue.

They actually just mail it to you like they would a self-install kit.

Here's an oddity that I just noticed...

In the Channels guide the pg up/down advances the guide a page. But, the Navigation ring up/down does a single line in the guide...

There is a setting for this inside the app.

Yes, that fixed the up/down on the ring. Weird that it was set to on as I don't have any of the second gen Siri remotes.

If anyone is ordering extras and the devs have gotten theirs, I wouldn't mind paying someone for one!

All buttons on this remote work with Channels EXCEPT for Guide and the FFW/RWD. And, an added bonus that I noticed last night - it is backlit.

My wife seems to like it too. So, I can recommend this.

@maddox, have you got one coming to you yet? If not PM me with details of how to get one to you. Having the Guide and FFW/RWD buttons work would be amazing.

I got 2 of them. I didnt realize you can only pair 1 remote to each device. The remote is decent but Im going to stick with the regular apple remote for now. Maybe Ill break this one out for my parents/in-laws. I did buy an extra one thats still un-opened.