Messages/screens/breaks of that sort come from the provider themselves, so there's nothing Channels can do about that.

Yes that's what I figured. I just wish there was a way to get the actual feed from the spectrum app into channels...not this joke of a tveverywhere feed. I kind of got channels just for this purpose and will probably have to dump it because of this single feed.

I just wish there was a way to get the actual feed from the spectrum app into channels...not this joke of a tveverywhere feed.

The "Spectrum" feed is their version of their IPTV cable feed, which is only available from their hardware or first-party apps.

The TVE feed is what is available on the networks' websites and and (usually) the apps.

If you're unhappy with the way that cable and carriage agreements work in the US, then you need to contact your congressional representatives, because without proper regulatory controls and oversight, this is what you get.

You might also want to contact the Tennis Channel support team directly on their website. They would be the ones to address any issues. It would probably be good to actually watch through their website to confirm the issue occurs there as well.

I just downloaded fitzytv on android tv. It looks they are able to get the spectrum original feeds as opposed to tv everywhere streams in their app and also allow cloud recording of those feeds for a fee. Any idea how they are accomplishing this and why channels couldn't do the same?

Any idea how they are accomplishing this and why channels couldn't do the same?

By reverse engineering the apps and by-passing checks that providers have implemented.

Fitzy is quite the grey-area app, and what they are doing skirts legality. (If it we're fully audited, I wouldn't be surprised to learn that they aren't just skirting the legality of accessing the streams they do, but they are operating beyond the law.)

Fitzy is hardly an example for what one wants to emulate. Channels could certainly do the same thing Fitzy does, but doing so may not be legal.

I’m guessing the grey area is gone. Fitzy is back on Amazon and allowed to use tv everywhere again.

yes. it recently tried it. it has no channels unless u add a tve provider.
i added my philo, but it is strange, there is more channels in there than what actually is in the Philo app.

With Spectrum he's just mimicking the channels on the app that are allowed away from home. No Warner or locals. Really not useful for me

i added my philo, but it is strange, there is more channels in there than what actually is in the Philo app

Experiences such as this only drive home the point that Fitzy most likely is not operating completely on the up-and-up.

While some users may be satisfied using dubious apps such as Fitzy, I'd prefer that my paid-for DVR service operates fully in the clear and not leave its future up to questionable legal outcomes with less-than forthcoming actions.

(If you doubt the dubious legality of Fitzy, go ahead and read all of Fitzy's public posts about their service and legal troubles ... it's a clear as mud how they are actually operating legally.)

I'd prefer to have a dvr that actually let's me record a functional channel. I'm not sure anymore how much of this issue is the stream and how much of it is channels itself. I'm also noticing now that often when commercials start too early on this channel the video will randomly skip 3ish minutes ahead on the time bar and the audio/video can get out of sync. The video can also just slow down when this happens. It seems like channels is having trouble with the transitions to commercials here even if there could also be something wrong with tennis channels feed. It almost seems like programmed commercial breaks that arent in the tveverywhere feed itself are randomly popping up and channels doesn't get the transition right. Idk I wish the developers would take a look at this and see how much if this is a channels problem and how much is a tennis channel problem.

If it's anything like Discovery Communications channels TVE streams, there are PTS (Presentation Time Stamp) erros in the stream when coming out of commercials. The PTS basically tells the player which frames of the audio/video to present at which time.

If you want to verify that's the case with Tennis channel, you can record something from it with Detect Commercials enabled on the DVR and examine the comskip log.
You'll see things like the following in the log;

WARNING: Complex timeline or errors in the recording!!!!
Results may be wrong, .ref input will be misaligned. .txt editing will produce wrong results
Use .edl output if possible

See my thread on this here.

Thanks for the response. If the same thing is happening with the tennis channel, is there basically no resolution other than tennis channel fixing the stream or should I raise this with channels support?

If the same thing is happening with the tennis channel, is there basically no resolution other than tennis channel fixing the stream or should I raise this with channels support?

If the problem is with the original stream, there's nothing the Channels devs can do. (Unless you consider the nuclear option that they took with Pop's malformed feed: remove the channel from Channels' list of supported TVE streams.) Essentially you can suffer through the poor stream from the Tennis channel, or just go without.

I guess it's unclear though how much of this is channels and how much of it is something being introduced by channels itself. The other poster dropped his issue because he can just record via cable, I can't do that. I'll send the devs and email and see what they have to say I guess.

When you record Tennis channel and look at the MTS entries in the log, what do they show?

This is from my most recent recording, does channels keep an archive of past logs somewhere? If so i can get more entries, but this is all i have for now since i rebooted my pc today.

does channels keep an archive of past logs somewhere

So, on my system, the DVR files are in /srv/channels, so a recording log would be:
/srv/channels/Logs/recording/4889/recording.log

(That's just an example, but hopefully it'll point you in the right direction.) 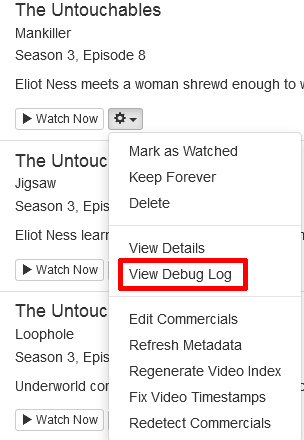 For MTS stats on previous recording, you need to look at the DVR log as explained here