In the latest Android beta we have included an option to enable our new experimental HDHomeRun network tuning system. This is using the same backend as our recent AppleTV and iPhone beta.

Why is this interesting?

In normal circumstances we expect it to behave the same as the old one, but the magic comes when things are going wrong. The new system will notify you on screen when your antenna reception or network is causing problems that show up as glitches when watching Live TV. 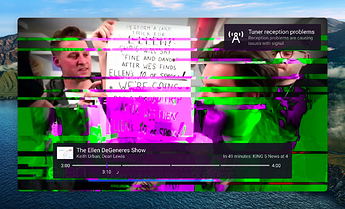 How do I enable it?

From Settings go to the "Debug" menu and enable "New HDHR Streaming".

What should I do if there are problems?

Please let us know below if you run into any problems and please submit diagnostic logs so we can look into it further.

@eric - I installed the beta but I can't find "Debug" anywhere on the settings page.

same here - I just updated and I can't find that setting anywhere.

Yo. This may be a bad build. I tried to watch a recording and it locked up my Shield. I'm talking about no way to get to the Home screen, no buttons will work. I have to unplug and replug in the power to get the Shield back to a responsive state. Playback error 13 did show once (i think that's the error code). I'll keep messing around and try to send diagnostics.

Sent diagnostics. Live TV works so far. Trying to play a recording locks up the Shield.

Choose a recording to watch. The small spinner in the lower left corner of the screen next to the time indicator starts to spin, slows down, disappears, reappears and the Channels app restarts itself.

After Channels goes through the setting up message, the Shield goes into a locked state and will not respond to any key presses. Unplug/replug gets the Shield going again.

When attempting to play a recording - Playback error (-13) is the message. You only see the error if it slow to crash. I had indicated 13 in a prior post.

I installed the beta but I can't find "Debug" anywhere on the settings page.

Sorry about that. This was an oversight in that build where it did not expose the "Debug" menu to beta builds. A new build is happening now to fix that.

Sent diagnostics. Live TV works so far. Trying to play a recording locks up the Shield.

Choose a recording to watch. The small spinner in the lower left corner of the screen next to the time indicator starts to spin, slows down, disappears, reappears and the Channels app restarts itself.

Very interesting. We didn't change behavior regarding recordings, but I'll check out those diagnostic logs to see what is up.

@eric - I sent several diagnostics, but I have to reboot the Shield, so the logs are a few minutes later than the error. I was watching recordings prior to the update without issue.

I got the same thing uninstalled went back to Release Version... On FireTV.

Thank you guys for the reports. I'm working on reproducing this myself.

I've figured out what the issue with playing recordings is and am working on a new build to fix it.

Build 204160149 has been posted that fixes the crash while trying to play recordings.

Not seeing any kind of banner that states signal issues when OTA breaks up.

Late night, ION tends to have issues....also, i can switch on a small table fan several times and this action cause OTA channels to break up/ signal to drop cut to near 0% (no idea why) so I can trigger "signal issues" manually. Again, don't see anything pop up.

EDIT: ok. so. i got it to do it on a SD channel that has strong signal normally ~95%. I trigger the fan off on, and i got a banner upper right almost right away, but i won't do it on ION that normally has mid to weak signal ~58% and is in HD.

Are you watching at Original Quality from home? After you've caused the signal issues can you please submit diagnostic logs from the app? I'd like to see what's going on.

Ok, so this seems to be way over sensitive for some SD channels, and not functional for some HD channels.

Strong SD channel and the banner pops up even when the HDHR stats from the HDHR software shows still strong signal, or there is a very minor glitch in the picture.

It even is popping up when i first tune a SD channel, but not at all on others when i breaks up.

Not sure how you are triggering this banner....signal strength, signal Quality, or Symbol Quality. Or any of them.

Some ota stations, my fan on/of switch causes all 3 metrics to cut, where as some, only the Symbol quality cuts and signal stays near 100%.

(thanks to this new feature, and by chance of me turning my tabletop fan of, then seeing the channel i was watching break up each time i did that...now I know what may be causing random breakups...gotta post about this in the one users thread)

Not sure how you are triggering this banner....signal strength, signal Quality, or Symbol Quality. Or any of them.

Some ota stations, my fan on/of switch causes all 3 metrics to cut, where as some, only the Symbol quality cuts and signal stays near 100%.

We poll the HDHR every 5 seconds. If the Symbol Quality is less than 100% or the Timestamp Error Counter is incremented we mark this sample as "bad". We run that thought an Exponentially Weighted Moving Average that is intended to approximate the average of the past 5 samples.

The thresholds I've used for the parameters of when to display the notification were guesses for me, so it may require some adjusting to make it not annoying but pop up when it would make sense.

I'm adding some additional diagnostics that should help me tune the values. A new build with the improved diagnostics should be out in 20 minutes or so.

Might i suggest making it ignore and not pop up for the first few seconds or so that the channel is first tuned?

for me, Antenna TV, 5.4 (569.000 MHz), nearly every time i tune to the channel(or any in the frequency range), the Signal Issues banner appear right away, even though there appear to be no issues.

Also, that same channel, after min or 2, i do the fan trick, and the channel breaks up and the buffer pauses etc, done it for a good 5 to 7 secs straight of bad stream, the signal issues pop up never comes up.

This behavior is not consistent with other SD channels though.
Sometimes it will come up when the signal breaks up, other times it won't.

Is there some sort of programmed time out/wait period for your trigger of this, other than the 5 sec HDHR poll?
I have triggered longer than 5 sec severe signal issue, and it does not always detect it and pop up when watching the live stream continually, without changing channels. It so bad, the stream pauses, buffer jumps back and forth, and the stream trys to recover and play normal again, but it stuck in slow mo like effect, and i have to close the stream and re-tune. The signal pop didn't come up. I noticed Symbol Quality was 0%, but the other 2 metric 99%. if that helps at all.

So, to summarize, this feature shows wildly inconsistent results among my OTA channels.