Close Captions on certain Shows are terrible here s a snapshot from Chicago PD. It appears it is not clearing the previous closed captions displayed. 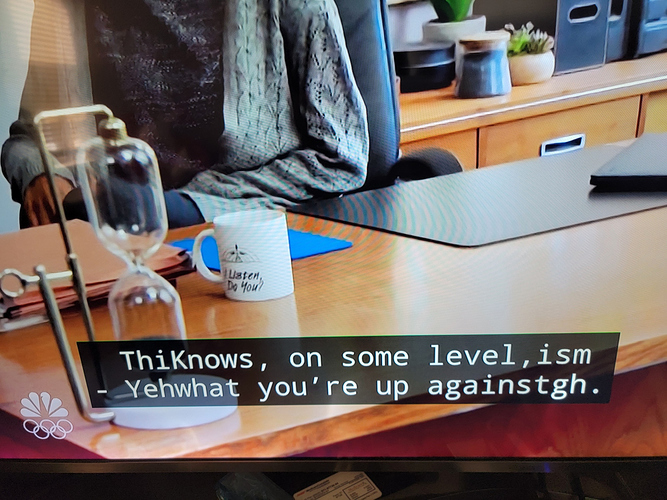 Here is the same scene on EMBY ... 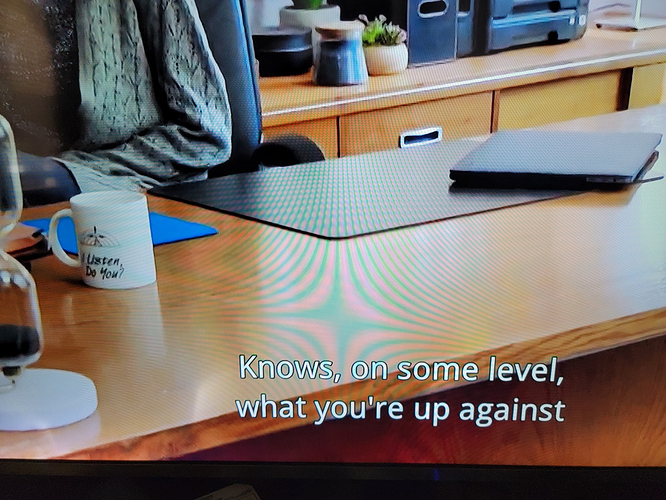 Same issue happing the last few days with my hd home run prime.. hopefully it will be fixed soon

Having the same issue on Apple TV and Phone apps. Using HD Homerun tuner and TVEverywhere for Philo and YouTubeTV. Same jumbled issues on all. Samsung TV direct to antenna is OK.

Saw the same thing happen to one show recently. Source was an HDHR Prime, client was the Fire TV app. Not sure if it's happening to all shows.

Mine was a mess on Amazon Prime last night. IT'S RUSSIA!

Can you email support with the comskip.log for that recording?

Having the same issue on Apple TV and Phone apps.

Could you go to the App Store, search for Channels, install v4.5.3 and see if the issue still occurs?

I'm not seeing this on my recordings, so I either need a short recording sample or a TVE channel/time I can record where its happening.

Okay I found one on TBS

Same issue here. Using an Apple TV 4K. The CC problem is on live shows as well as recordings. Thanks for your awesome support team.

I've had Closed Captioning issues with live streams on Apple TV for a few years across different apps (Direct TV Now, Hulu Live). Once tvOS release breaks it, the next one fixes it again.

I am having this trouble also, and have done a considerable amount of troubleshooting.

Channels DVR is running on a Synology 920+, and is getting its feed from YouTubeTV. ComSkip is set to 1 thread. I watch the shows recorded by Channels DVR on a Sony Bravia TV connected by Ethernet. All devices on the network, including the Synology, the TV and my PCs are connected to my router by Ethernet, no WiFi involved at all. Internet is 50/50 fiber optic. I don't use any HDHomeRun tuners because YouTubeTV is bringing me all I need, including local channels with Channels DVR's experimental local channels option.

The scrambling does not happen when watching YouTubeTV directly on my TV, whether live or YouTubeTV's DVR "recordings". I have yet to catch YouTubeTV messing up the captioning; it's perfect there.

The scrambling happens to random episodes on random channels on the Channels DVR app on my TV; one episode of a show might have it while the next episode does not. I've seen it happen on NBC, AMC, HGTV, and many other channels. I have seen it happen on Channels DVR's live mode as well as its recordings. It is happening a lot; if I had to guess, at least half of the shows I've checked have scrambled CC.

When I watch a recording that had scrambled CC on my TV by using the web player on my PC instead, the scrambling does not happen. I am talking about watching the same file from the DVR on my TV or my PC - the CC is scrambled on the TV, and not on the PC. One example I have is The Blacklist Season 8, Episode 16, which aired on Friday May 7th. I have not deleted that episode, if someone needs it for analysis.

As I write this, I am watching an episode of HomeTown on HGTV, live on both the TV with the Channels DVR app and on my PC using the webplayer; the CC is scrambled on the TV but not on the web player. I hope this makes it clear where the problem is.

Edit: the beta that tmm1 mentions below solved this problem completely.

New beta is uploading for both apple and android now with a fix.

Great I tested on recordings I was having problems and they are perfect.

I installed the beta, and all of the recordings in which I'd found scrambled CC are now fixed.

Thank you very much for solving this!

Disregard was able to figure it out..thank you for the quick update

Does that include Fire TV? I installed Beta 105.19.123 and it seems to have done the trick. I was also having trouble getting subtitles to come on and stay on, but I think that's fixed too.