I can't find an answer to this problem in the support forums. I recorded a series of episodes using Playon Cloud and had them transferred to Channels DVR. Most of the recordings are correctly matched to their listing in the Library. However, some episodes of the series do not match the listing in the library. The content is different from that summarized in the library listing. How do I correct this?

Strangely, the listing in the library seems to be correct in that it is the series and episode that I wanted to record in Playon Cloud. However, the content that is associated with that library listing is incorrect. Please let me know how I can correct this problem.

It sounds like maybe PlayOn recorded the wrong thing?

Does it match inside the PlayOn app?

You may need to contact their support and re-record those shows?

Hi Aman. I contacted PlayOn support and they gave me some credits to re-download some of the episodes. All of the re-downloaded episodes are correctly matched to the name of the .mp4 file and they all correctly downloaded automatically to my Channels server running on a Synology DS218+ NAS. However, when I use the Channels App on a Fire TV stick to view the episodes the content is not correctly matched to the name of the episode displayed on the TV. So, it seems that PlayOn recorded the correct episodes but they are not being displayed correctly in the Channels App. Please let me know if you have any suggestion for how to fix this problem. If you have further questions I would be happy to help troubleshoot this problem.

Can you try clicking Fix Incorrect Match on the web UI to search for the correct episode title that matches the recorded content.

I tried Fix Incorrect Match on the web UI. It works for some episodes but not others. In fact, I only got it to work for one episode. I tried three other episodes but it could not find the correct match even though I know it was in the library.

I know the correct episodes are in the file directory channels>PlayOn>TV>Nova. Is it possible to just delete the incorrect files through the Synology file directory or do I have to go through the web UI? At this point I have multiple files for each episode in the file directory. The first copy was originally written by PlayOn a couple of weeks ago when I first recorded the episode. The second copy was written by PlayOn when I re-downloaded the episodes yesterday. And now I've tried to Fix Incorrect Match through the web UI which in some cases has made a third copy of an episode. Is there some way I can just delete all the files and copy in the correct files using the Synology file manager? 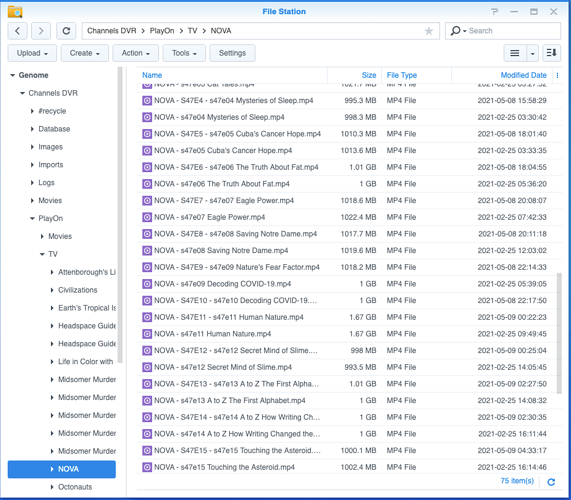 Here is an example of how the listings look in the web UI dvd library:

For some reason that screenshot did not upload the same as the previous screenshot. Please let me know if you didn't get it.

In the previous post there were three episodes with the same title. The first and last episode were created from the first and second download of the episode from PlayOn. The middle episode was created after I used Fix Incorrect Match on one of the copies of a completely different episode named Touching the Asteroid. See the screenshot below of the remaining entry for that episode.

I was unable to correct the match on the remaining episode of Touching the Asteroid using the web UI because it did not find the correct match.

If you enter "A to Z" in the fix match window does it find any results?

Your PlayOn download filenames are using the correct (per PBS) Season and Episode numbers, but when Channels imports them, it uses Gracenote guide data which numbers the episodes differently.

tmm1 and chDVRuser: Thank you for pointing to the fix. Searching for "A to Z" in the fix match window enabled it to find the correct episode. I had to go through all 20 episodes to get things matched up correctly. Is Channels going to provide a fix for this in the future? It's kind of tedious to have to "fix match" for every episode downloaded from PlayOn.

Thanks again for troubleshooting and explaining.

it uses Gracenote guide data which numbers the episodes differently

Gracenote is definitely great for guide data (far superior to Xperi/Rovi/TiVO), but there are a lot of problems and disagreements for episode orders, especially for anything from steaming. I ran into this same issue when dealing with setting up Stream Links:

Not sure if this would violate your license with Gracenotes, but would it be possible to open up a search into the TV metadata so we can see what order/season they are listing episodes? Trying to get something like Hulu Stream Links to agree with Channels -> Zap2It -> Wikipeida -> TVDB has been a massive headache. I don't mind (that much) creating my own Stream Links, but when I have to redo them because of a metadata episode order/season disagreement, it it a massive pain. Take for instance so…

I'm looking into this to see how we can expose this information in the DVR web UI so you don't have to rely on other sites.

@dom, when this comes along, it will probably help with the matching, even if it will be a manual correct. Not sure if I have a better solution to suggest in order to avoid that.