Just wondering if the developers have any plans for how they're going to handle iOS apps on the new M1 Macs - from the sounds of things, all iOS apps could be available but that developers have the ability to "opt out". (Finger's-crossed you guys don't opt-out, but I'll understand it if it's a user-interface issue of a non-touchscreen.)

Our iOS apps will not be available until we've had time to test them.

Well if you need any beta testers... sat here with an M1 Macbook Air..

OK I just tried it and it's kind of hilarious. It works great. I mean, it's an iPad app on macOS, but it works. The window is resizable, and the app goes full screen for video playback. There's a ton of weird wonkiness, but no worse than any other iOS app running on macOS right now. So it seems fair to release it.

I just released the apps to the App Store. I don't know how long it takes for them to show up on the store.

yeah I installed it the day I got the M1. Trust me it works better than most iPa installs

Looks like it's live on the Mac App Store now. It works really well! I haven't noticed any serious functionality issues at all... if someone had told me that this was a beta of a Mac app, and not just the iPad binary running on a Mac, then I probably would believe them. If you have an M1 Mac then you should definitely give it a try.

Tried it; love it!

it even has context menus (!!) 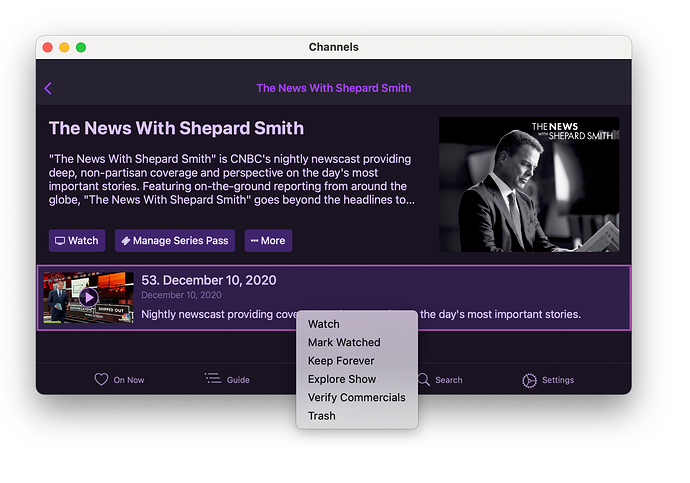 Overall, the app is slick on my M1 Mini. I prefer it to the browser since my NAS server has barely enough power for real-time transcoding. The window resizing is unexpected, but mostly works. I might have found an OS-level bug related to it. I have two displays hooked up, and I've noticed that while the windows resizes on either, the video only follows the size of the window if it's on the primary display. On the secondary display, the video stays at its native resolution, and just crops to the window, or has borders on the right and bottom. The Secondary display is HDMI on the mini. The Primary is an HDMI port on a thunderbolt 2 dock (on thunderbolt3 via apple adaptor).

Edit: Looking at it closer, the UI elements (buttons and play bar at top, program name and icon on the bottom) are obscured by the video. if the window is larger than the video, you can interact with elements you can see. but elements you can't see (which is all of them if the window is smaller than the video), it doesn't seem like it can be interacted with. My suspicion is that the video layer/polygon (visually accelerated video playback destination) changes depending upon the screen, and not automatically hooked up to size change and layering callbacks (stays default size, and always top-most in window). could be an OS or an app-level problem, but unexpected because iOS devices don't usually have more than one screen in this way.

It looks like system media playback keys work too...

The really neat thing is that this all works even when Channels is not the foreground app.

Also, Siri works for things like "go back 15 seconds".

We are loving the Channels app on our M1 Macbook Air! So much better than the browser viewing experience (less stuttering & commercial skip support). One issue we noted was that the Mac goes to sleep while videos are playing in the app. We’re working around the issue by installing “Jolt of Caffeine (https://apps.apple.com/us/app/jolt-of-caffeine/id1437130425?mt=12)” and disabling sleep while watching videos on Channels. Not sure if this is an Apple bug or something the Channels team can address, but mostly wanted to say ‘Thank You’ for making the app available so quickly on M1 Macs!

Yep came here to report that my Mac is sleeping while watching videos through the Channels app too, even full screen. Thanks for the work around idea but hope this can me remedied soon!

Until macOS responds to iOS apps turning off the idle timer, it's gonna be stuck this way.

Amphetamine can be configured to keep your Mac awake while a specified app is running.

I haven't tried using it for this myself but it might be worth a shot!

(Edit: D'oh, just realized that Jolt of Caffeine was suggested above to do the same thing too... so maybe try that as well!)

it'd be nice have a feature to keep the window on top of other apps. I am also finding that using an airplay 2 speaker (HomePod mini) causes a significant delay. Other audio on the Mac works in sync. I have changed the video drive to experimental but it hasn't changed the result

This is an iOS app running on macOS, not a MacOS app with APIs that we can take advantage of. It works like it works and that’s all we can do.

The iOS app is written for iOS. How it works on macOS is 100% up to Apple.

Just watched a 2hr show on my M1 MBP while on battery. Loved how the arrow keys jumped forward and backward just like on the Apple TV, except way snappier on the Mac which made it a real pleasure to skip commercials before comskip had run.

Very pleasant experience using this app on MacOS. I too experienced my MBP going to sleep during playback, but I adjusted settings to prevent. I’ll try the jolt of caffeine app. Also slightly annoying that the mouse pointer doesn’t disappear in full screen. Anyone have an app recommendation to address that similar to jolt of caffeine?

I’m very excited for Apple to continue improving iOS app experience on MacOS and open up more ways for developers to take advantage of this.

Update on my secondary monitor issue (video stream fixed size, cropped in window, and rendered over any playback controls). With PIP added in the latest version, PIP works perfectly on either display. And if I tell the video to return to the window, regardless of which screen the window is on, it will display in the window properly (scaled to the window, and controls displayed in front of the video). If I move the window to the other display and back, the problem returns. It also doesn't matter which screen the PIP comes from. So the bug is still there, but PIP works great, and the transition from PIP to window fixes the canvas attributes. I haven't tried this with the 11.2 beta, but the fix is probably on Apple to do, unless the iOS Channels app was made into a hybrid iOS/Mac app to directly target Mac functionality and APIs.

Thanks for the great app! Cheers!