Why it is very simple at the moment if you chooses to upgrade to DMS7 you have the option to run ChannlesDVR on a docker .. or simply wait until channelsdvr comes out with a compatible DMS 7 SPK ... what is so scary about that ? Sometimes on these threads there is a lot of panic or exaggeration.

The Pi4 is an inexpensive, dedicated unit that is maintained by Channels with auto updates etc. Set and forget. I notice no difference between using it on the Pi4 vs my Synology (I don't do out of home streaming). Not that I'm above updating and tinkering with my NAS, that's kinda fun. I just don't ever have to think about it with the Pi4.

I have it on a NAS and do not think about either even in the event of a drive failure ...

Do RPi's still have the problem of self-destructing after ungraceful shutdowns. E.g.: Power failures?

Fwiw, I run Channels natively on my 918+ and blindly updated to DSM 7.0. No problems so far.

Synology states that will work if it's already installed. Just that if you had to reinstall it will fail. I assume with some future DSM update they will disable the current version Channels DVR packaqe. https://kb.synology.com/en-us/DSM/tutorial/supported_third_party_packages_beta I didn't want to wait either. Both my NAS's updated to DSM 7.0 no problems. Running Channels in Docker on both of them.

I was going to avoid this release for longer and even had the update blocked in my Pi-Hole. But its a long weekend and there are no fireworks in Baltimore. So it seemed like a good time to play with it. I took the blocks off my Pi-Hole, removed incompatible packages and installed DSM 7. And was quite surprised.

I have numerous shell configurations for nginx, reverse-proxies for various web-sites, scripted auto updates for a multitude of lets-encrypt certificates, and other custom configurations. Often, these get wrecked and need to be setup again after a major DSM update. But that was not the case this time. Everything is working. Including Channels-DVR. I have docker on here, but haven't been running it on the NAS recently. I prefer leaving Docker apps to run on my Pi to keep load down on the Synology. So I'm glad the native Channels install still works.

It should be said that users should never need to reinstall the Channels DVR package. All the actual application updates are done through the app itself, not through package manager.

Anyway, I notice a performance improvement running Channels on my Synology with DSM 7. Just tested watching 3 OTA channels, while recording 5 different OTA channels (these were all high-bitrate OTA HD), while running comskip. + Also recording from 3 HD cameras in Surveillance Station.
Load averages remained lower than I have seen before with this kind of load. IO wait didn't spike like it usually does with 5 recordings and comskip.

This may be unique to my circumstance, as I am running btrfs on RAID 6. And the DSM 7 changelog does specifically list both btrfs and RAID 6 improvements with IO speeds. But I thought I should mention it anyway. I originally said this DSM should be forever avoided. But, after testing for a day, I have changed my mind. This release seems to increase the capability of my DVR.

I am sure that I will still eventually find some custom thing that needs re-configuration after the upgrade. But thats ok, it was worth it in my case due to the disk performance improvements that it added.

A DSM7 compatible spk is available on https://getchannels.com/dvr-server/#synology

Thanks, do you run this after upgrading to DSM 7.0 or before? Not sure I understand what the SPK is for.

If you upgrade from DSM6 to DSM7 then no action is required. The old SPK and installation will keep working.

Help! So I think I might have made a mistake. I performed the Synology upgrade from DSM6 to DSM7 and Channels seemed to be working ok, but I noticed that the version was older than the download file for the new DSM7 version on the Channels website.

How do I get it installed, and hopefully with it keeping all of my previous shows and information?

There is no reason to upgrade the SPK.

I think you probably need to delete it completely and reinstall at this point.

Afterwards you can do a backup restore as described here: Channels Support - How do I move Channels DVR Server to a new computer?

Correct. If you simply upgrade DSM, Channels DVR will continue to work and nothing is strictly required.

Note that the new package will automatically create a share called ChannelsDVR and is configured to use that by default on a fresh install.

Help! So I think I might have made a mistake. I performed the Synology upgrade from DSM6 to DSM7 and Channels seemed to be working ok, but I noticed that the version was older than the download file for the new DSM7 version on the Channels website.

How do I get it installed, and hopefully with it keeping all of my previous shows and information?

How do I do that? I've tried to uninstall it and reinstall it with the same error? How do I "delete it completely" (without hopefully losing all of my data)?

On the apps page it shows Channels DVR and says "Error. Please re-install the package because something went wrong."

Can you screenshot what this looks like? Maybe you can ask Synology since its their apps interface that's saying this. I have not heard of it before.

What happens when you uninstall the DVR in the apps interface? Is it still listed there?

If you enable SSH/SFTP on your NAS you can go into and delete (or rename) this folder:

Your recordings and backups are stored separately in a share, and you can use those to restore after you reinstall the software portion. 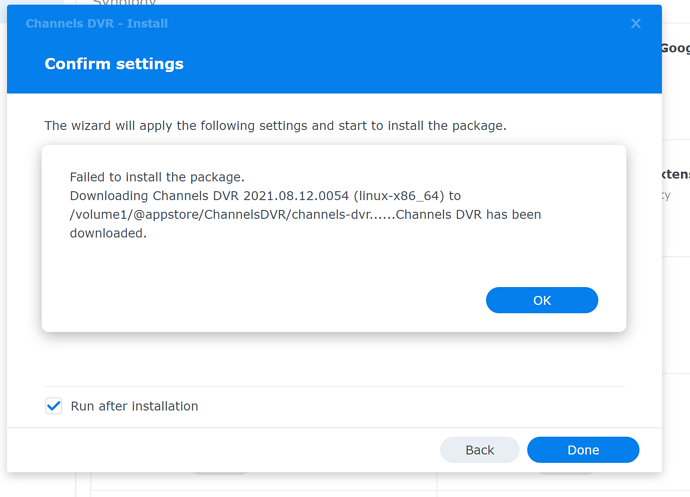 When I look in the @appstore folder after I uninstall the Channels app, there is no ChannelsDVR folder. When I try to install it again, the folder appears. 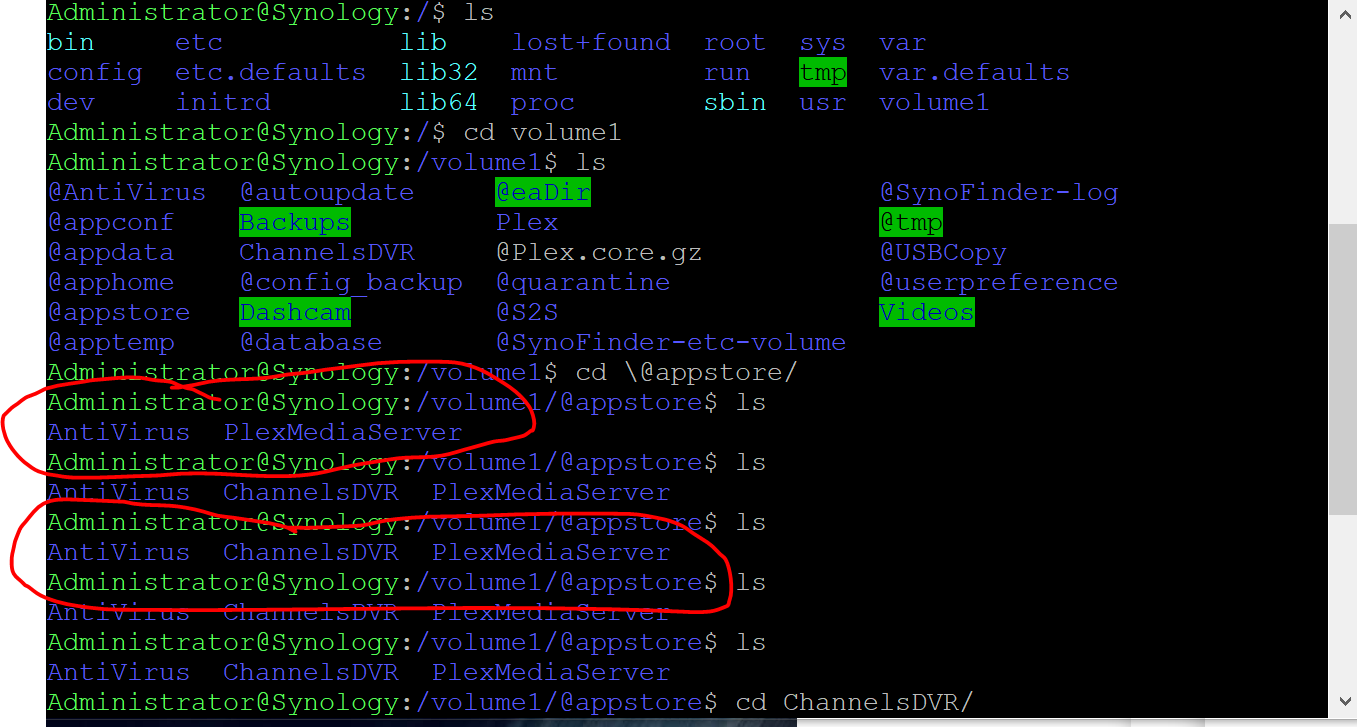 This is what happens when you install it and get the error: 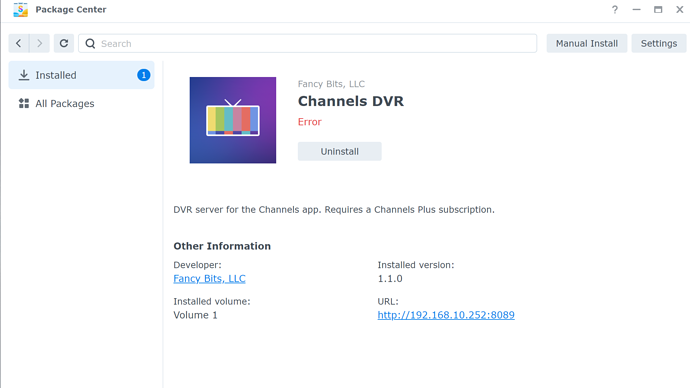 When you click Uninstall, it disappears along with the folders in the @appstore folder.

What do you see in the ChannelsDVR folder after installing?

On the root of the volume1 there is a ChannelsDVR folder with all of my data.

There does also seem to be a ChannelsDVR folder in the @apphome folder that it says I don't have permission to go into.

It should be @appstore not @apphome.

Can you try renaming the ChannelsDVR share you have to something else, then reinstall the SPK and see if that works?