We have not tried it, but it should work with the latest DVR pre-release.

Looks like the VidGo service price has doubled since they launched.

I am doing a Vidgo trial right now... When playing around today, I looked to add a TVE service in my Channels Plus settings, and there was no listing for Vidgo as an available provider to add.

I also checked the individual TVE available providers of several other networks that Vidgo carries, such as NFL Network, Fox and Paramount. And none of those networks' lists of TVE providers included Vidgo at present. 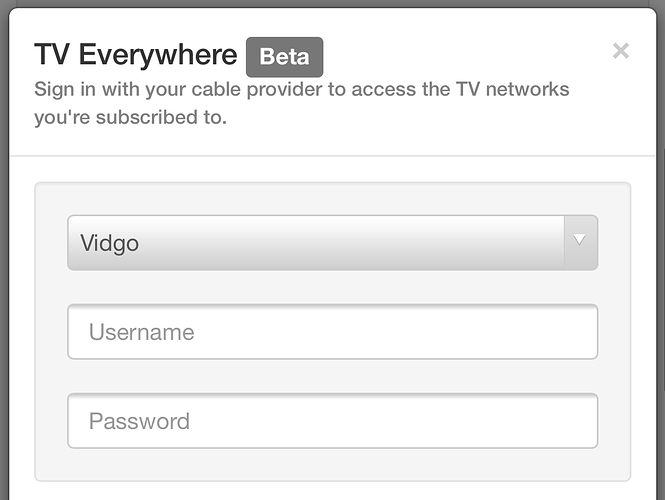 Vidgo has added support for NFL and A&E networks over TVE.

Thanks for the update on that re Vidgo... I just finished a Vidgo trial, and spend some time going thru their channels package and seeing how many of the Vidgo channels would show up in my Channels DVR setup.

When I completed that comparison a few days ago, there were A LOT of the regular cable channels offered in the Vidgo package that still were not showing as available via TVE in Channels DVR. When I did my test, NFL Network was still not avail via TVE then.

Basically, when I looked a few days ago, quite a few of the ESPN-, Disney-, and Fox-branded channels were showing up as TVE in Channels DVR. But for channels outside of those groups, not so much.

But Vidgo does appear to be working on improving their TVE situation, and customer service told me they might have some update soon... And then never bothered to communicate back to me, despite my emailing them back to ask for an update.

Anybody get Fox News and Fox Business working in Channels via Vidgo TVE?

I just signed up for Vidgo because Foxnews was one of the supported TVE channels and it's the only one not showing up.

*Upon further research, it appears as though Vidgo doesn't show up as a valid login for the Foxnews channel stream. I think a call to Vidgo tomorrow is in order.

Where do you see that Vidgo supports Foxnews?

Thanks. Does it work on fox.com/live when you login with Vidgo?

I don't think so. This is the error I get when I login using my Vidgo login...

I'm on the phone with Vidgo support right now. I'll update as soon as they give me an answer.

Just got off the phone with 2nd level support and they said access to Fox network is only available through the FoxNow app, not through the website/TVE. They are still waiting for approval to be listed as a provider on the FoxNews TVE site. Considering they were approved for the FoxNow app, they think Vidgo will be approved for FoxNews by the end of August... at the latest. The support person thinks it could be as early as the end of July.

I have the service for $29.00/month for three months, so I'll probably hang in there and see if it actually happens. Again, I'll update this post as soon as I see any changes.

Just wanted to update with the latest for FoxNews. It looks like it's been added to TVE for Vidgo. I did a rescan of the TVE channels for Vidgo and both FoxNews and Fox Business showed up and work great.

Rescan your TVE channels for Vidgo. FoxNews is there now.

Are ALL of their channels on their lower priced tier working with Channels DVR now?

Could someone post all of the TVE channels that work with Vidgo?