Youtube, WWE as well as other apps give you a prompt before going back the the home screen asking you if you would like to exit the app. This is something that is sorely needed in this app.

For example. Today I ran into an issue that was only resolved by going into the Firestick's Settings and force closing the application there and then relaunching it. This would especially helpful because if one of my family members runs into an issue they would not know the steps to solve it.

Yes, I understand that when launching the app again the startup process takes longer but add it as an option at least.

I wind up also closing it that way quite often like when I change a client setting on the web server.

The prompt in those apps doesn't actually exit or force restart the app, does it? It just makes it harder to leave the app.

I'm not opposed to a force restart button, because android does make it a pain (and it's different on FireOS too). That would probably go under Settings > Support as a button.

A prompt before the leaving the app is a different feature and one I'm not convinced is needed. A similar feature that has come up before a way to option to prevent leaving the app altogether, which would be similar in a sense to kiosk mode.

I have to disagree.

Playback stopped when watching on one of my TVE sources. I exited the app and went back into the channel and I just got a black screen. Only way to get playback working was by force closing the app in settings. Sometimes this is the only way to clear up issues that pop up. I've been using the app for a few months and after a while you get used to it. Don't know if it's the same for other users? But why not have an exit prompt instead of having to go through all these steps?

I guess I don't understand what you're asking then. You want a prompt every time you try to back out of the app, and when you say yes on the prompt the entire app shuts down and has to take several seconds to relaunch next time you try to use it?

Yes. But coming from WMC, MediaPortal and the list goes on. I don't mind waiting a few seconds.

But if that's not possible at least an option to restart the app in the settings section would also work. This way of I run into any issues and have to force close the app I wouldn't have to go through all those other steps.

Just adding my 2 cents here: this "feature" of Netflix is one of the most loathsome/annoying things about it; you can't use the Back button to exit the app, but must select Exit from the sidebar/menu.

If a Force Exit option is to be implemented, please place it under the Settings > Support hierarchy. But don't make it more difficult to actually back out/exit the app.

Needs to be togglable, is that a word, cause it would be extremely annoying to I would guess most of the user base, including myself. If I need to kill the app, a simple double click the button to get to recents and kill it. Feel like the app does a pretty good job knowing when to "preparing your tv" screen is needed or not when relaunching the app. I never close channels, just hit the home button to go somewhere else, then channels if I want to go back. Sometimes it reloads, and sometimes it doesn't. No issues. I believe this is the difference in running channels on a premium device, or a subpar firestick, no offense intended. Underpowered hardware with locked down janked up android with the sole purpose of cramming their business down your throat.

No offense taken. I've also tried Chromecast with Google TV but found the firestick the most customizable.

Emby app has this " Exit ?" conformation prompt when you back out of the app. and I freaking HATE it!

But, for other users, like my mother, who gets lost and confused when she presses the wrong button, or backs out to far, a exit confirmation may be useful.

I would love an 'are you sure" prompt added, personally, because I do find myself often accidentally exiting the Channels app, on my AppleTV, and it's kind of annoying. That said I'd only want it added if it was an option, so those who don't like it could keep it disabled, and then everyone's happy

I think this idea is like marmite, you love or you hate it, it would be nice as an option, sometimes I find myself hitting the back button too many times when I just want to go to the guide or the side menu, and find myself out of the app.

The part which I don’t know is, how fire sticks or Android TVs deal with some awkward level of multitasking they have, can we get the app to fully shut when we go off it, or do apps exist in some sort of semi open state in the back ground until it’s forced closed that’s out of our (the developers) control.

I know especially when using Picture in Picture with channels, I would like the app to close, and thus the mini instance of the playing a TV channel close too, and not be overlaid the firestick Home Screen.
But this would have to be another toggle to keep everyone happy.

Yes, I believe it’s the (very welcome!) introduction of PIP that has me regularly, accidentally exiting the app.

And it’s not a big deal to re-launch it, but the issue for me is losing the buffer, which is a bummer.

I don't know if this helps anyone, but by conditioning myself to only use the back button when I need to has prevented accidentally leaving the app for the most part. I open channels and go to the guide. I find something to watch and click it. It goes into full screen. When I'm ready to watch something else, I click the pip button, it goes into the small pip window and I'm back at the guide. Click a show from the guide. It loads in the pip, and I hit the pip button to make it big, or just click the program again in the guide to make it big. I'm using the pip button as the back button for the most part. I think I only have to actually use the back button when I'm navigating the settings menu. If I ever want to leave the app and go do something else, I just hit home, I would rather the app stay in memory. It'll reload itself of it needs to. Even with the setting turned on, I'm not sure I would ever actually see the prompt since I've conditioned myself to use different buttons.

This probably doesn't help anyone. Thanks for reading it if you did though.

If the fire tv stick had a dedicated button for pip it would help, but unfortunately on fire stick, when pip is enabled, it can only come on when you press the back button to the guide from watching a program. I do press the home button if I want to get out the app without pip turned from watching a channel, but if the pip window is open leaving the app with the home button keeps the pip window open.

I guess there is also a bit of a technical challenge depending which way the app is exited, back button or home button, and getting the app to force close either way.

If you feel like tinkering beyond what's already available, you could remap a button to be a pip button, just depends if you want to put in the effort to change a buttons function. I think there's a netflix button you could repurpose.

Actually after further investigations into my own pip button mapping, I see that it is possible to use my pip button to kill the app. Works a charm. 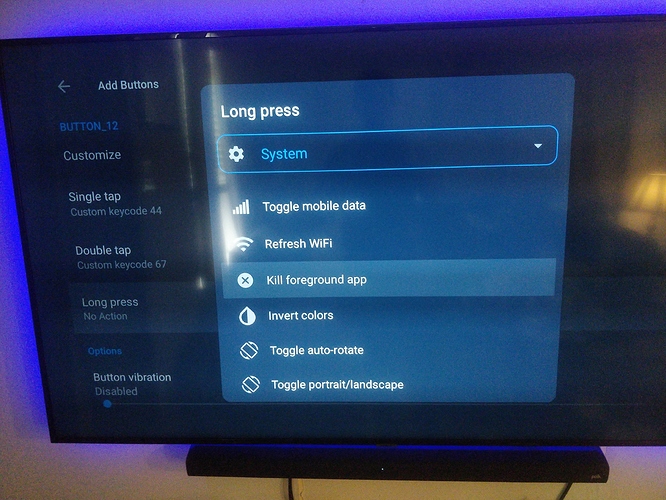 That’s impressive, what are you using?

You can refer here on how to use it:

This maybe the wrong place to post but I can’t seem to find a manual for Button Mapper. I got rid of the Pesky Netflix button on my Shield by using Button Mapper but now I’m trying to figure out if I can program a key with the letter P key so I can use PIP in Channels. I would love to use the microphone button as I never use it but I would settle for a different key if that is not possible. Any help? Thanks in advance. Sheldon