Is it expected behavior to lose the show artwork when you edit metadata for an episode?
DVR > Manage > Shows

Bunch of fixes in the latest build:

NEW: Upload images in the poster/art editor
FIXED: Custom art was not applying to some shows
IMPROVED: Newly imported episodes will inherit custom art from the show

This is fixed now.

This is awesome! Thank you @Maddox @tmm1!

I updated to v2022.03.04.2327 and images load and show on my Mac. Uploaded images showing up as blank purple box on AppleTV beta. Didn't see a new build in TestFlight. Anything I need to do to see the images?

Importing as a flat TV Show.
Many of mine end up getting automatically mismatched when imported as a flat TV Show and there is no correct match available. In order to import them, I have to choose the closest match and edit the metadata/poster.

Question here is since the closest match I select has a gracenote series id and tms show id, my understanding is the DVR will not record this if it ever airs, since it sees it already imported. So the closest incorrect match I chose would be considered already recorded, correct?

Importing as a Movie.
Same thing, have to find the closest match and edit. Same question.

The latest pre-release has a button to remove the match for movies.

We’ll work on doing the same for an imported show.

Was really excited about this ans just tried it this morning. I had some shows created with non standard urls in the 4:3 areas. On the clients, these actually were displayed, but perhaps not in the greatest quality.

Just updated the libraries with all home grown 4:3 artwork.

They appear perfect in the web server. However, in the clients they are now blank. Do i need to refresh something somewhere? 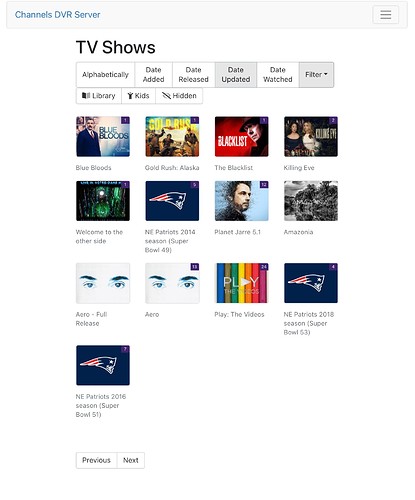 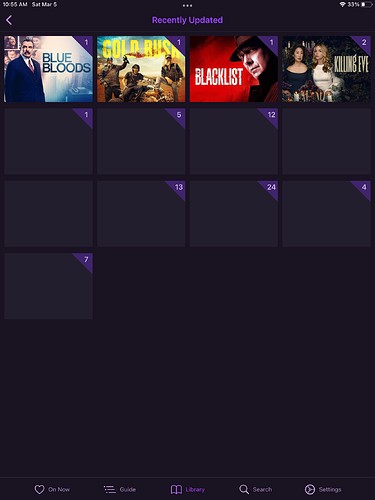 Also something i noticed that may be an issue once music videos and home videos are supported more down the road.

It would also be very nice to add local import of the 16:9 and 4:3 aspect ratio images for the collections, and the virtual channels logos to keep in line with the local import for the metadata editor.

This is awesome! Thank you @Maddox @tmm1! I updated to v2022.03.04.2327 and images load and show on my Mac. Uploaded images showing up as blank purple box on AppleTV beta. Didn't see a new build in TestFlight. Anything I need to do to see the images?

This is exactly what im seeing too. Didnt see your post and just posted the same thing…

Can i ask how people have the folder structure for these kind of files? Eg i have approx 30 random football videos from the internet. I have these in a single folder under imports/TV/ but when scanning it probably takes about 5 minutes per episode for each to finally appear in my library. So for all 30 is going to take well over an hour before they have all been added into channels for me to then edit the metadata etc.

Is there anything i'm missing or is it just that each episode takes a while to be scanned before Channels ultimately decides it cannot find a match and moves onto the next?

No issues. Infact nothing at all other than an entry each time one has eventually been imported:

Not sure if its a file name issue or whether it just takes this long as channels needs to search for several minutes before finding there is no match (there wont be). Only time i've ever come across it but then i've always added actual broadcast tv shows or movies upto this point.

And the entries are exactly five minutes apart?

If it's perfectly normal then no problem. It's the first real time i've added non broadcast tv/movie files that Channels isnt going to be able to match so wasn't sure how long it should take.

But ive been noticing this when looking at individual songs on a virtual channel. Any ideas where this image is pulled?
Do i need to regenerate the guide again? Only reason i ask, is last time i regenerated the guide something happened to the metadata and i had to go back and recreate the “series” , but it may have been a brainfart on my part at the time.

I found an old hard drive with data I held on to from the late 90's, early 2000's. I'd archived lots of favorite music videos, TV commercials, and various wacky found footage like "TV Carnage" (a precursor to Adult Swim.) I forgot I had all of this great content! Now its all organized into Collections and auto-playing on Virtual Channels... and it was so easy. Feels like a match made in heaven, this is nostalgia I wouldn't have enjoyed again if it wasn't for this platform. How very cool. Kudos to the developers

Got bless @Fofer, king data hoarder and champion of all the weird scenarios!

Yes, in 2022.03.05.1736 the main poster image is an instant change, so that seems all good. Interestingly, posters I selected a couple of days ago but didn't stick were now there, as if it was stuck before but this somehow loosened them up and made the last selection go through.

The new metadata editor has opened up a whole new world for music videos - particularly when combined with virtual channels. I put a feature request elsewhere not to hog this specific thread, but its related..

Is there a clever way to use the chapter markers embedded in most music video long play “old school” audio surround albums? Many surround music releases were delivered in dvd audio disks with chapter markers. There a ton of great music video surround albums out there. Some of these are concerts, like eagles “hell freezes over” , some are compilations, like beatles “love” and ray charles “genius loves company” , etc. Now for music videos, there is a special use case that is different than most…